Says even if Israel has to stand alone, Israel will stand but I know that Americ­a stands with Israel­
By AFP
Published: March 3, 2015
Tweet Email 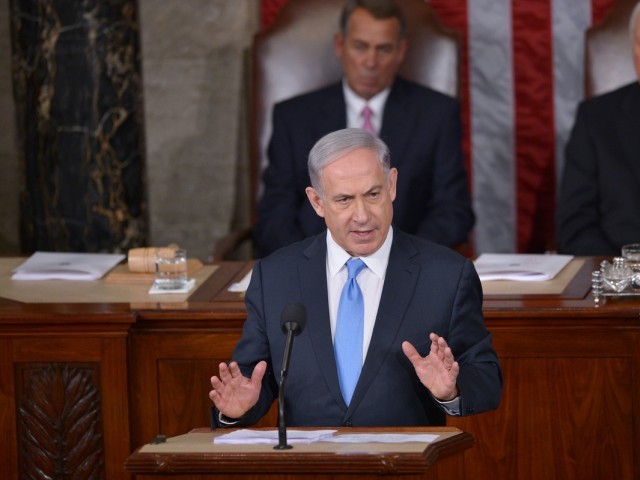 Israel's Prime Minister Benjamin Netanyahu addresses a joint session of the US Congress on March 3, 2015 at the US Capitol in Washington, DC. PHOTO: AFP

In an impassioned address to the US Congress, conducted even as Secretary of State John Kerry was in nuclear talks in Switzerland with his Iranian counterpart, Netanyahu branded Iran a global threat.

“That deal will not prevent Iran from developing nuclear weapons,” he said, placing himself in stark opposition to US President Barack Obama’s policy of containing Iranian ambitions through a diplomatic accord.

“It would all but guarantee that Iran gets those weapons, lots of them,” he said, dismissing promises from US and European leaders that the planned accord would block Iran’s path to the bomb.

Around 50 Democratic members stayed away from the event, but many more lawmakers from both sides of the aisle did attend, and Netanyahu was welcomed with a warm standing ovation and left to cheers and raucous applause.

“I know that my speech has been the subject of much controversy. I deeply regret that some perceive my being here as political,” he said, acknowledging complaints that he has endangered Israel’s close ties with Washington.

He has also been accused of using the nuclear stand-off as a platform for electioneering, two weeks ahead of Israeli polls that could threaten his ruling coalition.

“That was never my intention,” he protested. “I want to thank you, Democrats and Republicans, for your common support for Israel year after year, decade after decade.”

“We appreciate all that President Obama has done for Israel,” he said, citing the close security cooperation between the countries.

But, despite his warm opening words, his speech built to a thorough denunciation of Obama’s efforts to strike an accord, citing Iranian leaders’ threats to “annihilate” Israel and “aggression” against their Middle East neighbors.

“So you see, my friends, this deal has two major concessions. One, leaving Iran with a vast nuclear program. Two, lifting the restrictions on that program in about a decade,” he said.

He cited the strength of Iranian-backed factions in Lebanon, Yemen, Syria and Iraq as evidence of Tehran’s regional ambitions, and recalled threats against his own people.

Thus, he said, no nuclear deal should weaken economic sanctions against Iran until its government ends its aggressive stance and alleged support for terrorist violence.

“A deal that is supposed to prevent nuclear proliferation would instead spark nuclear arms race in the most dangerous part of the planet,” he warned.

“The Middle East would soon be criss-crossed by nuclear trip wires. A region where small skirmishes trigger big wars would turn into a nuclear tinderbox,” he said.

“Before lifting these restrictions, the world should demand that Iran do three things.

“First, stop its aggression against its neighbors in the middle east. Second, stop supporting terrorism around the world. And third, stop threatening to annihilate my country, Israel, the one and only Jewish state.”

And he concluded by hailing the US-Israeli alliance.

“Even if Israel has to stand alone, Israel will stand,” Netanyahu said, “but I know that America stands with Israel.

An Iranian vice-president on Tuesday dismissed Israel’s objections to nuclear talks, saying Prime Minister Benjamin Netanyahu did not have much influence.

“I don’t think (Netanyahu’s voice) carries much weight,” Massoumeh Ebtekar, who is vice-president for environmental affairs, told AFP during a visit to Paris.

“They are making their efforts to derail the deal but I think the more logical lobbies on both sides are looking forward to a solution.

“The current threats in the region – the radicalism, extremism, terrorism – this all calls for a resolution of the issue and a stronger role for Iran.”

Ebtekar said the main sticking point in the negotiations with world powers was the speed at which sweeping sanctions would be removed.

“It is and it has been from the beginning,” she said.

“These sanctions have been illegal, they are unjust. They are also adversely affecting not only our environment because they are impeding our access to new technologies to curb pollution, but also the global environment.”