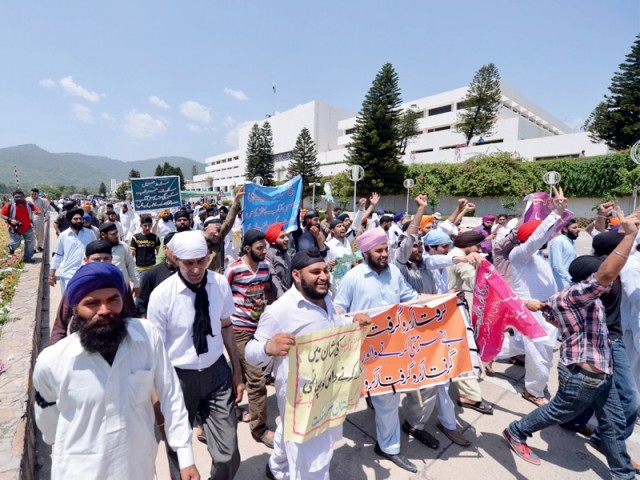 Sikh protesters chant slogans as they protest outside the Parliament House. PHOTO: AFP

Interior Minister Chaudhry Nisar suspended half a dozen senior police officials on Friday after Sikh demonstrators stormed through the gates of the Parliament House in a massive breach of security in the high-security Red Zone of the federal capital.

While the joint opposition in the Senate was in the middle of a press conference the voice of angry protesters could be heard inside the premises. The leader of the opposition continued his speech but the slogans rose to a crescendo. Soon after, the protesters broke through the main gate amid teargas shelling to protest the alleged desecration of their holy books and temples in Sindh.

Some senators instantly made a run for it, abandoning the press conference, after which the demonstrators took over the dais while security officials surrounded them.

They held placards inscribed with slogans against the desecration of their holy book in rural Sindh. They said their religious sanctity had been violated as many as seven times during the last few years. The most recent of the incidents being the desecration of the Guru Granth Sahib in Mirpur Mathelo, district Ghotki. They demanded justice from the government.

When the attention of the house was drawn to what was happening outside, Senate Chairman Nayyar Hussain Bukhari asked the leader of the house in the Senate to direct the interior ministry to conduct an inquiry and submit a report by Monday.

Senator Heman Dass told the house that he had submitted a call-attention notice on this issue but he was not allowed to speak. The Senate chairman maintained that nobody was allowed to force entry into the Parliament House premises.

The gates were closed for more than two-and-a-hours while PML-N Senator Zafar Ali Shah and MNA Dr Darshan Punshi as well as Senator Amajeet of the Awami National Party negotiated with members of the Sikh community.

The demonstrators ended their protest around 3pm after presenting their demands to the parliamentarians and receiving an assurance that their demands would be addressed.

“Our first demand is that our holy book should not be kept in a state of disrespect at temples and it should be returned to the Gurdwaras for proper care,” said Sardar Mahesh Singh, who led a 15-member delegation of Sikh leaders. “Our second demand is that the culprits should be identified, charges should be pressed against them and they should be arrested.”

Separately, speaking to the media, IGP Islamabad Aftab Cheema conceded that it was a security lapse for which the police was to be blamed. He also admitted that despite repeated calls by SHO Bhara Kahu Sattar Shah, no steps were taken to stop the protesters. Asked why they could not stop the protesters, the police officials said they kept on waiting for orders from the top officials but none came.

During a meeting Friday evening, the Islamabad Capital Territory (ICT) administration and police officials told Nisar that the protesters were violating the route assigned to them. The Sikh demonstrators were supposed to hold a demonstration outside the National Press Club but they moved towards the Parliament House when the police were busy keeping an eye on the PTI protest.

Earlier, ICT administration officials had said the Sikh demonstrators did not have any permission to protest in the capital whatsoever.