Special Court decides not to issue arrest warrant against Musharraf

Special Court decides not to issue arrest warrant against Musharraf

Mushar­raf to be kept in AFIC for two more days after failin­g to appear before court due to sudden sickne­ss.
By Web Desk / AFP / Our Correspondent
Published: January 2, 2014
Tweet Email 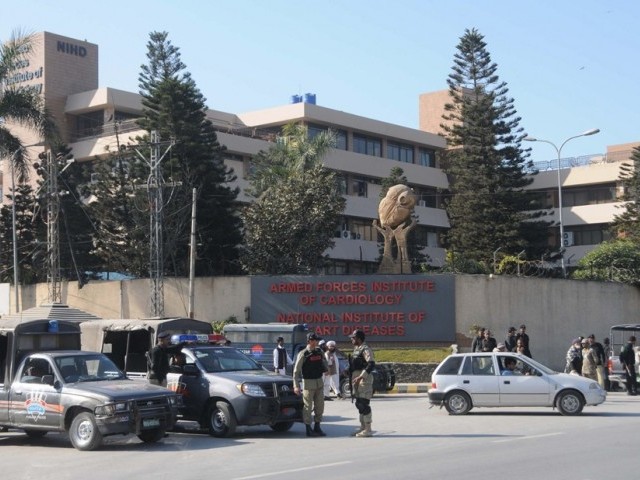 ISLAMABAD / RAWALPINDI: The Special Court on Thursday decided not to issue arrest warrant against former president Pervez Musharraf as he failed to appear before the court due to sudden sickness, Express News reported.

The hearing will resume on January 6.

According to the short order issued after today’s proceeding, Musharraf was exempted from personally appearing before the court on medical grounds.

Even as Musharraf’s condition now is reported to be safe, doctors at the Armed Forces Institute of Cardiology have decided to keep him at the hospital for two more days as a precaution. He will be undergoing medical tests in this period.

The former military ruler faces treason charges under Article 6 for suspending, subverting and abrogating the Constitution, imposing an emergency in the country in November 2007 and detaining judges of the superior courts. It is the first time in Pakistan’s history that a former military ruler has been put on trial for treason.

Musharraf fell sick on his way to the hearing of the treason case in the special court and his convoy was redirected to the Armed Forces Institute of Cardiology in Rawalpindi.

According to government officials, Musharraf complained of pain in his heart and was immediately taken to the hospital. Musharraf has now been transferred to the Coronary Care Unit from the Intensive Care Unit and is still being provided with medical assistance.

Former military chief’s wife Sehba Musharraf also arrived at the hospital to be with her husband. She was, however, not allowed to see him.

Express News screengrab showing Musharraf’s convoy on its way to the hospital.

The heart rate of Musharraf is reportedly not stable and a medical board was constituted to examine his health condition. The former military ruler will undergo angiography soon. Decision to treat him in Pakistan or abroad will be taken by the medical board after diagnosis.

Jan Mohammad, a senior police official, told the court in Islamabad that Musharraf had fallen ill while being transported to the hearing under heavy security.

“He has been shifted to Armed Forces Institute of Cardiology after he got heart problem,” Mohammad said.

An aide to Musharraf, who is facing a series of criminal cases dating back to his 1999-2008 rule, told AFP the retired general was in “bad shape.”

The special court had earlier ordered Musharraf to appear before the court today or face consequences.

It has reserved its decision of the hearing of the case today and will announce it at 4pm.

On the request of senior counsel on Musharraf’s legal team Anwar Mansoor Khan, the hearing of the treason case has now been adjourned to January 6.

While speaking to the media, Musharraf’s lawyer Ahmed Raza Kasuri said “the former president was ready to appear before the court today but could not come as he suddenly fell sick.”

On questions from journalists expressing suspicion over Musharraf’s sudden sickness, Kasuri stated that the media personnel should go and talk to the doctors to know what happened to the ex-army man.

Lashing out at Akram Sheikh, Kasuri said a prosecutor’s job is to assist the court and not to ensure punishment. “He is not a prosecutor but a persecutor.”

The press release also added that Musharraf is undergoing medical tests and that the thoughts of his well-wishers are with him.

Khan told the court he has been receiving threats and was unable to sleep the night before the hearing.

“I was under total threat… from 1:00 am to five in the morning. Someone was banging on my door and ringing my bell,” Khan told the court.

When one of the judges asked who was threatening him, Khan answered, “This very government.”

The court promised to investigate but Khan walked out of court, followed by other members of Musharraf’s legal team.

“This never happened in my 40 years of practice. I will walk out,” Khan said.

Senior lawyer Sharifuddin Pirzada, who is defending Musharraf, also complained of being threatened. He stated that lawyer Akram Sheikh, who represents the government, sent threats to lawyer Ibrahim Satti who is part of the legal team defending Musharraf.

“Akram Sheikh should have an attitude of a lawyer,” said Satti.

Sheikh on the other hand denied the allegations stating that “Ibrahim Satti was given a message that the atmosphere of the court should be made better.”

“It is very difficult for me to even walk, how could I have given threats to anyone,” he remarked.

Justice Faisal Arab replied after hearing about these threats that necessary security arrangements will be made for their safety.

To this, Khan replied that “I do not trust the security provided by the government”.

The former president had failed to appear before the court on January 1 citing security threats. Musharraf’s advocate Ahmed Raza Kasuri had said that security was still an issue, stating that a kilogramme of explosive materials was found near Musharraf’s farmhouse this morning.

This was the third time that small quantities of explosives have been found near Chak Shahzad farmhouse. On December 31, 2.5kg of explosives were found around two kilometers away from the farmhouse.

A 5kg bomb, two pistols, a five-meter detonator wire and 16 bullets were also recovered on his route to court on December 24.