Musharraf can be arrested without a warrant, says Justice Faisal Arab

Musharraf can be arrested without a warrant, says Justice Faisal Arab 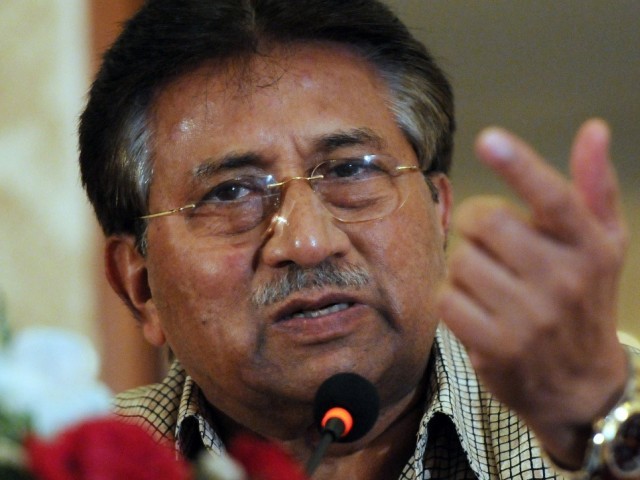 ISLAMABAD: During the hearing of the treason case against former president Pervez Musharraf, Justice Faisal Arab said Musharraf’s offense is non-bailable and he can be arrested without a warrant, Express News reported Wednesday.

The former president failed to appear before the court today, citing security threats. Musharraf’s advocate Ahmed Raza Kasuri said that security was still an issue, stating that a kilogramme of explosive materials was found near Musharraf’s farmhouse this morning.

This is the third time that small quantities of explosives have been found near Chak Shahzad farmhouse. On December 31, 2.5kg of explosives were found around two kilometers away from the farmhouse.

A 5kg bomb, two pistols, a five-meter detonator wire and 16 bullets were also recovered on his route to court on December 24.

Musharraf had failed to appear before the court on December 24 and the hearing had been adjourned to today. He was due to appear before the special court to face treason charges under Article 6 for suspending, subverting and abrogating the Constitution, imposing an emergency in the country in November 2007 and detaining judges of the superior courts.

Justice Faisal Arab retorted that courts continue to operate during wars, adding that Musharraf cannot avoid the hearing because of security threats.

Musharraf was provided with adequate security to come to court and return to his farmhouse after the hearing, Security Division Jan Mohammad told the court.

When asked if the former president was provided with a bullet-proof car, the DIG said he was not given one.

During the hearing, Kasuri alleged that Prosecutor Akram Sheikh was Prime Minister Nawaz Sharif’s cohort to which Sheikh responded, “If the court thinks I am biased, I will leave right now.”

Musharraf’s counsel also requested the court to delay the hearing for five weeks.

The hearing was adjourned to Thursday by a three-member bench. Musharraf was asked once again to make the appeal in person.

Musharraf had dismissed the treason charges against him as politically motivated and is expected to appear in person, after legal efforts to have the tribunal ruled invalid failed.

It is the first time in Pakistan’s history that a former military ruler has been put on trial for treason.

Prime Minister Nawaz Sharif, who won a third term in May’s general election, was the man Musharraf ousted in his 1999 coup and the former general’s lawyers say he is using the case to exact revenge.

Since returning from self-imposed exile in March to run in the election, Musharraf has faced a range of serious criminal cases dating back to his 1999-2008 rule.

He stands accused of murder over the death of former prime minister Benazir Bhutto, killed in a gun and suicide attack in December 2007, as well as charges over the death of a rebel leader, a military raid on Lal Masjid and the detention of judges.

Musharraf was put under house arrest in April over the cases but was granted bail in each, one by one.