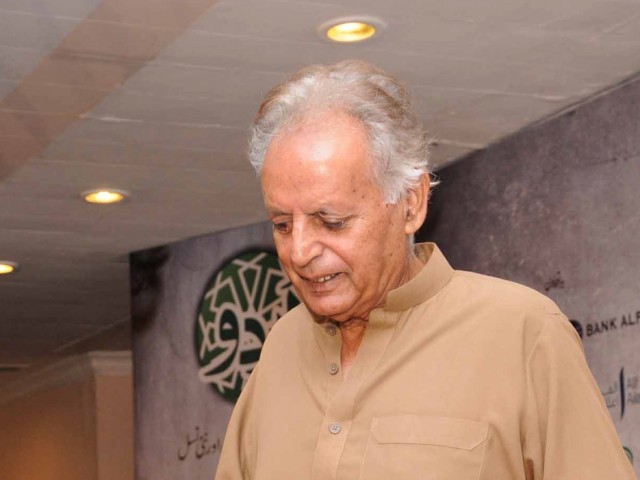 Th e best thing about dictatorial leadership is that it is temporary. When the society takes up that role, it can be permanent, says Mustansar Hussain Tarrar. PHOTO: EXPRESS/WASEEM NIAZ

LAHORE: “In a society that accepts extremism as its identity, how can anyone exercise freedom of speech or expression?” Columnist Saleem Raaz said, “How can writers find the courage to challenge such ideas?”

The second session of the concluding day of the Second International Urdu Conference was themed Chaos in the Pakistani Society and the Role of Writers. The panellists engaged the audience for almost two hours with a discussion of how writers have played a role, if any, in the society’s descent into chaos.

The changing role of writers throughout the history of Pakistan was deliberated at length, in view of the current social, economic and political situation, and described as being simply chaotic.

“You either stand with the aggressor or the aggrieved,” Raaz said, “A writer must make his stance obvious.” Raaz is chairman of the Global Pashtu Conference and general secretary of the Association of Progressive Pakistani Writers.

“Our work should be based on truth,” he said, “Unfortunately that’s not what we do or speak.” He criticised the society for its lack of tolerance towards ideologies that challenged social norms.

Raaz regretted the transformation of social interaction. “Though the internet has helped bridge distances, people have become confined indoors,” he said. Raaz blamed a ‘false linkage’ between religion and nation state for Pakistani society’s identity crisis. Writer Masood Mufti said that he saw writers as victims because of the society’s closeted mindset that did not allow one to challenge ideologies. “Writers’ freedom of expression, over the years, has been throttled to the point of silence,” said Mufti, “And yet this victimisation allows for greater impact.”

Fiction writer Zahida Hina said, “The seeds of chaos were sown in the first year of Pakistan’s existence.” The nation became consumed by debates that centred more on differences than commonalities. She blamed writers, poets and journalists for taking the back seat. “We shouldn’t forget how many of us were silent in times of crisis,” said Hina, “During the 1971 conflict, many writers lauded the oppressors instead of condemning the atrocities being committed in East Pakistan.” She stressed the need for writers to analyse situations carefully because “it is our duty to be committed to truth,” she said.

Playwright, novelist and television anchor Mustansar Hussain Tarrar said certain elements in the society sought to punish those who defied their norms. “These elements [in our society] have dictators,” he said, “Very much like General Ziaul Haq.”

Tarrar said that was horrifying. “The best thing about dictatorial leadership is that it is temporary,” he said, “When the society takes up that role, it can be permanent… that scares me.”

He said that there had been times when he had received death threats for sharing his beliefs. “When such aggression is projected by a person you know they will eventually leave. But when the society agrees with that person, one needs to be worried,” he said.

Tarrar’s speech, chock full with wit and sarcasm, conveyed a simple message, “A society must have a character before it goes ahead and judges others’ character criticises the character of others.”

Journalist Masood Ash’ar said that persecution of writers had been routine. “Writers express their observations about the society through their creations,” he explained, “When there is harassment and victimisation, writers are often abandoned.”

Writer Saleem Akhtar believed that ‘chaotic’ was not the best word to describe the society. “It is anarchy,” he said, “not just chaos.” Efforts to seek and deliberate the truth in a society so opposed to intellectual pursuits is futile. “It is a pity how the dream for Pakistan has turned into a nightmare,” he lamented.