Reign of terror–day 3: No let-up in poll violence

Reign of terror–day 3: No let-up in poll violence 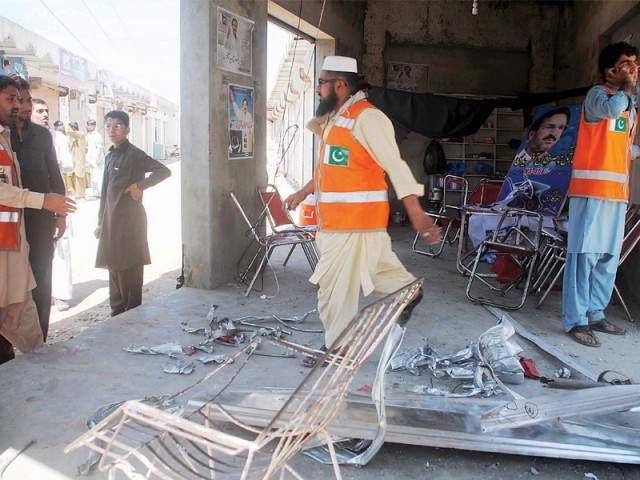 Destruction at the office of independent candidate after a bomb blast in Peshawar. PHOTO: MUHAMMAD IQBAL/EXPRESS

KOHAT / PESHAWAR: At least nine people were killed and over 50 injured in a string of attacks targeting election candidates and their supporters in different towns and cities of the country.

Three of the attacks targeted the Awami National Party which, together with two other secular parties – the Muttahida Qaumi Movement and Pakistan Peoples Party – have been bearing the brunt of violence unleashed by the outlawed Tehreek-e-Taliban Pakistan (TTP).

At least four people were killed and over 22 injured in a bomb blast near the office of an independent candidate from Orakzai Agency in the Kacha Pakha Camp area of Kohat.

The explosion took place around 9.30am near the office of Syed Noor Akbar Ali Orakzai, an independent candidate from NA-39 (Tribal Area-IV Orakzai Agency), according to District Police Officer Dilawar Bangash.

Bomb Disposal Squad official Akbar Khan told The Express Tribune that it was a remote-controlled device weighing around 10 kilogrammes. He added that the blast damaged three nearby shops and two vehicles. It also damaged the election office of ANP candidate Khursheed Begum.

According to officials, three of the critically injured were shifted to the Lady Reading Hospital (LRH), Peshawar.

Separately, a bomb went off outside the election office of independent candidate Nasir Khan Afridi in the Maqsoodabad area of Peshawar, killing three people and wounding more than 19.

The remote-controlled device was strapped to a bicycle parked outside Afridi’s office. Two of the three deceased men were identified as Internally Displaced Persons (IDPs) from Bara, in Khyber Agency.

According to BDS officials, three kilogrammes of explosives were used in the device. Afridi called it an act of terrorism – but added that the evil designs of the enemy would be foiled.

When asked whether he was provided security, Afridi said routine security had been provided to his election office but no special arrangements were made as there weren’t any threats.

Assistant Commissioner Peshawar Asad Khan said that terrorists have been targeting corner meetings and election rallies. “[However], we have provided complete security to all candidates,” he added.

In a third such incident, one person was killed and 10 ANP activists were injured when a remote-controlled bomb exploded at the election rally of Amir Rahman in the Dost Muhammad area of Swabi district.

Amir Rahman, former member of the provincial assembly and ANP’s candidate for PK-32, had left the area when the bomb was detonated.

Mukhtiar Khan, SHO Parmoli police station, said that the bomb exploded when ANP workers were leaving the venue of the rally. He added that a 13-year-old boy, identified as Zain Muhammad, was killed and 10 ANP workers were wounded.

Eyewitnesses told the police that after the explosion suspected militants, hiding on the other side of a canal opened fire at ANP activists, injuring three people.

The injured were shifted to Kalu Khan Rural Health Centre, where another child is said to be in critical condition.

Meanwhile, suspected militants targeted the house of the ANP senior vice president in Bannu, Malik Sheroz Khan, with a bomb in the Khujri area, on the outskirts of Bannu city, Sunday night.

Kakki police station official Jalil Khan said the explosion occurred around 10.45 pm. The bomb, he said, was planted in a canister placed on the boundary wall of Sheroz’s house. No loss of life was reported as the residential area was at a distance from the spot of the explosion.

In yet another attack, ANP’s local leader Ghazi Gul was shot dead near his residence in Musharraf Colony, Karachi.

Police said the victim was on his way home when two gunmen riding a motorbike shot at him multiple times, killing him shortly after the incident.

Gul’s body was taken to the Civil Hospital for autopsy where a score of ANP supporters had also gathered to protest his killing.

ANP’s District West Information Secretary, Zaman Chagharzai, blamed the Taliban for the killing. He added that Gul had received life threats from militants.