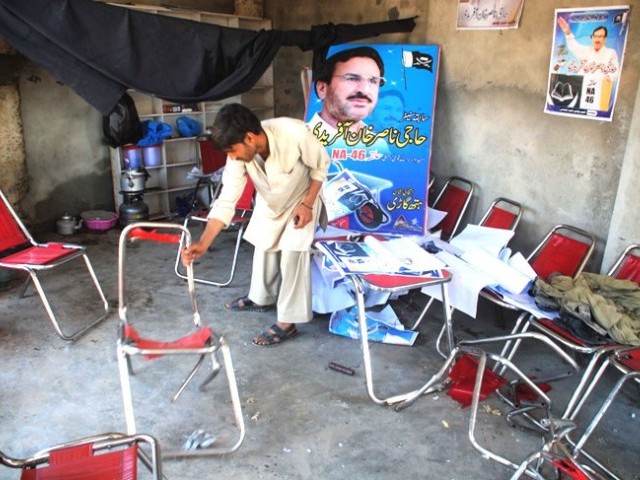 The election office of Nasir Khan, after the blast. PHOTO: MUHAMMAD IQBAL/EXPRESS

PESHAWAR: Three people were killed and 19 other injured in a bomb blast at an election office in Maqsoodabad area, Peshawar on Sunday.

The device exploded outside the election office of independent candidate Nasir Khan, in Maqsoodabad, Landai Sarak in the jurisdiction of Khazana police station. Khan is contesting elections from the constituency of NA-46 and has previously served as a senator.

He is a Qamber Khel Afridi by clan from Khyber Agency. The remote controlled device had been planted on a bicycle which had been parked outside the election office. The election office and the surrounding area was crowded at the time of the explosion.

The injured were shifted to the Lady Reading Hospital. Soon after the attack, security forces cordoned off the area for investigation.

The Tehreek-i-Taliban Pakistan claimed responsibility for the attack.

It is the second explosion of its kind after the April 16 deadly suicide attack at ANP’s corner meeting on Munda Beri Road, Yakatot.

Earlier today, a bomb exploded outside the office of an independent candidate in the garrison city of Kohat, which is adjacent to Pakistan’s restive tribal areas along the Afghan border.

“The IED was planted outside the election office. At least five people have been killed and 22 injured,” city police chief Dilawar Khan Bangash said.

Taliban militants have stepped up attacks on politicians in an attempt to sabotage the first democratic transition of power in the political history of Pakistan.

A string of bomb blasts killed many and injured dozens in different parts of Pakistan, heightening fears of increased attacks ahead of next month’s general elections.

The ANP, MQM and PPP have faced the brunt of the ongoing attacks.

Correction: An earlier version of the story mistakenly mentioned the constituency as PK-8 and the candidate as a member of the PML-N. The error is regretted.