Sticking to his guns: Defiant Qadri vows to go the distance

Sticking to his guns: Defiant Qadri vows to go the distance 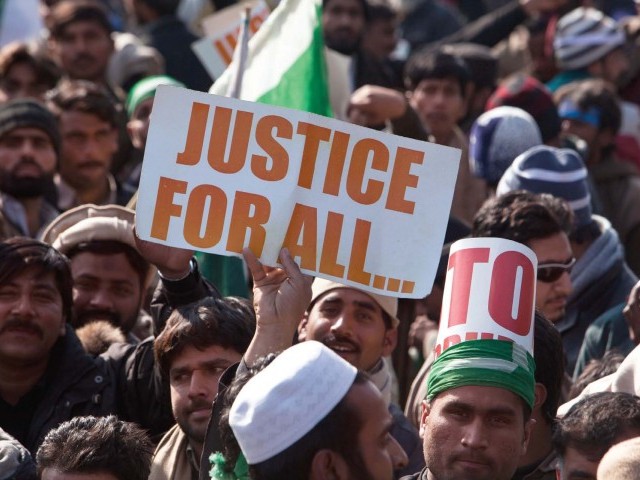 Two fiery speeches and an expired deadline later, both supporters and detractors of Dr Tahirul Qadri wait to see whether he will be able to sustain the momentum he has built.

The Minhajul Quran International (MQI) chief’s second address to the marchers coincided with the Supreme Court’s order for the prime minister’s arrest, raising more than a few eyebrows, and prompting a fresh round of frenzied speculation.

In his 11 am speech, the MQI chief instructed his followers to remain peaceful and determined. “No force on earth could stop these people from taking over the parliament building if they wished to do so,” said Qadri. “But we are here to end chaos, not to create more chaos,” he added, while promising he would deliver the second half of his speech today (Wednesday).

The crowd at Jinnah Avenue erupted in celebration, dancing and cheering as the cleric broke the news of the Supreme Court’s orders for Prime Minister Raja Pervaiz Ashraf’s arrest. “Half of our job is done. I congratulate you,” he told his charged followers.

Before he made his speech, authorities made an attempt to arrest Dr Tahirul Qadri but were prevented from doing so by his supporters.

A group of the Anti-Terrorism Squad (ATS), led by a Superintendent of Police (SP), closed in on the sit-in and resorted to aerial firing before trying to enter Qadri’s container by force.  However, dozens of women rushed to the container and blocked off the police before other security volunteers of the MQI reached the spot.

The incident triggered a brief clash between protestors and police, resulting in injuries to eight people including an inspector of the Islamabad police.

“One bullet hit Dr Qadri’s container while some police officers tried to snatch the keys of the truck from the driver, who resisted,” said a member of Dr Qadri’s security squad.

The MQI management later approached the Kohsar police to register an FIR against Interior Minister Rehman Malik, Senior Superintendent of Police (SSP) Islamabad and 16 other police officials for ‘trying to kidnap’ the MQI chief.

The police registered a report but did not register an FIR, saying they would ask for their legal branch’s opinion before filing one.

After the failed arrest attempt, fresh contingents of the Punjab Police, requisitioned by the city administration, started arriving behind the wall of containers that stood between the protestors and parliament.

A police official said that after the arrival of 8,000 more personnel, the total number of Punjab police deployed at the spot crossed 20,000.

These were reinforced by platoons of Azad Jammu Kashmir (AJK) police, who were deployed between the protestors and Constitution Avenue. Behind them were platoons of Rangers and Frontier Constabulary (FC), ahead of Pakistan Army officials who were especially deployed to protect the Parliament House. Air support was also at the ready, in the shape of helicopters gunship that kept hovering overhead the whole day.

Despite the massive reinforcements, a senior official of the administration said the government had no plans to use force against the protestors or to arrest Dr Qadri.

After preventing the arrest of their leader and shifting the venue of the sit-in to D-Chowk, thousands of participants of Dr Qadri’s ‘Jamhuriat March’ massed around his bullet-proof container outside Parliament.

Dr Qadri said that he did not intend to take over the Presidency or the Prime Minister’s House, nor did he want to commit any unconstitutional or unlawful act. Instead, he cast himself in the role of democracy’s savior. He claimed that he had gathered ‘millions’ of people in front of parliament for the sole purpose of demanding a meaningful change.

“We want to make members of the incumbent system accountable for their corrupt practices and answerable to the law of the land,” said the MQI chief. He also praised the military and the judiciary for doing their jobs with sincerity.