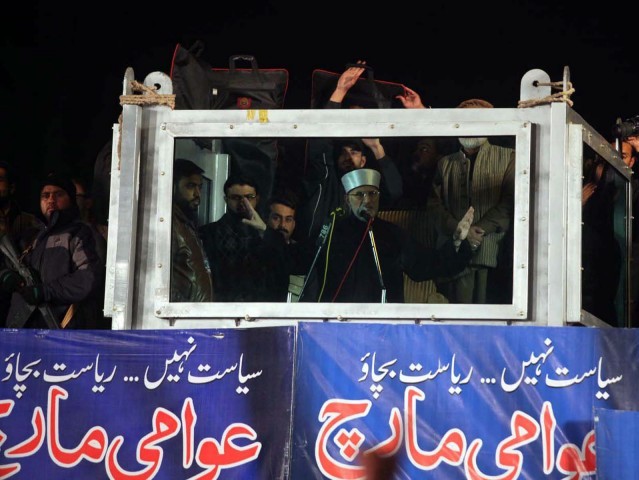 The Dr Tahirul Qadri ‘revolution’ seems to be continuing. As of now, the future looks uncertain. The 11:00am January 15 ‘deadline’, given for assemblies to be dissolved, a caretaker set-up established and kept in place till sweeping reforms were introduced and the electoral system changed, came and went with nothing significant taking place in Islamabad. The government, after a meeting — rejected the demands as the deadline approached, terming them ‘unconstitutional’, as they undoubtedly were. A few minor skirmishes between Dr Qadri’s assembled band and security forces took place as Dr Qadri asked his supporters to stay in Islamabad. As events continue to unfold, there is no saying what will happen next over the coming few hours, or the coming days.

What truly ruffled the leaves and sent a storm sweeping around Islamabad and the rest of the country came right in the midst of Dr Qadri’s address, as the Supreme Court (SC) unexpectedly announced orders for the arrest of the prime minister (PM) within 24 hours, in the Rental Power Project case. This decision suddenly raised the temperature close to boiling point, with uncertainty mounting and the Karachi Stock Exchange closing 500 points lower. Conjecture continues, so do meetings of the top parties. Many things are up in the air with questions being asked about the timing of the SC verdict, as well as its significance. While legal experts hold that Raja Pervaiz Ashraf technically remains PM, as he has not been convicted, the prospect of a sitting PM’s arrest, possibly from his office, dominates minds.

Dr Qadri’s enthusiastic, indeed euphoric, response to the Court verdict also brings comment. It is impossible to say if the two events are linked; some continue to argue they are not — though Dr Qadri’s reaction certainly did not suggest this. Nor did his ominous warning that the ‘rest’ would happen soon; none of this is comforting. Are strings being pulled from somewhere? Will other events follow? Regardless of where the truth lies, the convergence of all these matters has undoubtedly created a crisis. Just the degree of questioning over what will happen next further adds to uncertainty. Such a situation is not healthy for our nation or our democracy. Our history of interventions from forces, which should not play a part in governance, adds to the ongoing debates and arguments. We can only hope things will settle down and that normalcy will return. But the fears being expressed are disturbing — even though they build on the people’s desperate need for change.

This brings us back to Dr Qadri. The demands put forward by him are, to put it mildly, bizarre: A long-term interim government, just ahead of a scheduled poll when people can make their own decisions about the present set-up, makes no sense. Nor does the call for reform; in a democracy this should by right come through parliament. In this context, the comparisons made by Dr Qadri to the uprisings against dictatorships in the Middle East make little sense. Where we stand can change through the ballot, which lies just around the corner.

A key question, still is, why Dr Qadri chose to make his move. While all major parties backed away, the MQM remains somewhat ambiguous, with Altaf Hussain again backing his demands on January 14. The suspicions remain that a ‘pro-Establishment’ force backed Dr Qadri. The events of January 15 support this theory. Many suspect this. And while no revolution has come, the long march has focused attention on the disgruntlement of people with years of misgovernance. Corruption has been a focus and the fact that many, not linked to Dr Qadri’s party, joined the protesters in Islamabad puts forward a message of its own, thereby signifying the desire for change. It is a message the government would do well not to ignore, with the call for change evident, even if the demands themselves are contentious and have been backed by all major political parties, who have opted for polls over a caretaker set-up. Much will now depend on the decisions made by these parties.