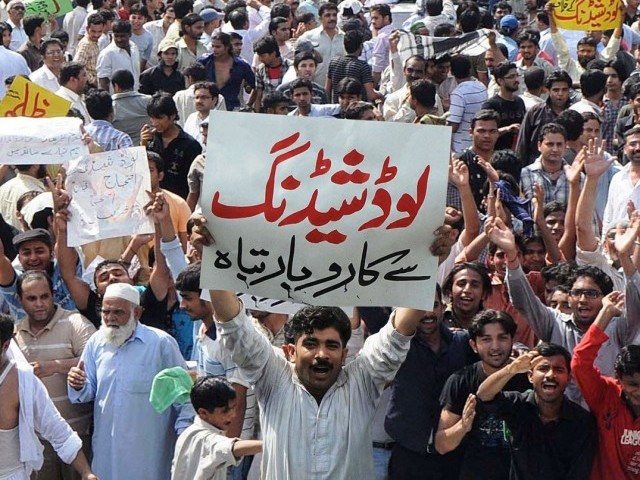 KARACHI: Loadshedding and power protests continued in Punjab, with the electricity shortfall quoted at 8,000 megawatts and some areas reported to be without power supply for longer than eight hours at a stretch, Express News reported on Monday.

Prime Minister Yousaf Raza Gilani has taken notice of the prolonged electricity outages and has summoned the petroleum minister.

Authorities said in order to cope with the increasing shortfall of power supply, loadshedding had to be stretched to longer hours.

Grid stations in different areas of Lahore have been shut since 7am. Moreover, due to prolonged absence of power supply in southern Lahore, the city suffers from a shortage of water supply as well. Areas like Jhang, Toba Tek Singh and Chiniot receive power supply for only three hours a day.

Sukkur and internal Sindh cities face 12hours of loadshedding daily, while villages go through 16 hours of no power supply. As a result of the severe energy crisis, businesses are suffering, and hundred thousands of labourers are unemployed.

Three bogeys of a passenger train were set on fire by angry protestors in Kamoke. The train was travelling to Sialkot from Lahore.

According to GM Railways, this step has been taken to avoid protesters from damaging further more trains.

The protestors had first pelted the train with stones, forcing the passengers out, before setting it on fire. No casualties were reported in the incident.

Earlier in Kamoke, protestors had also tried to set grid stations on fire.

Infuriated mobs in different areas of Faisalabad carried out rallies against the ongoing power crisis, while enraged people pelted stones and broke windows of three private banks near Dhandiwala. Protestors damaged ATM machines and CNG stations in the area.

Protests continued despite baton charging by the police. The mob looted stores and stole from fruit vendors.

Traffic was blocked by burning tyres on Marine Road.

Protestors armed with sticks in Khanewal, forcefully shut down shops of the area. The SHO of the city arrived on the scene, infuriating the mob even further. As a result the SHO took hostage in a house, on which the protestors started stoning the building.

The demonstrators were dispersed through aerial firing and shelling which injured seven.

Infuriated protesters barged into the LESCO (Lahore Electricity Supply Company) office, burning documents and furniture, and ran away with the electricity wires.

Protests continued for several hours while police was nowhere to be seen.

The GT Road was shut down due to the protests at Sadhuki.

Wapda offices and educational institutions were set on fire near Sargodha.

The Gepco office was set on fire in Hafizabad, while at Zafarwal, Federal Minister Tariq Anees’ caravan was stopped. Three people were injured when the guard opened fire.

View pictures of the protests here.

YouTube video of the day: A dose of Isloo