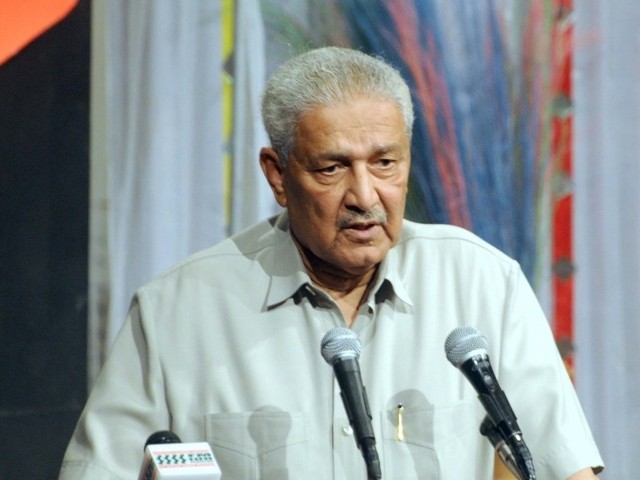 " If the SC said that Gilani could be disqualified, why did they not disqualify him themselves?," Dr Abdul Qadeer Khan. PHOTO: QAZI USMAN/ EXPRESS

Addressing the Lahore Bar Association at Aiwan-i-Adl, Khan also said that the SC must decide all cases on ‘merit’.

He said that Prime Minister Yousaf Raza Gilani was still in office despite being convicted.

“If the SC said that Gilani could be disqualified; why did they not disqualify him themselves?,” he said.

He said that a similarly ambiguous decision had been handed down in the case concerning Rehman Malik’s dual nationality, who had been re-appointed adviser to the prime minister after his membership of Senate was suspended.

He said that Malik was not the only public official in the country with a dual nationality. He said the SC needed to set down clear guidelines to deal with such cases.

He said that the youth must exercise their right to vote in the coming elections to bring sincere leaders to power to replace the current lot of politicians. He said that the fact that most of Pakistan’s 40 million young registered voters did not vote reflected poorly on the people. He said that everyone must vote to improve things in Pakistan.

He said that corrupt politicians were looting the people and claiming to be pro-poor.

He said he was disappointed that while people were being massacres in Karachi even Sindh Chief Minister Qaim Ali Shah had not tendered his resignation. He said that people being killed in drone attacks in the tribal areas were being falsely labelled ‘militants’.

He said revolutionary change in Pakistan had started from Lahore. He said that lawyers must maintain the dignity of their black coats and not throw shoes at judges.

About politics, he said, “Politics leads to [perils like] Kufa but if a situation arises, I will tread that path.”

He said that he was offered nationality in Saudi Arabia and UAE but he preferred to live in Pakistan.