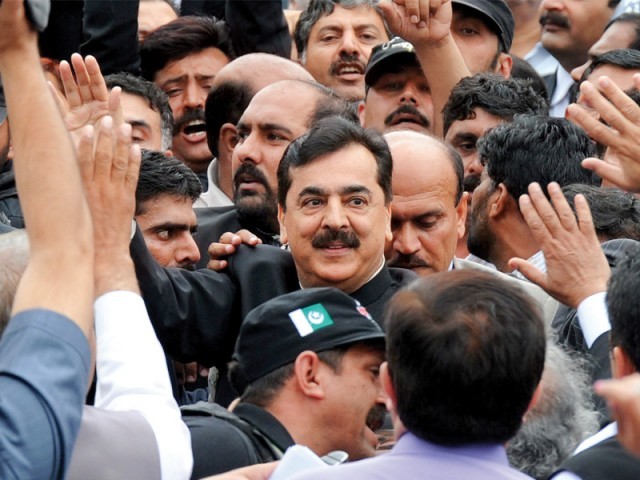 PM Gilani escorted by security as he leaves the Supreme Court. PHOTO: AFP

If the conviction was historic, the sentence was largely symbolic – detaining the prime minister in courtroom number 4 till the “rising of the court” or about 37 seconds to be precise.

“For reasons to be recorded later, the prime minister is found guilty of contempt for wilfully flouting the direction of the Supreme Court,” said Justice Nasirul Mulk, heading the seven-member bench delivering the verdict.

However, the prime minister’s counsel later declared that the conviction would be challenged.

Run-up to the verdict

Earlier on Thursday, the sun rose to a frenzied capital.

Riot police and elite security personnel lined the path leading to the Supreme Court, as helicopters hovered in the airspace above.

A lone commando carrying an AK47 stood guard under the national flag, hoisted at the top of the apex court building.

Enthusiastic journalists took their positions inside and outside the courtroom, wondering if the day will bring an end to months of speculation on the prime minister’s future.

First to arrive at the venue was Information Minister Qamar Zaman Kaira, who headed straight to television cameras and said: “Pakistan Peoples Party (PPP) has always been victimised … but we have not lost hope.”

At 9:10am, the premier’s motorcade appeared on Constitution Avenue.

Unlike last time, when Gilani arrived at the court in his SUV, this time he drove up to the court in a sedan.

Dressed in a black Sherwani, the prime minister stepped out of the driving seat, and was swarmed by ministers who were waiting for him. An eager Rehman Malik stepped forward to hug the premier.

Flanked by his cabinet colleagues, security and supporters, the premier headed to courtroom number 4 – he reached there by 9:20am.

The bench arrived at 9:38pm – eight minutes late – and the judges started to sign the two orders they were about to announce.

Gilani went to the rostrum, along with his counsel Aitzaz Ahsan, and Justice Mulk started reading out the order.

“For the reasons to be recorded later, the accused Syed Yousuf Raza Gilani, Prime Minister of Pakistan/Chief Executive of the federation, is found guilty of and convicted for contempt of court, under Article 204 (2) of the Constitution of the Islamic Republic of Pakistan, 1973, read with Section 3 of the Contempt of Court Ordinance (Ordinance 5 of 2003) for wilful flouting, disregard and disobedience of this court’s direction contained in paragraph number 178 of the judgment delivered in the case of Dr Mubashir Hasan versus the Federation of Pakistan (PLD 2010 SC 265) [The NRO case]. After our satisfaction that the contempt committed by him is substantially detrimental to the administration of justice and tends to bring this court and the judiciary of this country into ridicule.”

“As regards the sentence to be passed against the convict, we note that the findings and the conviction for contempt of court recorded above are likely to entail some serious consequences in terms of Article 63 (1) (g) of the Constitution which may be treated as mitigating factors towards the sentence to be passed against him. He is, therefore, punished under Article 5 of the contempt of court ordinance (ordinance 5 of 2003) with imprisonment till the rising of the court today.”

The time it took for the “court to rise” was about 37 seconds.

During the sentence time, Aitzaz requested that he wished to say something – but the bench paid no heed to his request and left the courtroom.

A visibly-composed prime minister went up to Aitzaz, to discuss the consequences of the verdict announced.

At 9:45am, the premier stepped out – a convicted, but free man. He had been spared a stint at Adyala jail.

There were no slogans outside though, possibly because supporters did not understand the implication of the court orders.

For quite some time after the verdict was announced, no one seemed to know what had happened. The court had cited Article 63 (1) (g) of the Constitution, which spells out disqualification criterion for members of parliament, leading everyone to wonder if the premier had been disqualified.

The journalists rushed to lawyers and ‘experts’ present at the venue. The judgment was confusing; it was a ‘bad order,’ said Advocate Dr Abdul Basit.

The verdict is clear and the prime minister was disqualified with the announcement of the decision, said Advocate Iftikhar Gilani.

“The best course for the prime minister is to resign,” added Advocate Raja Amir while another said that the ultimate decision lay in the hands of the Election Commission of Pakistan.

Former law minister Babar Awan said that, according to Article 63 of the Constitution, the Speaker National Assembly and chairman Senate can decide whether the premier will be disqualified or not.