Firdou­s Ashiq Awan says verdic­t will be appeal­ed in the court and that a petiti­on will be filed for it.
By Web Desk / Azam Khan / Reuters
Published: April 26, 2012
Tweet Email 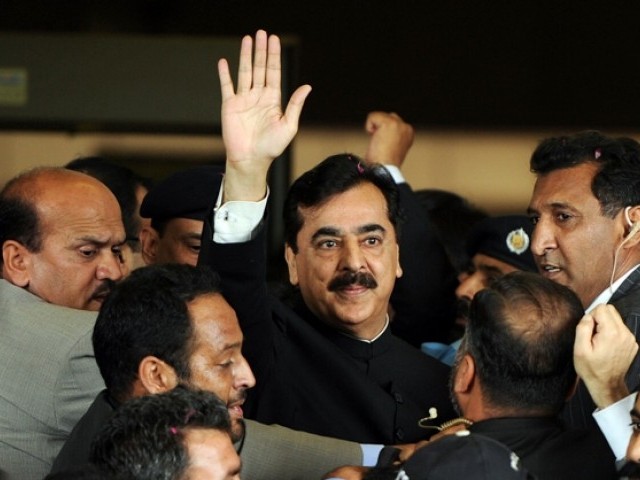 Prime Minister Yousaf Raza Gilani (C) is escorted by security as he waves upon his arrival at the Supreme Court building in Islamabad on April 26, 2012. PHOTO: AFP

ISLAMABAD: The Supreme Court of Pakistan convicted Prime Minister Yousaf Raza Gilani on Thursday during the announcement of a verdict in the contempt proceedings against him and sentenced him till the rising of court, Express News reported.

The bench found Gilani guilty of contempt of court for refusing to reopen corruption cases against the president, but gave him only a symbolic sentence of a few minutes’ detention in the courtroom, while he did not receive any jail term.

“For reasons to be recorded later, the prime minister is found guilty of contempt for wilfully flouting the direction of the Supreme Court,” said Justice Nasirul Mulk.

A seven-member bench, headed by Justice Nasirul Mulk announced the verdict and convicted him for violating Contempt of Court Ordinance 2003 section 5 and the charges framed against him were for willfully disobeying the court’s orders and ridiculing it.

The court cited article 63 (1) (g) of the Constitution and observed that the premier might face consequences under it.

The judicial bench exited the courtroom as soon as the verdict was announced.

The premier was charged with contempt by the apex court in February for refusing to write to the Swiss authorities to ask them to reopen graft cases against President Asif Ali Zardari.

Minister for National Regulation & Services Firdous Ashiq Awan said that a special cabinet meeting will be convened which will be chaired by Gilani and President Zardari will also attend the meeting, who arrived in Islamabad on Wednesday night.

The session will be attended by chief ministers and governors of all provinces except Punjab Chief Minister Shahbaz Sharif.

Awan also said that the verdict will be appealed in the court and that a petition will be filed for it.

“This is a historic day. The court has declared a lawmaker a lawbreaker. This is weakening democracy in Pakistan.”

Earlier, with rose petals being showered at him, Gilani was escorted by the members of cabinet to the Supreme Court.

Gilani was accompanied by his son Abdul Qadir Gilani, Interior Minister Rehman Malik and other members of the cabinet.

The prime minister has appeared twice before in court and has maintained his innocence throughout, saying he had done nothing against the rules of business. Aitzaz, meanwhile, had argued that the bench was not eligible to hear the case as it had taken the notice itself.

During the hearing, two following two orders were announced:

For the reasons to be recorded later, the accused Syed Yousuf Raza Gilani, Prime Minister of Pakistan/Chief Executive of the federation, is found guilty of and convicted for contempt of court, under Article 204 (2) of the Constitution of the Islamic Republic of Pakistan, 1973, read with Section 3 of the Contempt of Court Ordinance (Ordinance 5 of 2003) for wilful flouting, disregard and disobedience of this court’s direction contained in paragraph number 178 of the judgment delivered in the case of Dr Mubashir Hasan versus the Federation of Pakistan (PLD 2010 SC 265). After our satisfaction that the contempt committed by him is substantially detrimental to the administration of justice and tends to bring this court and the judiciary of this country into ridicule.

As regards the sentence to be passed against the convict, we note that the findings and the conviction for contempt of court recorded above are likely to entail some serious consequences in terms of Article 63 (1) (g) of the Constitution which may be treated as mitigating factors towards the sentence to be passed against him. He is, therefore, punished under Article 5 of the contempt of court ordinance (ordinance 5 of 2003) with imprisonment till the rising of the court today.

Former law minister Babar Awan said that according to sub-article 3 to Article 63 of the Constitution, the speaker and chairman of Senate can decide whether the premier will be disqualified or not.

Speaking on the premises of the Supreme Court, he corrected the media reports which were claiming that if the speaker and chairman senate do not take a decision in 30 days, the case will automatically go to the Election Commission of Pakistan, which Awan said was wrong.

He said that the case will only go to ECP if the speaker and chairman senate say that they will not take the decision in this regard.

Correction: An earlier version of this article incorrectly stated that the premier was convicted for violating Article 63 (1) (g) and that he will be disqualified from taking part in elections for five years.