This will be subjec­t to the appeal, which we will file, said lawyer Aitzaz Ahsan.
By Sumera Khan / Agencies / Ema Anis
Published: April 26, 2012
Tweet Email 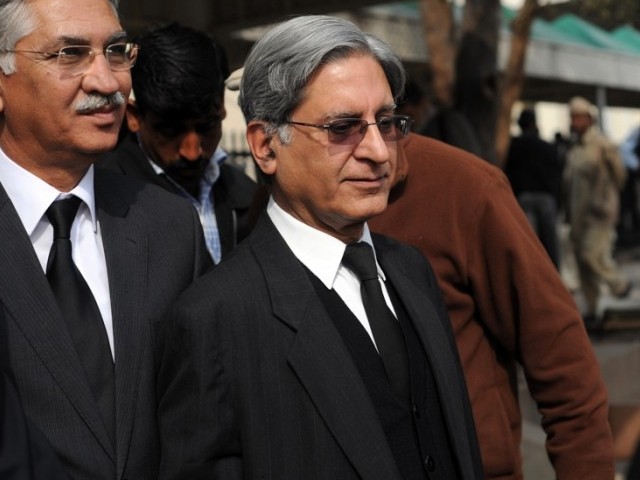 ISLAMABAD: Prime Minister Yousaf Raza Gilani will appeal against a contempt conviction for defying a Supreme Court order to re-open corruption cases against the president, his lawyer said on Thursday.

“This will be subject to the appeal, which we will file,” lawyer Aitzaz Ahsan told a news conference.

Explaining the three types of contempt offences, namely civil, criminal and judicial, Aitzaz told the media that his client was framed for one charge but was punished for the other two. “The charge was of disregarding the court, but the prime minister was sentenced for scandalising the court.”

He added that the court mentioned prime minister’s Bahawalpur address where he allegedly defamed the court, but that happened after the court had indicted him on February 13, 2012. “The clock stopped there… Anything stated by the prime minister thereafter was not relevant to the trial. If the prime minister had impeached any law then a fresh new trial was called for.”

“The implications are that if he is alleged to have scandalised the court – for which he was never charged – he can be disqualified. The prime minister can be disqualified as a member of the National Assembly… But this is not the charge,” he added.

Aitzaz added that the court has no right to read out the decision to the accused as the decision is always handed over in a written form.

He further said that the prime minister is not disqualified till the speaker of the national assembly decides it according to the given procedure within 30 days. “According to the Constitution, there is no automatic and immediate disqualification.”

“Since there is no charge mentioned in the charge sheet against the prime minister, the speaker would have to be convinced by legal experts whether or not a reference could be sent against the premier,” he said.

“Speaker might seek guidance from amicus curies as this is the verdict of the highest court of the country and therefore should be taken seriously,” he added.

Aitzaz expressed his gratitude to the court for awarding minimum punishment to the prime minister and said that even if the premier was handed down imprisonment for six months, he would have accepted the court verdict humbly.

“The prime minister was ready to go to Adiala Jail and he had even brought necessary luggage along with him,” he asserted.

Accompanied by the lawyer, Information Minister Qamar Zaman Kaira said that prime minister is the one who strengthened the parliament.

He said that the Pakistan Peoples Party (PPP) has always paid respect to the judiciary and would continue to do the same.

Gilani was convicted of contempt of court by the Supreme Court of Pakistan but given only a token sentence in a case that could still see him thrown out of office.

The Supreme Court found the prime minister guilty of contempt over his refusal to obey an order to write to the authorities in Switzerland to ask them to re-open corruption cases against President Asif Ali Zardari.

Gilani had faced a maximum sentence of six months in prison, but the court ordered him to be “imprisoned” until the hearing adjourned and he emerged shortly afterwards smiling and waving to supporters.