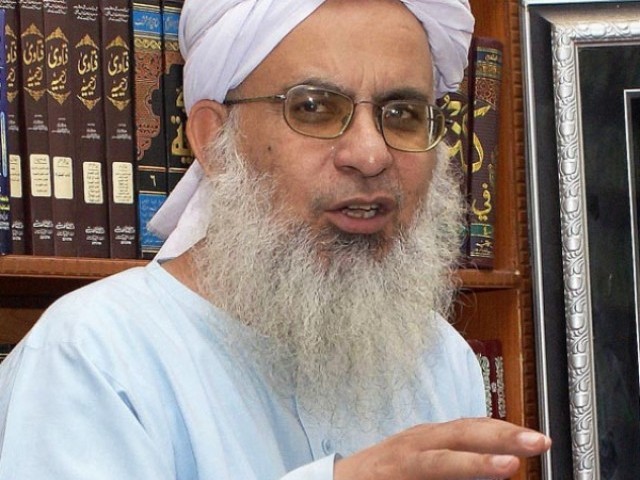 After lengthy speech, the cleric was asked to sit down and let the lawyers argue instead. PHOTO: SANA/FILE

And now he wants enforcement of Shariah law in the country.

After already managing to get pricey land in Sector H-11 for rebuilding the madrassah (a girls’ seminary) that was razed during the 2008 military operation, firebrand Lal Masjid cleric Abdul Aziz shifted attention in the Supreme Court from the mosque’s reconstruction to the enforcement of Sharia law in the country. He called on the chief justice to take suo motu notice of the delay in the enforcement of Islamic laws for which “we rendered great sacrifices”.

A three-judge bench of the Supreme Court headed by Chief Justice (CJ) Iftikhar Muhammad Chaudhry on Tuesday sought reply from the government on a suo motu case on Lal Masjid and Jamia Hafsa along with a contempt petition filed by Maulana Aziz within seven days.

The court also issued notices to the Capital Development Authority (CDA) chairman, Islamabad chief commissioner and the interior secretary to appear before the bench in person during the next hearing on April 25.

When the court asked Aziz about his grievances, he replied that “the court was not taking suo motu notice to enforce Shariah in the Islamic state”. Although Chief Justice Chaudhry strictly asked him to confine himself to his grievance, Aziz continued his speech in court. The chief justice then asked him to present his argument, rather than making a speech. Aziz urged the court to take suo motu notice and direct the parliament to pass a bill imposing Shariah law in the country. Justice Khilji Arif Hussain observed that policymaking was not the court’s job, but that of the government.

But an adamant Aziz continued his denouncement of the government, ignoring at least two requests by the seemingly annoyed judges to wind up his Friday sermon-esque speech.

Aziz finally ended his speech by asked the chief justice to take “big” suo motu measures to enforce Shariah in the country, “otherwise Allah will take suo motu action against the system”, while positing that “Pakistan was created in the name of Islam, however we are still the slaves of foreign invaders, we are following the laws of infidels.” At this point the CJ thanked Aziz for his time, asked him to take a seat and to let the lawyers do the talking.

The court was informed that the Lal Masjid (red mosque) administration had been compensated. Recently, 2.5 acres (20 kanals) were allotted to Maulana Aziz for the reconstruction of Jamia Hafsa, parallel to International Islamic University in Sector H-11/4.

During the hearing, Aziz’s counsel Advocate Tariq Asad argued that in its 2007 verdict, the apex court had directed the federal government to pay salaries for the teachers at Jamia Fareedia, but the government did not act on the order. “The CDA is also creating a hindrance in the construction of Jamia Hafsa, against the orders of the Supreme Court,” Asad claimed.

Iftikhar Gilani, the counsel for Wafaqul Madaris, informed the court that despite the court’s orders, the Islamabad police did not initiate action against those who were responsible for the Lal Masjid operation. The court expressed concern when Gilani asked the court to direct the police to register FIRs against then-president and army chief Pervez Musharraf and the army’s 10 Corps commander at the time. The court did not approve of the speculative content of the argument.

Dropping down like flies: Hospital clueless over incident that left 20 unconscious