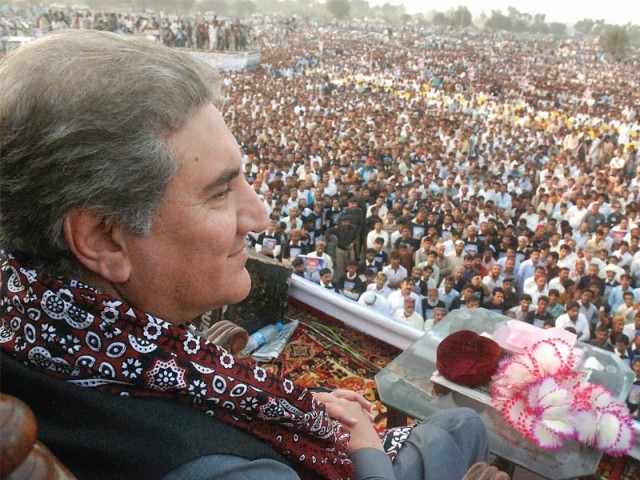 Shah Mahmood Qureshi said that today’s youth look towards Imran Khan because he is looking for new solutions to Pakistan’s problems. PHOTO: AFP

After weeks of sitting on the fence, Shah Mahmood Qureshi formally announced his decision to join Pakistan Tehreek-i-Insaf at a rally in Ghotki on Sunday.

Alongside PTI chairman Imran Khan, the former foreign minister addressed about 40,000 people, using the platform to criticise President Asif Zardari and the government before declaring his allegiance to PTI, becoming the party’s most high-profile defector so far.

Qureshi spoke with fervour for the PTI cause. “I announce I am joining a movement which is struggling to win justice for people,” he said, adding that the “winds of change have now begun.” His formal statement that he was joining the party was greeted with thunderous applause.

The former foreign minister said he had started his journey on January 27, changing path because he refused to “sell Pakistani blood” in the Raymond Davis issue. He said he decided to quit the Pakistan Peoples Party “and think for Pakistan only.” Qureshi fell out with Zardari after, he claims, he withstood pressure to approve diplomatic immunity for Davis, a CIA contractor who killed two Pakistanis in Lahore in January.

Qureshi took full opportunity to take swipes at his former colleagues. “Today I am going to tell you a most important thing, so listen to me very carefully: Pakistan’s nuclear assets are not safe in the presence of President Zardari,” Qureshi said. He also accused the government of indulging in “loot and plunder”.

Qureshi also made religious analogies to his struggle. He said that the day was the first of Muharram and the most important day in the history of Islam, before referencing Imam Hussain’s “sacrifice”.

Imran, who termed Qureshi a “clean candidate”, emphasised the meritocratic structure of his party, ruling out his children taking over PTI one day. “We will hold internal elections in the party right from the union council level to the central body,” he said.

Corruption was high on the PTI leader’s agenda. After coming to power, Imran said, his party would collect huge taxes and carve out new ways of thinking and social justice. Khan also expressed condolences with the families of those killed by Nato forces on Saturday, reiterating his view that Pakistan should pull out of the “American war”.

Imran’s words were high on energy and momentum. “This tsunami which has reached Sindh will reach Karachi on December 25, and then I will teach people how to drop two wickets with one ball.”

Organisers had made arrangements for 15,000 people. However, convoys continued to arrive, leaving all seats taken and thousands of people standing inside and outside the venue. Interestingly, several years ago local bodies and powerful families in Ghotki apparently worked to disrupt Qureshi’s public meetings in the area. Yesterday, however, they supported the rally.

“The president of Pakistan is a symbol of the federation and passing unparliamentary remarks … is inappropriate,” she said, adding that Sindhis would not support those who were opportunist and disloyal.

Memon on verge of  joining PTI

Former MNA Marvi Memon was also present at the public meeting, though she did not address the crowd. A source told The Express Tribune that Memon will announce that she is joining PTI “in next couple of days”.

“She made up her mind in a meeting with Imran Khan in Ghotki,” the source added. Imran is likely to offer a “key slot” in his party to the former member of Pakistan Muslim League-Q.

Memon is keen to work with Imran, according to the party insider. “The PTI team is super and very energetic,” she quoted Memon as saying.

Marvi resigned from the PML-Q earlier this year, protesting against the party’s policies.

(With additional reporting by Zahid Gishkori in Islamabad, AFP and APP)