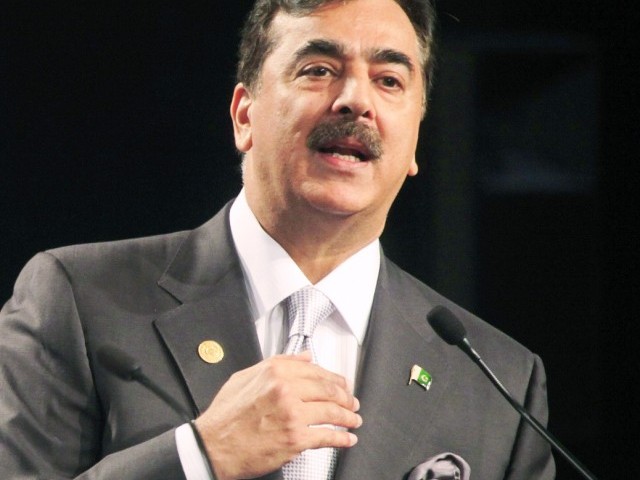 Gilani tells parliamentarians in NA session that Haqqani will provide an explanation of scandal PHOTO: REUTERS/FILE

ISLAMABAD: In the wake of the leaked memo controversy, Prime Minister Yousaf Raza Gilani on Friday told members of the National Assembly that Pakistan’s Ambassador to the US Husain Haqqani has been summoned to Islamabad to provide an explanation to the country’s leadership.

A memo was published online by foreign news papers, which alleged fears of a military coup in Pakistan and the army’s complicity in the Osama bin Laden raid. The memo was allegedly delivered to US Adm Mike Mullen by a Pakistani American businessman Mansoor Ijaz at the behest of Ambassador Haqqani in the week after the Bin Laden raid.

Haqqani, who has served as Pakistan’s representative to the US since 2008, denied that he had either drafted or delivered any memo. Referring to Mansoor Ijaz indirectly, the Ambassador said, “There are many businessmen in this world who claim to have a role in a country’s affairs, but they are not given importance. In Pakistan, however, one man’s claims create a crisis.”

Mullen on Thursday dropped a bombshell when he issued a statement confirming the existence of the document.

Gilani today (Friday) vehemently denied President Asif Ali Zardari’s involvement in the scandal. He added that the Pakistani intelligence and military are held in high regard by the government and they will be protected according to the constitution.

“We should show political maturity regarding this matter. I have already summoned Ambassdor Haqqani here in Pakistan to give an explanation to the leadership of this country,” said Gilani on the Assembly floor amid applause from Pakistan People’s Party parliamentarians.

“Newspapers print many articles against you and me, should we believe everything?” he asked.

He reassured the Assembly that rumours of the country being divided or the dissolution of national intuitions are baseless. Gilani firmly stated that any change that comes will be through the democratic process.

Amid cheers from his party, Prime Minister Gilani tried to appease parliamentarians during the Assembly session by saying that the government will resolve the issue regarding the memo scandal just as it has tackled others.

“Ghum-e-ishq gar na ho ga, toh gham-e rozgar ho ga,” (If it is not heartbreak that will bring you down, it will be unemployment woes) he said, adding that the government is repeatedly facing crises and is “mentally prepared” to tackle any issue, as it is used to facing such issues “every morning”.

“When we wake up in the morning, we ask ‘what will be the issue today?’” he remarked.

“We will remove the thorns from your way; your relationship with America will move forward in an honourable manner,” he asserted, requesting patience and adding that politicians should not indulge in a balme-game.

“Panic has been created because of one newspaper article,” he said. “We have already taken action. What else do you suggest we do?” he asked.

The prime minister ended his speech with the concluding remarks that parties should work together to resolve all issues, including this one.

The Senate has submitted a requisition to address the issue of Ambassador Hussain Haqqani.

29 senators including Tariq Azeem, Ishaq Dar and Jamal Laghari presented the requisition to the senate secretary.

Haqqani has already offered to resign over the scandal.