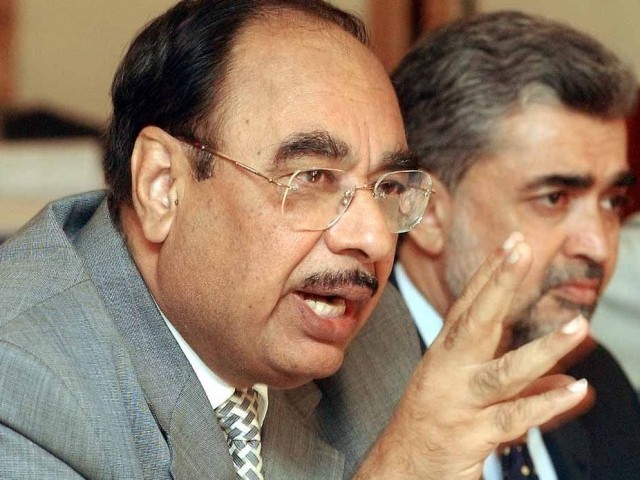 After incamera session of committee, Javed Qazi says US pressurising Pakistan to hide its own failure in Afghanistan. PHOTO: APP/ FILE

ISLAMABAD: The United States is pressurising Pakistan in order to hide its own failures in Afghanistan, said Chairman, Senate Standing Committee on Defence, Javed Ashraf Qazi on Tuesday.

After the in-camera session of the committee, Qazi said that US allegations would only aid the terrorists. The Defence Secretary and the senior officials of the Foreign Office and Inter Services Intelligence agency (ISI) also participated in the meeting.

The United States had alleged that Pakistan supported the militant organization known as the Haqqani network to carry out attacks on the US Embassy and NATO headquarters in Kabul on September 13.

It also claimed that the ISI will use the militant network to start a proxy war in Afghanistan against the US.

[Read: US makes ‘all’ Pakistan assistance subject to action against Haqqani Network]

Qazi added that the US officials often lie for their own interests and criticised the US media for siding with its government in the propaganda against Pakistan. Other participants of the meeting also strongly condemned the allegations against Pakistan and termed them baseless.

The chairman further urged the nation to unite and support the politicians of the country.

The allegations by the US brought a new rift in the US-Pakistan relationship that were already strained after the US incursion in Abbottabad on May 2 that led to the death of al Qaeda leader Osama bin Laden.

After facing strong accusations by the US, top officials in Pakistan had meetings with the US officials on several occasions to discuss the Haqqani Network and its presence in Pakistan.

Pakistan’s Foreign Minister Hina Rabbani Khar also met with the US Secretary of State Hillary Clinton in New York prior to the United Nations General Assembly session to discuss the same issue. Meanwhile, the US has been emphasizing on the need for Pakistan to tackle with the Haqqani network.