Army chief says Mullen is well aware of ‘which countr­ies had ties with the Haqqan­i networ­k’.
By Kamran Yousaf
Published: September 24, 2011
Tweet Email 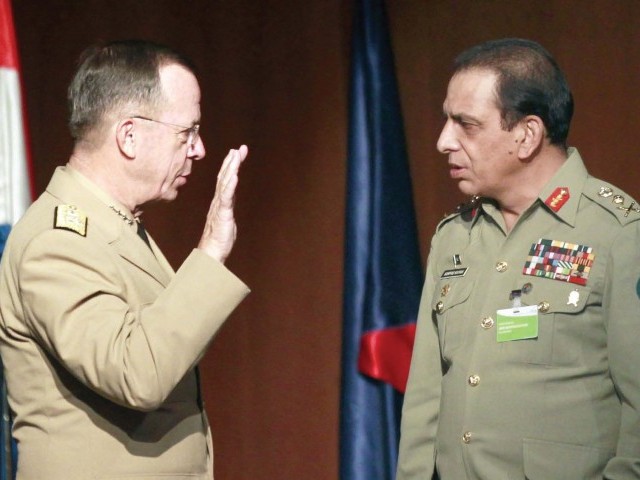 Army Chief General Ashfaq Kayani listens to US Admiral Mike Mullen at the start of the NATO MC conference in Seville on September 16. PHOTO: FILE REUTERS

ISLAMABAD: The crescendo of discontent emanating from Washington has not been taken lightly by Pakistan.

The country’s top civil and military leadership spoke in unison on Friday, urging the United States to stop publicly accusing Islamabad of playing a double game in the war against militancy – and even going as far as warning Washington that it could suffer consequences if it continued to do so.

“You will lose an ally,” Foreign Minister Hina Rabbani Khar told a news channel in New York in remarks broadcast on Friday – a day that also saw the White House calling for Pakistan to cut ties with the Haqqani network.

“You cannot afford to alienate Pakistan, you cannot afford to alienate the Pakistani people. If you are choosing to do so, and if they are choosing to do so, it will be at their own cost,” Khar added. Pressed to break his silence on Friday, Army chief General Ashfaq Parvez Kayani also dismissed allegations that the ISI had helped Afghan militants attack the US embassy in Kabul, insisting that the charges were baseless and part of a “public blame game” – which was detrimental to peace in Afghanistan.

In a hard-hitting statement before a Senate panel on Thursday, US Chairman Joint Chiefs of Staff Admiral Mike Mullen openly accused Inter-Services Intelligence agency of supporting Haqqani insurgents in planning and executing a 22-hour assault on the US Embassy in Afghanistan last week and a truck bomb that wounded 77 American soldiers days earlier.

In a statement issued by the Inter Services Public Relations (ISPR), Kayani termed US Chairman Joint Chiefs of Staff Admiral Mike Mullen’s claims ‘very unfortunate and not based on facts.’

Responding to scathing criticism by the US military’s top officer, Kayani denied allegations that his country is “exporting” terror to neighbouring Afghanistan.

“While taking note of the recent statements made by Admiral Mullen… Chief of Army Staff General Ashfaq Parvez Kayani termed these as very unfortunate and not based on facts,” read an Inter Services Public Relations (ISPR).

“This is especially disturbing in view of a rather constructive meeting with Admiral Mullen,” it added referring to a recent meeting between the pair in Spain.

Interestingly, General Kayani’s terse statement suggested Islamabad had no immediate intention of acting on renewed American demands that it attack the Haqqani militant faction in North Waziristan. Nor did the Army go as far as to deny it maintains contact with the feared Afghan insurgent group. However the Army chief felt ‘singling out’ Pakistan for contact with the group wasn’t ‘fair or productive’.

“On the specific question of contacts with Haqqanis, the (chief of army staff) said that Admiral Mullen knows fully well which all countries are in contact with the Haqqanis. Singling out Pakistan is neither fair nor productive.”

The statement left the media buzzing about the name of the country the army chief was hinting at, but there was no confirmation. However, a military official said the army chief was referring to US attempts to reach out to the Haqqanis for reconciliation in Afghanistan.

Categorically denying the accusations of waging a proxy war and ISI support to Haqqanis, the army chief said: “the blame game in public statements should give way to a constructive and meaningful engagement for a stable and peaceful Afghanistan, an objective to which Pakistan is fully committed.”

Meanwhile, White House spokesman Jay Carney on Friday called on Pakistan to “break any link they have” with the Haqqani terror network.

“It is critical that the government of Pakistan break any links they have and take strong and immediate action against this network so that they are no longer a threat to the United States or to the people of Pakistan, because this network is a threat to both,” Carney said.

In fresh attacks made by Captain John Kirby, spokesperson of Admiral Mike Mullen, the US official claimed the ISI not only supported but also encouraged terrorist outfits, particularly the Haqqani militant network.

“All I can tell you that we are confident that the ISI continues to support and even encourage the Haqqanis to launch these attacks. I am not going into specifics of the intelligence that we have about the support,” Kirby told Pentagon reporters during an off-camera interaction.

When asked about the denial being issued by the Pakistani leadership on the allegations, Kirby said that he and the Chairman stand by those comments.

“The chairman stands by what he testified before the US Senate,” he said.

Military sources say despite US pressure, there is no possibility of an imminent operation in North Waziristan Agency.

“Pakistan must avoid opening another front merely on the behest of the US,” said Defense Analyst Lt General Abdul Qayum. “Any operation in North Waziristan will have huge implications for Pakistan,” he argued.

However, the issue of the Haqqani network has seemingly become the main stumbling block to normalise ties between the two countries. Earlier this week, the US Senate Committee linked all US economic and security assistance to Pakistan with its progress towards fighting militant groups, including the Haqqani network.

However, despite the heightened acrimony, the Pentagon said on Friday that communication lines with Pakistan’s military remain open. Despite serious disagreement, the US military had no intention of cutting off dialogue with Pakistan, press secretary George Little told reporters.

“The lines of communication with our Pakistani counterparts remain open,” Little said. “This is a relationship that’s complicated but essential.”

School Uniforms: ‘Store them for one month’