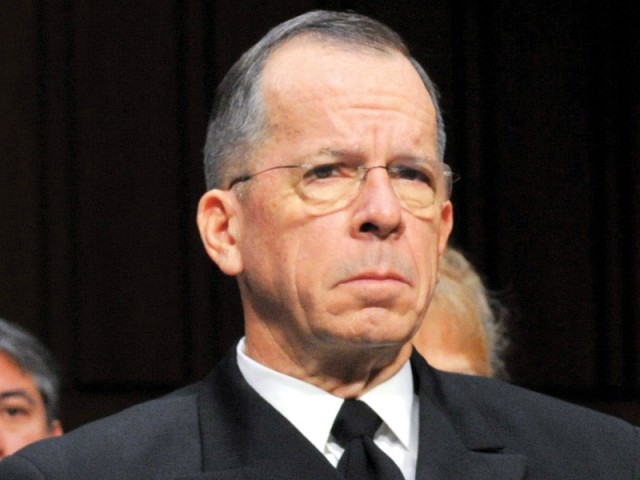 " By exporting violence, [Pakistan has] eroded their internal security," Chairman of the US Joint Chiefs of Staff Mike Mullen.

The accusations have grown more blunt, the attacks more personal, and the reactions more punitive.

The top US military officer called the Haqqani network a “veritable arm” of Pakistan’s intelligence service on Thursday, and accused Pakistan of “exporting” violent extremism to Afghanistan.

“The Haqqani network … acts as a veritable arm of Pakistan’s Inter-Services Intelligence Agency,” Admiral Mike Mullen, who steps down this month as chairman of the US Joint Chiefs of Staff, said to a US Senate panel.

“With ISI support, Haqqani operatives planned and conducted (a September 11) truck bomb attack, as well as the assault on our embassy,” Mullen said.

“We also have credible intelligence that they were behind the June 28 attack against the Inter-Continental Hotel in Kabul and a host of other smaller but effective operations.”

“In choosing to use violent extremism as an instrument of policy, the government of Pakistan – and most especially the Pakistani Army and the ISI – jeopardises not only the prospect of our strategic partnership, but also Pakistan’s opportunity to be a respected nation with legitimate regional influence,” Mullen said.

“By exporting violence, they have eroded their internal security and their position in the region. They have undermined their international credibility and threatened their economic well-being,” Mullen said.

Meanwhile, in a startling accusation on Thursday, the Guardian reported that the American Nato commander in Afghanistan personally asked Pakistan’s army chief to halt an insurgent truck bomb headed for his troops, two days before a huge explosion that wounded 77 US soldiers at a base near Kabul.

On September 8, General John Allen raised intelligence reports of the impending truck bomb during a meeting with General Ashfaq Parvez Kayani in Islamabad, the Guardian reported.

The report added that Kayani promised Allen he would “make a phone call” to try to stop the attack.

“The offer raised eyebrows,” the paper quoted an official with close knowledge of the meeting.

Two days later, an explosives-rigged truck ploughed into the gates of the US base in Wardak, 50 miles southwest of Kabul, injuring 77 US soldiers and killing two Afghan civilians.

The Guardian quoted Pakistani military spokesman, General Athar Abbas, as saying: “Let’s suppose it was the case. The main question is how did this truck travel to Wardak and explode without being checked by Nato? This is just a blame game.”

Almost on cue, the US Senate Appropriations Committee passed a bill, linking US assistance to Pakistan to co-operation in acting against the Haqqani network, al Qaeda and other terrorist organisations.

The committee voted 28-2 to pass the Department of State, Foreign Operations and Related Programs Appropriations bill for the fiscal year 2012.

According to a statement issued by the committee, the bill provides for $161.4 million for State Department operations for Pakistan, but “does not specify amounts for assistance for Pakistan.”

The committee also voted to provide $1 billion for the Pakistan Counterinsurgency Capability Fund, $100 million less than what President Obama had requested.

(Read: US makes ‘all’ Pakistan assistance subject to action against Haqqani Network)

Additionally, says the committee’s press release, “the bill includes strengthened restrictions on assistance for Pakistan by conditioning all funds to the Government of Pakistan on cooperation against the Haqqani network, al Qaeda, and other terrorist organizations, with a waiver, and funding based on achieving benchmarks.”

(WITH INPUT BY HUMA IMTIAZ IN NEW YORK AND WIRE AGENCIES)