Chief of Army Staff (COAS) General Qamar Javed on Thursday reached flood-affected areas of Rojhan of district Rajinpur in Punjab and met flood victims at a relief camp, the military said in a statement.

According to the Inter-Services Public Relations (ISPR), the army chief assured flood affectees that the Pakistan Army will help them to overcome their problems in these difficult times.

The COAS directed ground troops to take this responsibility as a noble cause and spare no effort to lessen the burden of flood-affected brothers and sisters, it added.

Later, General Bajwa also flood-hit areas of Dera Ismail Khan. While interacting with flood victims, The COAS consoled them over their loss and lauded the resilience of local residents in the face of unprecedented natural calamity, the ISPR added.

The army chief also directed Frontier Corps South K-P troops to ensure timely assistance and help the brave people of K-P in this hour of need.

According to the military's media wing, 157 army helicopter sorties evacuated 1,087 stranded people and transported 72 tonnes of relief items to the flood-affected areas. 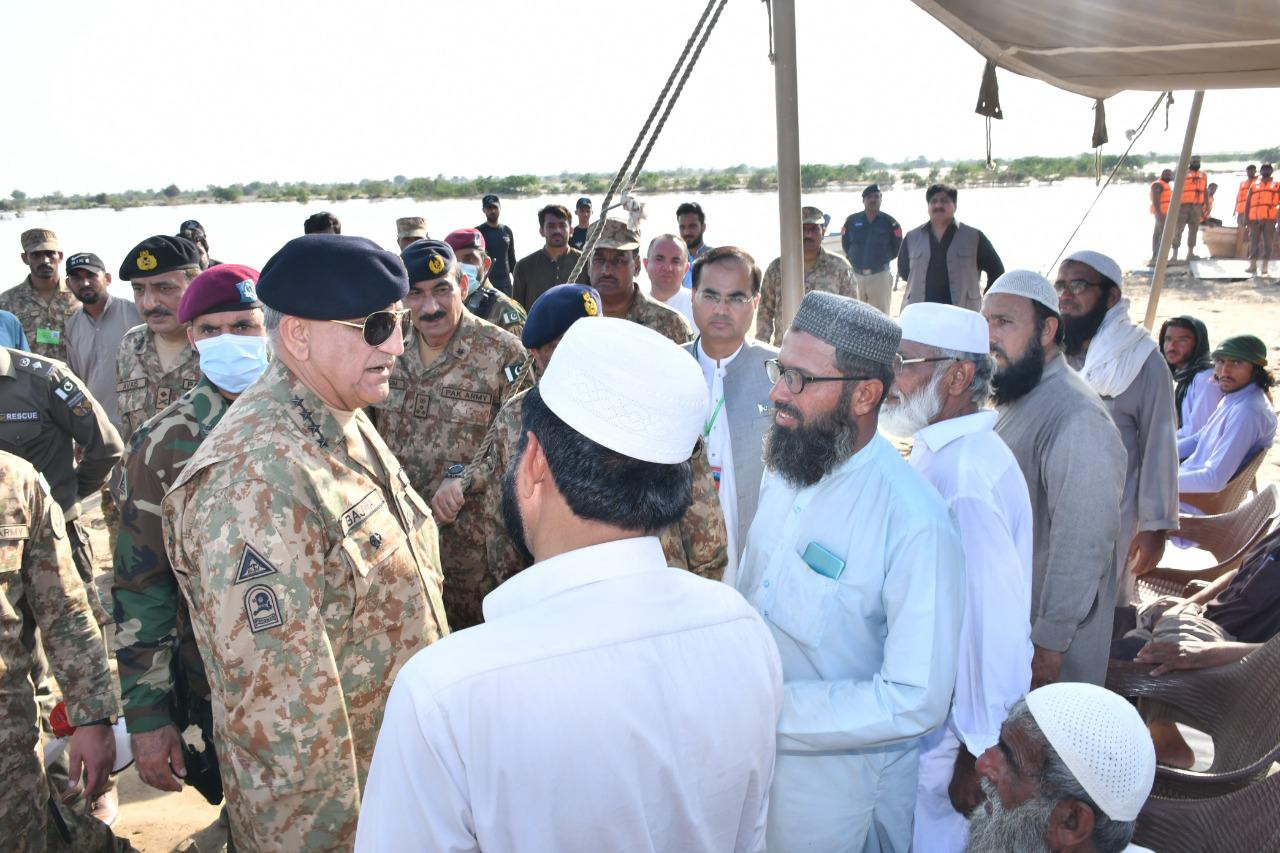 More than 50,000 individuals have been shifted to safer locations from calamity-hit areas and over 51,000 patients were given health assistance in various medical camps and were provided free medicine for 3-5 days, added the ISPR.

The Pakistan Army has also established 221 relief item collection points across the country as part of a donation drive to provide relief to flood affectees.

The army has established 85 collection points in Punjab, 15 in K-P, 43 in Sindh, 41 in Balochistan, another 30 in AJK and three in Gilgit-Baltistan.

A total of 1,231 tonnes of relief items including medicines were collected and are now being dispatched to flood victims.

The army's media wing also stated that 25,000 ready-to-eat meals were also being sent to flood-hit areas.

According to the latest update by the military, 'timely' restoration has been ensured for communication infrastructure including the Karakoram Highway (KKH), which was severed at several points due to floods and landslides, and the Jaglot-Skardu Road by the National Highway Authority and the Frontier Works Organisation

The ISPR also added that additional engineer and medical detachments and resources were moved to Karachi to aid in rescue and relief operations in Sindh.

The Pakistan Army has established a flood control helpline and has advised people to reach out on these emergency numbers for assistance: 1125 for K-P and 1135 for the rest of Pakistan.

Torrential rains and flooding have submerged a third of Pakistan and killed more than 1,100 people, including 380 children as the United Nations appealed for aid on Tuesday for what it described as an "unprecedented climate catastrophe."

Torrential rain has also triggered flash floods that have crashed down from northern mountains, destroying buildings and bridges, and washing away roads and standing and stored crops.

COAS vows to spare no efforts in helping flood-hit people

‘COAS appointment should be on merit’