US proud of long-standing partnership with Pakistan: American envoy

Launch was attended by around 200 distinguished guests including Malala Yousafzai

The OPP would be offering up to three scholarships, with the first set of OPP graduate scholars commencing study at LMH in October 2022. PHOTO: EXPRESS
ISLAMABAD:

Oxford Pakistan Programme (OPP) – a major new platform for academic access and public diplomacy for Pakistani students – was launched at the Lady Margaret Hall (LMH), part of the University of Oxford, where both former prime minister Benazir Bhutto and Nobel Peace Prize winner Malala Yousafzai studied for their undergraduate degrees.

The Oxford Pakistan Programme, the statement said, is the first initiative of its kind through which a concerted effort is being made to address the underrepresentation of Pakistani and British Pakistani students at Oxford; to raise the academic profile of Pakistan, and to promote academic exchange between Oxford University and Pakistan. It is led by Oxford academics and alumni, including Professor Adeel Malik, Dr Talha J. Pirzada, Haroon Zaman, and Minahil Saqib. 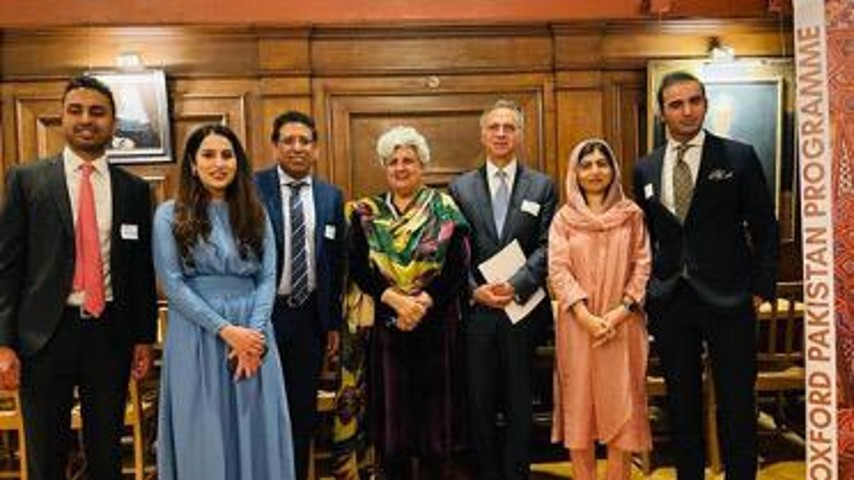 Co-founder of OPP Dr Adeel Malik highlighted the need to broaden academic conversations on Pakistan beyond the traditional emphasis on security.

He explained how Pakistan can act as a useful laboratory for some of the central questions of social science ranging from climate change, social justice to tax reform.

Dr Malik launched the Allama Muhammad Iqbal lecture series, named after poet, philosopher and lawyer Allama Muhammad Iqbal. Supported by the Dadabhoy Foundation, the inaugural Iqbal lecture was held on Thursday, May 19, 2022, at which Professor Wael B. Hallaq of Columbia University spoke on the topic of “The Ethics of Empire and Wealth: Ibn Khaldun and the Modern State”. The lecture was livestreamed to 20 universities across Pakistan.

Co-founder of OPP Dr Talha J. Pirzada revealed that the initiative has secured commitments of around £1 million over the next five years to fund various initiatives as part of the OPP, including a scholarship programme for graduate students at Oxford of Pakistani origin.

He explained that over 20 students from Pakistan each year are unable to take up graduate offers to study at Oxford due to a lack of funding, despite over 60 per cent of Pakistan’s population of 220 million people being under the age of 30.

The OPP would be offering up to three scholarships, with the first set of OPP graduate scholars commencing study at LMH in October 2022, allowing these students to take advantage of Oxford’s world class academic facilities.

Haroon Zaman, another OPP co-founder, highlighted how British Pakistanis are the most underrepresented group at Oxford University, despite being the UK’s second largest ethnic minority community.

He also launched the OPP’s access programme, a pioneering initiative that will facilitate school visits by Oxford students and recent alumni, to speak with prospective Oxbridge applicants in schools in the UK located in areas with high numbers of British Pakistani students, as well as virtual engagements with schools in Pakistan.

Minahil Saqib, the OPP’s Outreach Lead, launched the OPP’s internship programme through which the OPP will partner with venture for Pakistan to provide internship opportunities for graduates from Oxford and Pakistani universities. The programme would allow participants to experience Pakistan’s booming start-up ecosystem.

On this occasion, the Country Director for Pakistan at the World Bank Dr Najy Benhassine announced a new internship programme with OPP that will enable four students from Oxford University and four from a public sector university in Pakistan to intern at the World Bank Office in Islamabad every year.

Malala Yousafzai, the youngest person ever to be awarded a Nobel Prize, announced the establishment of a graduate scholarship for Pakistani women at Oxford as part of the OPP and wished that the OPP becomes a long-lasting project at the University.

Minister of Foreign Affairs Bilawal Bhutto Zardari termed the OPP a pioneering effort to advance academic access and engagement. He expressed great personal pride at the OPP being supported by LMH, the college where his beloved mother, Benazir Bhutto, studied.

Syed Babar Ali, founder of LUMS, termed this initiative as a historic effort that has huge transformative potential. Dr Elizabeth Kiss, the Warden of Rhodes House and CEO of the Rhodes Trust, announced the Rhodes Trust’s campaign for a second Rhodes Scholarship for Pakistan, supported by the OPP. A group of Pakistani Rhodes scholars, led by Mohammed Khaishgi, CEO of TRG Global, have already raised $60,000 towards this goal.

Punishing students for no sin of theirs