US nationals sentenced to 15 years imprisonment

US nationals sentenced to 15 years imprisonment 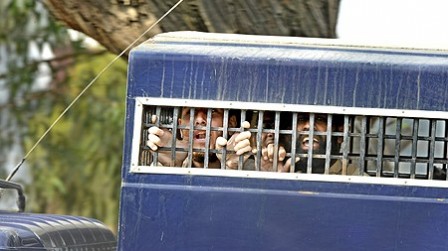 US nationals shout from inside a police prison van as they leave the court. PHOTO: AFP

The Sargodha Anti Terrorism Court on Thursday has sentenced 15 years of imprisonment and Rs70,000 to the five US nationals convicted for acting against the state and having links with militants.

ATC judge Anwar Nazeer announced the verdict during the hearing in Sargodha District Jail. Ten years have been awarded for acting against the state and another five for having links with militants.

If they fail to pay the fine of Rs70,000, another 9 months will be added to their imprisonment.

The Defence counsel said they will appeal against the verdict in the Lahore High Court (LHC).

Strict security arrangements were made outside the district jail while the hearing was taking place.

The five young men from Washington DC were arrested in Pakistan in December after their families reported them missing.

The US nationals – Aman, Ahmad, Waqar, Rami and Umar Farooq – were arrested from Sargodha, allegedly trying to join Taliban in the fight against US troops in Afghanistan.

They denied the accusations, saying they came to Pakistan to attend a wedding and intended to travel to Afghanistan to do humanitarian work.