From 'Friends' reunion to #FreeBritney: What went down in 2021

In a diplomatic achievement for Pakistan, the government of Australia on Wednesday returned a Bronze Age iconic artefact.

The stone was handed over to Pakistan’s High Commissioner to Australia Zahid Hafeez Chaudhri at a ceremony, which was attended by senior officials from the Australian Office of the Arts, Department of Foreign Affairs and Trade, Australian Border Force (ABF), INTERPOL Canberra and the Australian Federal Police.

It is for the first time that an object of cultural heritage from Pakistan was returned by the Australian government under the Unesco convention.

The object was secretly excavated from Balochistan and illegally smuggled out of the country. It was purchased online by an Australian resident from a seller in the US and exported to Australia in July 2020.

The object was stopped for inspection by the ABF and upon examination was found to be Pakistan’s cultural property. 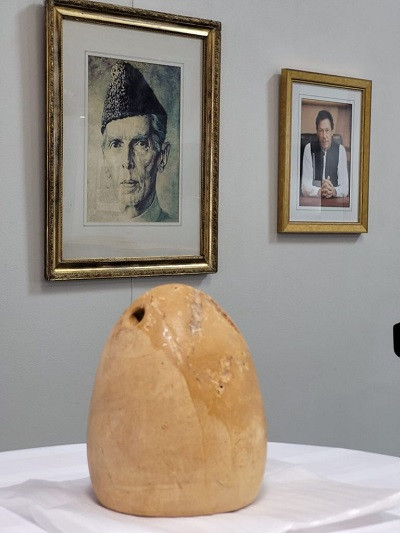 The High Commission for Pakistan had made a restoration request to the Australian Office of the Arts for the return of the object to its rightful owner under the Unesco convention on the Means of Prohibiting the Illicit Import, Export and Transfer of Cultural Property 1970.

Both Pakistan and Australia are signatories to the said convention.

High Commissioner Chaudhri on the occasion appreciated the efforts of the Australian government in intercepting, retrieving and returning to Pakistan this immensely valuable cultural property from the Bronze Age.

He underscored the importance of close cooperation among countries against illicit trafficking in cultural property.

The high commissioner also reiterated Pakistan’s commitment to working with international friends and partners for the protection of common cultural heritage.

Pakistan, India issue diplomatic visas to each other