At least 800 booked under ATA over Sialkot lynching

The police have arrested a prime suspect and booked at least 800 people under the Anti-Terrorism Act a day after a mob tortured a Sri Lankan man, employed as a manager in a factory on Wazirabad Road, Sialkot, to death and set his body on fire.

The police said Farhan Idrees, the key suspect, has been detained.

They said hundreds of people armed with sticks and batons were present inside the factory at the time of the murder of the foreign national, Priyantha Kumara.

After the murder, the mob dragged his body on the streets, the police said, adding that it failed to stop the crowd due to a lack of strength.

As per the initial investigation, the police said that the Sri Lanka citizen was killed over allegations of blasphemy. They added that they were investigating the matter from all angles.

Meanwhile, an initial report of the incident has been submitted to Prime Minister Imran Khan by the Punjab Police. As per the report, at least 112 suspects have been detained who were identified with the help of the factory managers. The provocateurs have been arrested as well. 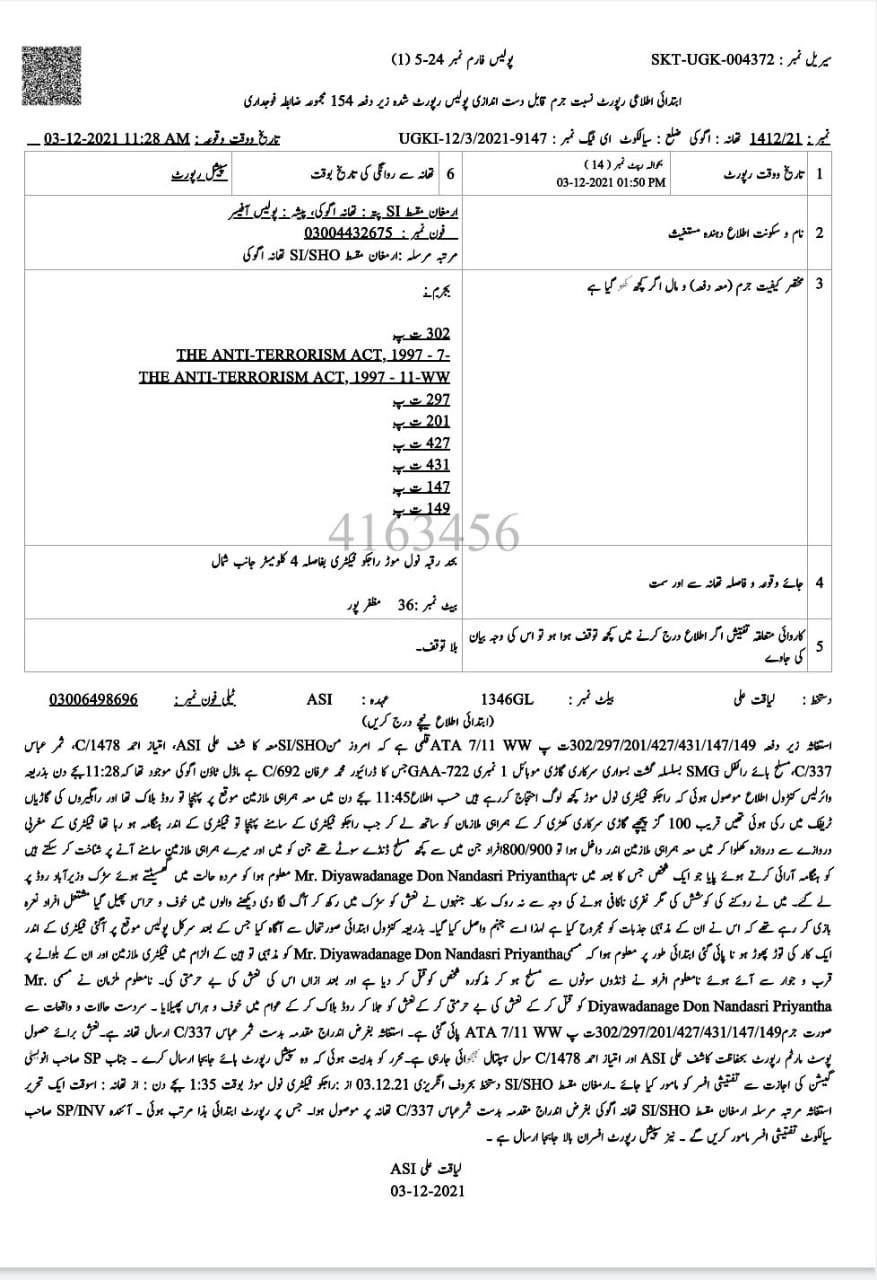 A copy of the FIR available with The Express Tribune.

The detained suspects have been moved to unknown locations, they said, adding that investigation was still underway.

Separately, the body of the deceased has been handed over to the police after post-mortem for legal formalities.

In a statement, cleric Mufti Taqi Usmani condemned the killing of the foreign national over blasphemy allegations. He said blasphemy was a “grave crime” but the evidence to prove the blasphemy charges must be beyond doubt.

The Sialkot incident has tarnished the image of Pakistan and Muslims across the world, he added.

He expressed concerns over the violent state of affairs in Pakistan, saying instead of using force, the government should table the matter before parliament to resolve such issues. He also urged the protesters to use peaceful means instead of destroying national properties and violence.

The nation was shell-shocked and disgusted on Friday when a Sri Lankan national was brutally lynched and his body was set on fire by a mob in Sialkot. The sickening incident outraged the nation as the civil and military leaders denounced it as “horrific” “shameful” and “extra-judicial vigilantism”.

President Arif Alvi said the vigilante attack has nothing to do with religion, while Prime Minister Imran Khan promised that those responsible “will be punished with the full severity of the law”.

Several gruesome video clips shared on social media showed a mob beating the victim while chanting slogans against blasphemy. Other clips showed his body set ablaze, as well as the overturned wreckage of what was said to be his car.

Many in the mob made no attempt to hide their identity and some took selfies in front of the burning corpse. The police claimed that the grisly incident took place inside the factory premises and there was no way of knowing about it before that time.