No respite in the rupee fall

Pakistan’s current account deficit - higher foreign expenditures compared to income - remained at a higher level at $3.4 billion in the first quarter (July-September) of current fiscal year in the wake of a spike in imports coupled with higher international commodity prices.

According to the State Bank of Pakistan (SBP), the country had recorded a current account surplus of $865 million in the corresponding quarter of previous year.

A strong rebound in economic activity and higher international commodity prices kept the current account deficit at a high level of $3.4 billion in Q1FY22, the SBP stated in a tweet.

Speaking to The Express Tribune, Arif Habib Limited Head of Research Tahir Abbas said that the current account deficit widened on the back of soaring imports, which increased 64% year-on-year during the July-September quarter.

“Good news is that exports also registered a surge of 35.2% during the period while remittances stood strong at $8 billion,” the research head pointed out.

Echoing his views, Arif Habib Corporation Managing Director and CEO Ahsan Mehanti added that the primary reason behind expansion in the current account deficit was the lofty import bill. 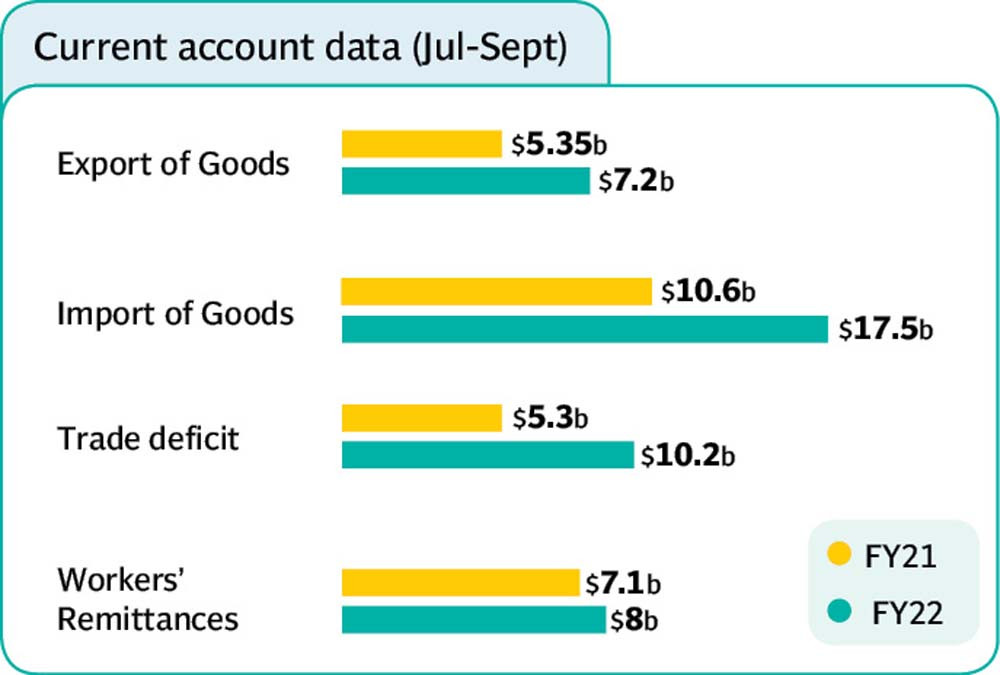 “During the July-September quarter, oil prices rose from $60 to $85 per barrel, which inflated the import bill,” he said. “Moreover, higher non-energy imports coupled with the uptrend in global commodity prices further widened the bill.”

Freight cost also jumped on the back of recovery in global demand as more and more countries were lifting Covid-19 restrictions.

Read Current account remains in deficit despite jump in exports

Although exports registered an increase, the surge in international prices of energy products (coal and oil) offset the impact, he underlined.

A report of Arif Habib Limited stated that higher demand for machinery led to a jump in the overall import of goods during the quarter ended September 2021.

“Textile exports increased 27% to $4.4 billion during July-September 2021,” it said. “In the same period, technology exports amounted to $635 million, contributing 40% to the overall services’ exports and recording a 43% jump.”

Pak-Kuwait Investment Company Head of Research Samiullah Tariq highlighted that the expansion in the current account deficit came on the back of supply shortages and rising global commodity prices.

The central bank stated that the current account deficit narrowed to $1.11 billion in September 2021 against $1.47 billion in August 2021.

Arif Habib Limited’s report pointed out that the current account deficit dropped 24% month-on-month in September 2021, driven by a 10% surge in exports and 2% contraction in imports.

Topline Securities Director Research Atif Zafar noted that exports of goods touched an all-time high of $2.64 billion in September, up 13%. He projected that the current account deficit would stay in the range of $10-11 billion (3-3.5% of GDP) in FY22.

Abbas was of the view that the ongoing wave of rupee depreciation against the US dollar would discourage imports in the coming months. “Measures taken by the State Bank and the government to reduce the import bill are bearing fruit,” he said.

Last month, the SBP imposed 100% cash margin on the import of 114 items to discourage imports of these goods and support the balance of payments.

With this, the total number of items subject to the cash margin rose to 525.

“When commodity prices stabilise in the international market, Pakistan’s import bill will contract, which will in turn reduce the current account deficit,” said Tariq.

Owing to the steps taken by the authorities to curtail imports, the current account deficit is expected to stay within a range of 2.5-3%, as targeted by the government.