Ali Geelani laid to rest in Srinagar amid curfew

Veteran Kashmiri leader Syed Ali Geelani was laid to rest after a tightly controlled pre-dawn funeral on Thursday as the Indian authorities imposed a lockdown across in Indian Illegally-occupied Jammu and Kashmir (IIOJK).

The uncompromising campaigner against the Indian occupation of Kashmir, died late on Wednesday at the age of 92, following a long illness while under house arrest by the Indian forces. His family members wanted his burial at the Martyrs’ Graveyard, but the Indian forces did not allow it.

Wary of Geelani’s influence across the Kashmir Valley, the occupation forces were quickly deployed, mobile internet and phones were cut and residents were told to stay in their homes. The Indian forces also snatched the body from the family, who were not allowed to even attend the burial at 4:30 am.

Late Geelani was laid to rest at a mosque in Haiderpora, near his home in Srinagar, where paramilitaries and troops manned barricades throughout the day and the curfew was expected to be extended until after traditional family mourning ceremonies on Sunday. 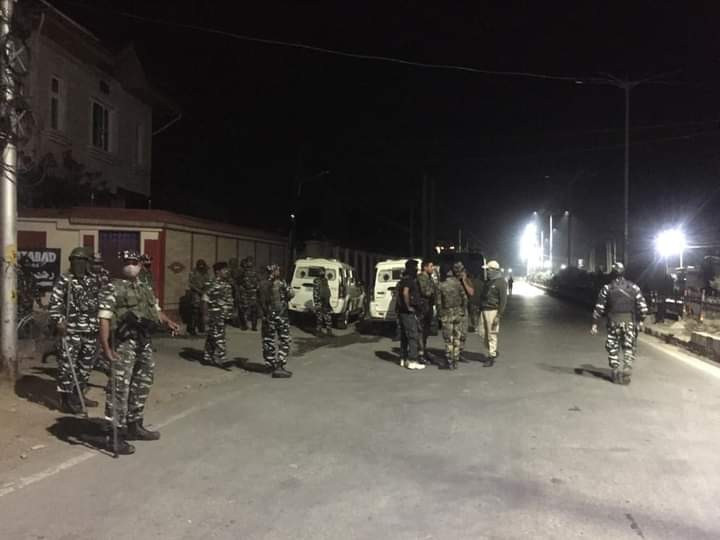 Geelani, who had spent much of the last five decades in jail or under house arrest, had wanted to be buried at the Martyrs Cemetery in Srinagar along with other Kashmiri leaders. But authorities rejected the request, the police source said.

“At about 3:00 am, police barged inside our home and took our father’s body,” one of his sons, Naseem Geelani, told AFP. Police “snatched my father’s body and did not allow anyone from our family to participate in the burial,” the son added.

“We insisted that we would perform his funeral after morning prayers and bury him according to his wish at the Martyrs Cemetery. We heard later that police undertook washing rituals for my father’s body and had him buried.”

The police acknowledged that security forces “took control of the arrangements”. A police official told AFP that Geelani’s two sons were present but he did not name them. About 50 people attended the funeral, according to one man who said he was a neighbour of Geelani.

Geelani had been a thorn in India’s side since the early 1960s when he began campaigning for the territory’s ascension to Pakistan. He was jailed for nearly 10 years after 1962 and after that was often restricted to his home.

Since his youth, Geelani had been a member of Jamaat-e-Islami that was banned by India’s Hindu nationalist government in 2019. He rejected any direct talks with the New Delhi government until it “accepts Kashmir as a disputed territory”.

The late Geelani was equally respected by friends and foes. “We may not have agreed on most things but I respect him for his steadfastness and standing by his beliefs,” said Mehbooba Mufti, a former IIOJK chief minister.

In Pakistan, Prime Minister Imran Khan was among the first to pay tribute to Geelani. Imran said Geelani had “struggled all his life for his people and their right to self-determination. He suffered incarceration and torture by the occupying Indian state but remained resolute.”

Read: Geelani passes away in IIOJK

On the demise of Geelani, the government had declared a day of national mourning on Thursday, while the All Parties Hurriyat Conference (APHC) appealed to the people of Kashmir to come out of their homes and hold large protest against the cruelty of the Indian government.

The APHC has asked the Kashmiri and Pakistani diaspora to hold funerals in absentia. A funeral prayer in absentia was offered at the lawn of Parliament House in Islamabad, which was attended by President Dr Arif Alvi, Senate Chairman Sadiq Sanjrani, Azad Kashmir Prime Minister Qayyum Khan Niazi, and others.

Responding to a question about the snatching of late Geelani’s mortal remains by Indian forces, the president said India had not done this merely to Ali Geelani rather all minorities there were facing similar humiliating treatment.

The Foreign Office also issued a strong-worded statement, condemning the “barbaric act” of snatching of the mortal remains of Syed Geelani” from his family. “The Government of India is so afraid of Syed Geelani and what he stood for that they have now resorted to this inhuman act even after his passing.”

The Foreign Office spokesperson said that this showed “the degree of callousness on part of the Occupation Forces and demonstrated beyond doubt that India would trample all civil and human values” in perpetuating its occupation of IIOJK.

The spokesperson urged the international community to take serious note of this unprecedented and egregious situation in the IIOJK and hold India to account for its breaches of international human rights and humanitarian laws.

Geelani passes away in IIOJK

In IIOJK, few now dare to speak out