Attempts are being made to put blame on Pakistan over the mistakes of past 20 years in Afghanistan, says Moeed Yusuf

While reiterating that Pakistan was doing its best to find a peaceful solution to the crisis in Afghanistan, National Security Adviser (NSA) Moeed Yusuf has regretted that many Indian and Afghan social media accounts were involved in maligning Pakistan.

"Attempts are being made to put blame on Pakistan over the mistakes made in the past 20 years in Afghanistan," he said during a press conference in Islamabad, flanked by Federal Information and Broadcasting Minister Fawad Chaudhry.

Moeed said that as the US is completing its withdrawal in Afghanistan, ‘face-saving’ attempts are being made to hide its failure to ensure peace in the war-torn country, adding that many Afghan and Indian social media accounts are involved in promoting this narrative.

The NSA said that the government has decided to expose the nefarious designs against Pakistan and will present its analysis with the help of data.

"We will expose everything with data and tell the world about it. We will present our point of view on national as well as international media," he added.

Moeed said that these social media accounts have a theme under which they try to discredit Pakistan especially the Pakistan Army. “They target China-Pakistan Economic Corridor (CPEC)… they want to build a narrative to keep Pakistan on the [FATF] grey list or black list, and they also highlight the nationalistic point of views against Pakistan.”

The national security adviser said that many trends created against Pakistan on Twitter and other social media platforms are by bots and many in Pakistan retweet them and become part of propaganda unknowingly. "They use videos that are five or 10 years old but because they support their narrative, they use them to their advantage but unfortunately many people fall victim to such propaganda," he added.

On #SanctionPakistan trend, Moeed said Pakistan was under no such threat. "There is no logical reason for it (sanctions)... I just went to the US and I can assure you that nothing like this is going to happen."

He also refuted the claims that Pakistan was supporting the Taliban in Afghanistan, saying that it was physically impossible for Pakistan to reach many areas being contested by the insurgent group. "See the map where they (Taliban) are fighting and winning... it would take more than 10 days for anyone to even reach some of those areas," he explained.

Moeed regretted that even some state media accounts of Afghanistan were involved in blaming Pakistan.

The NSA regretted that the world instead of focusing on trying to put all its efforts behind a political settlement in Afghanistan, a peace deal which is Pakistan's priority, many in positions of responsibility are busy in trying to shift blame, trying to create fake news and disinformation campaign.

"Pakistan will respond every time through analytics and data the reality and not through fake news as others are doing... it is deliberate and it is happening," he added.

He also warned Pakistanis against believing everything they come across on social media. "Please check and verify before you see a trend going in a particular direction. Our security forces our state apparatus... the government is vigilant and we are safe and will remain safe," he added.

He further said that Pakistan will not shy away from pointing whoever is involved in fake news campaigns against the country.

Speaking on the occasion, the information minister said that 150,000 tweets came from India alone on August 14, 2020, with #BalochistanSolidarityDay hashtag.

He said that Pashtun Tahafuz Movement (PTM) created 150 trends against Pakistan and they were supported by India. "A massive social media campaign is underway against Pakistan," he added.

The federal minister said the trend on Baloch human rights activist Karima Baloch, who was found dead in Canada, was tweeted 20,000 times by the PTM.

He said that trend created on Usman Kakar's death was tweeted 10,000 times and two out of three of those tweets were made from India. He added that a trend was created over the "death" of a kid in Balochistan and it was later discovered that the child was fine. "Many tweets were from India and some were even from the US."

The information minister said that an Israeli group created a trend on Zulfi Bukhari's visit to Israel which was, knowingly or unknowingly, even followed by social media wings of JUI-F and PML-N.

He said that when the Tehreek-e-Labbaik Pakistan (TLP) issue was at its peak, over 0.4 million tweets were created by India, adding that recently a trend was created that women were not safe in Pakistan when the Noor Mukaddam case came to light.

India, Afghanistan – a source of sustained disinformation campaign against Pakistan

A sustained disinformation and propaganda campaign by India and Afghanistan to sabotage the Afghan peace process and target Pakistan, has been uncovered, showing the extent of the fifth-generation warfare. 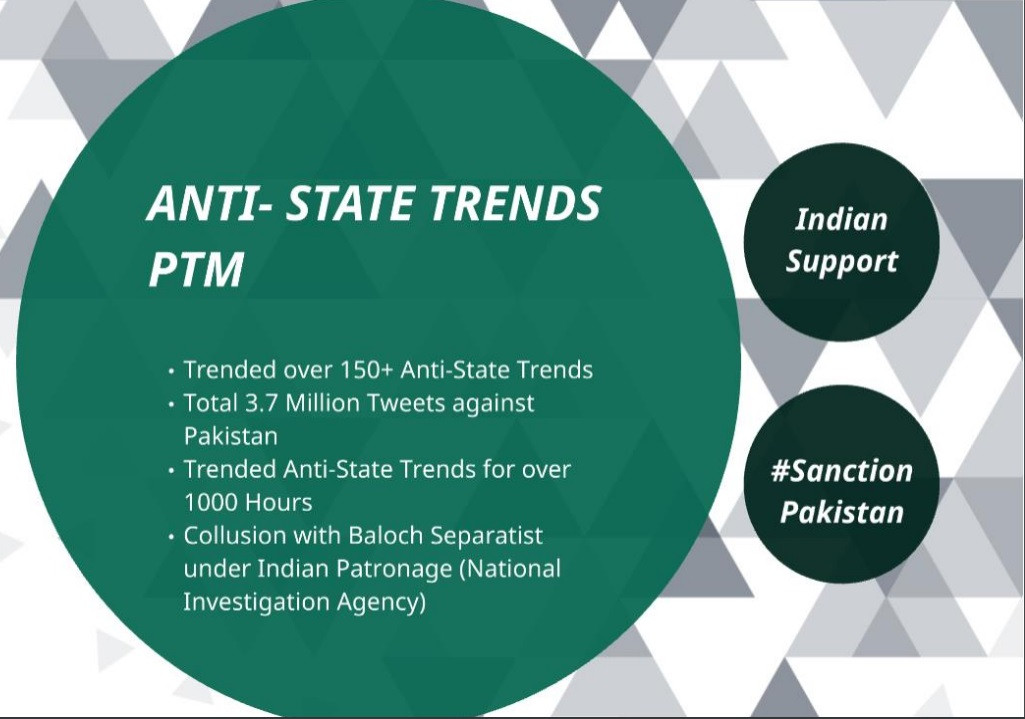 Pakistan has repeatedly pointed how India and several other countries were engaged in the fifth generation warfare (5GW) against it, a fact that came to fore with the shocking disclosures made by the EU Disinfo Lab.

The G5iO pointed that the frequency and intensity of these campaigns increased dramatically over the last three months once, particularly after the announcement of the final withdrawal date of the United States and as the Taliban gained military advances.

We live in a world where online actions have offline consequences. We must stand united against disinfo & fake news that sabotage peace and prosperity around the world. Recent malicious propaganda against Pakistan by spoilers of peace has been detailed in this report by @IPRI_Pak https://t.co/7BAHcB1rTy

The latest hashtag #SanctionPakistan has been used over 730,000 times, according to the data from a social media insight company, Talkwalker. Around 37 per cent of those tweets originated from Afghanistan.

It was noted that artificial activity was generated from accounts engaging in platform manipulation and were recently created to push inorganic content.

Despite efforts by Pakistan to maintain a conciliatory tone, relations with Afghanistan have soured over the past few months. Pakistan’s offer to Afghanistan for a peace conference earlier this month was rejected, while the Afghan diplomats were recalled by President Ashraf Ghani over an alleged abduction attempt of its ambassador’s daughter. Pakistan has refuted and termed it a staged attempt to malign the country.

Information Minister Fawad Chaudhry in a tweet said; ” With 8th province falling to Taliban, People of Afghanistan and people of USA must Question So called leadership of Afghanistan where 2 Trillion USD vanished that they received to build Afghan National Army? How come all ministers and generals became billionaires but People of Afghanistan are suffering due to poverty? Who is responsible for these sufferings? Corruption of Leadership drowns the nations and Afghanistan is an example of that.”

With 8th province falling to Taliban,People of Afghanistan and people of USA must Question So called leadership of Afghanistan where 2 Trillion USD vanished that they received to build Afghan National Army? How come all ministers and generals became billionaires but

Key narratives by Afghanistan and India on the anti-Pakistan campaign were to target and blame Pakistan’s security institutions, fan Baloch, Pashtun separatism, describe Taliban as sponsored by Pakistan, criticise the US government for abandoning the Afghan government. 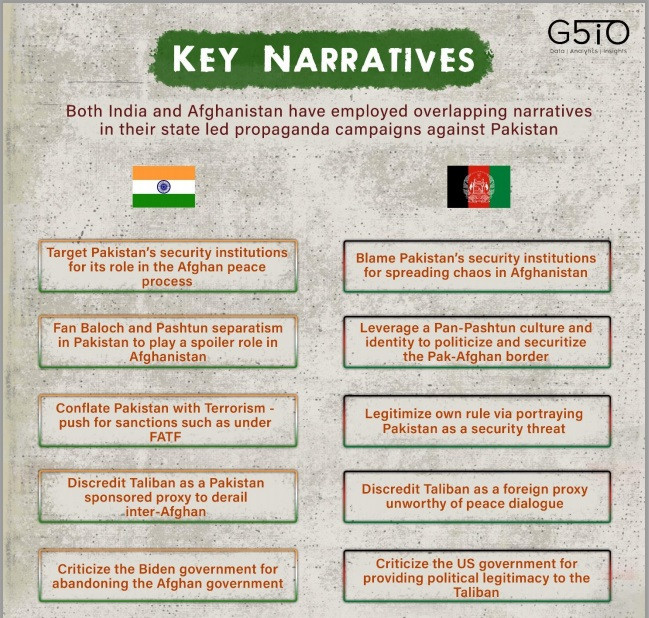 A timeline of social media hashtags centred on state-run disinformation campaigns by both India and Afghanistan showed clearly the intent and the targets. The hashtags included #FreeBalochistan, #14AugustBlackDay, #CivilWarinKarachi, #KarimaBaloch, #HazaraGenocide, #SanctionPakistan. 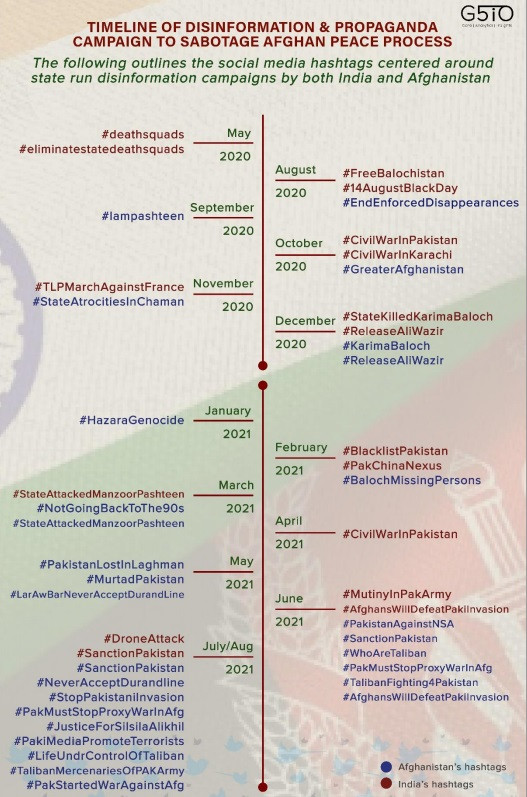 The details of coordinated network activity show that most of these campaigns were built on common narratives being propagated by both India and Afghanistan and comprised of known state-linked accounts. 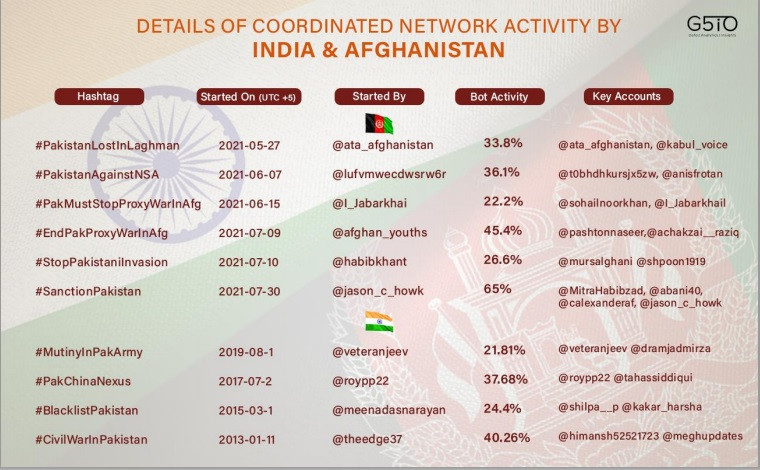 The G5iO points that the hashtag #SanctionPakistan serves as a good example of the analysis mentioned above, as it has been used intermittently since June 2016 by Indian backed propaganda accounts.

However, this was changed in June 2021, when it was pushed mostly by the Afghan backed accounts against Pakistan and tagged key accounts of top US, UN and EU officials for wider dissemination. 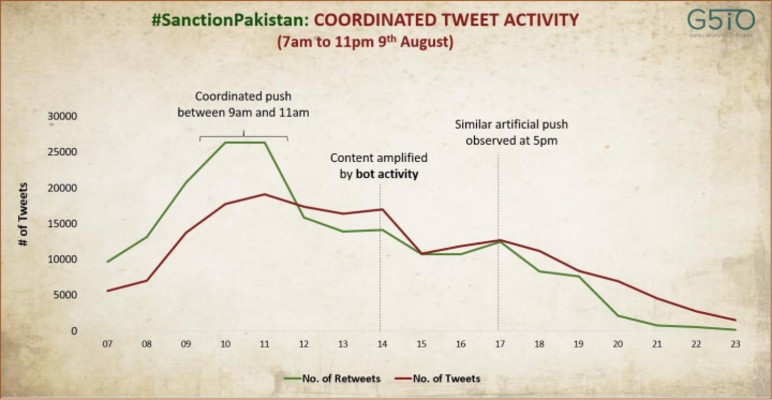 The same hashtag was artificially pushed on August 9 and 10 mostly by Indian and Afghan sponsored accounts to around 500k+ tweets; out of which 65% of the activity was artificially generated. The graph above shows clear spikes in such artificial activity.

Still over half of the content linked to the propaganda campaign is emanating from Afghanistan, the G5iO said.

‘Peaceful Afghanistan will lead to prosperity in region’