Will try to resolve problems of the port city with consensus, says provincial government’s spokesperson

The Sindh government has appointed Barrister Murtaza Wahab Siddiqui, who also holds the portfolios of adviser to Chief Minister on Law and Environment and provincial government's spokesperson, as the administrator of Karachi Metropolitan Corporation (KMC), replacing Laeeq Ahmed.

A notification has also been issued by the Sindh Local Government Department on Thursday. It stated that Laeeq Ahmed has been relieved of his charge with immediate effect.

Sources told The Express Tribune that Wahab will also continue to work as PPP spokesperson and adviser to the chief minister.

Talking to a private TV channel, the newly-appointed administrator said that he will take all stakeholders of the port city on board before making decisions, adding that he will try to resolve issues faced by the people of the financial capital of the country.

He also thanked the party leadership for giving him such a big responsibility.

Sources privy to the development had earlier told The Express Tribune, that the decision to appoint Wahab as administrator was taken on the orders of PPP Chairman Bilawal Bhutto-Zardari who is eyeing to win upcoming local bodies election.

The schedule of the local government polls has yet to be announced, however, the provincial governments in the federating units have started manoeuvring to strengthen their party position in the grass-root level politics.

According to officials, Wahab, who belongs to Karachi city, has been tasked to improve municipal services of the city and accomplish important projects so that the PPP could galvanise its support in upcoming general and local bodies’ polls.

Wahab who happens to be the son of PPP stalwart and former secretary information of the party, Fauzia Wahab (late), has also served as senator from 2017 to 2018. He was elected unopposed as senator from Sindh when the seat fell vacant after the resignation of PPP’s Saeed Ghani.

He later contested the last general election from PS 111, Karachi south mainly from Clifton and DHA areas, but lost the seat to PTI’s Imran Ismail who went on to become the governor of Sindh.

Muttahida Qaumi Movement (Haqiqi) leader Aftaq Ahmed welcomed the decision. “Murtaza Wahab belongs to Karachi. He knows the dynamics of the city. It’s a good decision to appoint him,” he said.

Sindh Information Minister Nasir Hussain Shah while lauding the services of Wahab in Karachi said credit goes to him for initiating major development projects in the metropolis. The PPP recently won the last by-poll of the National Assembly seat from Baldia, he remarked.

The Pakistan Tehreek-e-Insaf (PTI) the major rival of the PPP in Sindh has opposed the decision. “A neutral and apolitical person should be appointed as administrator Karachi.”

Firdous Shamim Naqvi, the PTI senior leader and MPA of Sindh, said Wahab is a most junior person who, according to him, has no idea about municipal issues.

The Convener of Muttahida Qaumi Movement-Pakistan (MQM-P) Dr Khalid Maqbool Siddiqui has said that they do not expect any development in Karachi if Pakistan Peoples Party’s Sindh government appointed Wahab as administrator of KMC. “Wahab’s appointment can bring a change in Dubai’s real estate.”

He acknowledged that the government of PTI had earmarked huge funds for the development of Karachi and Hyderabad, observing that the cities would be receiving a considerable development package after a long span of 11 years. 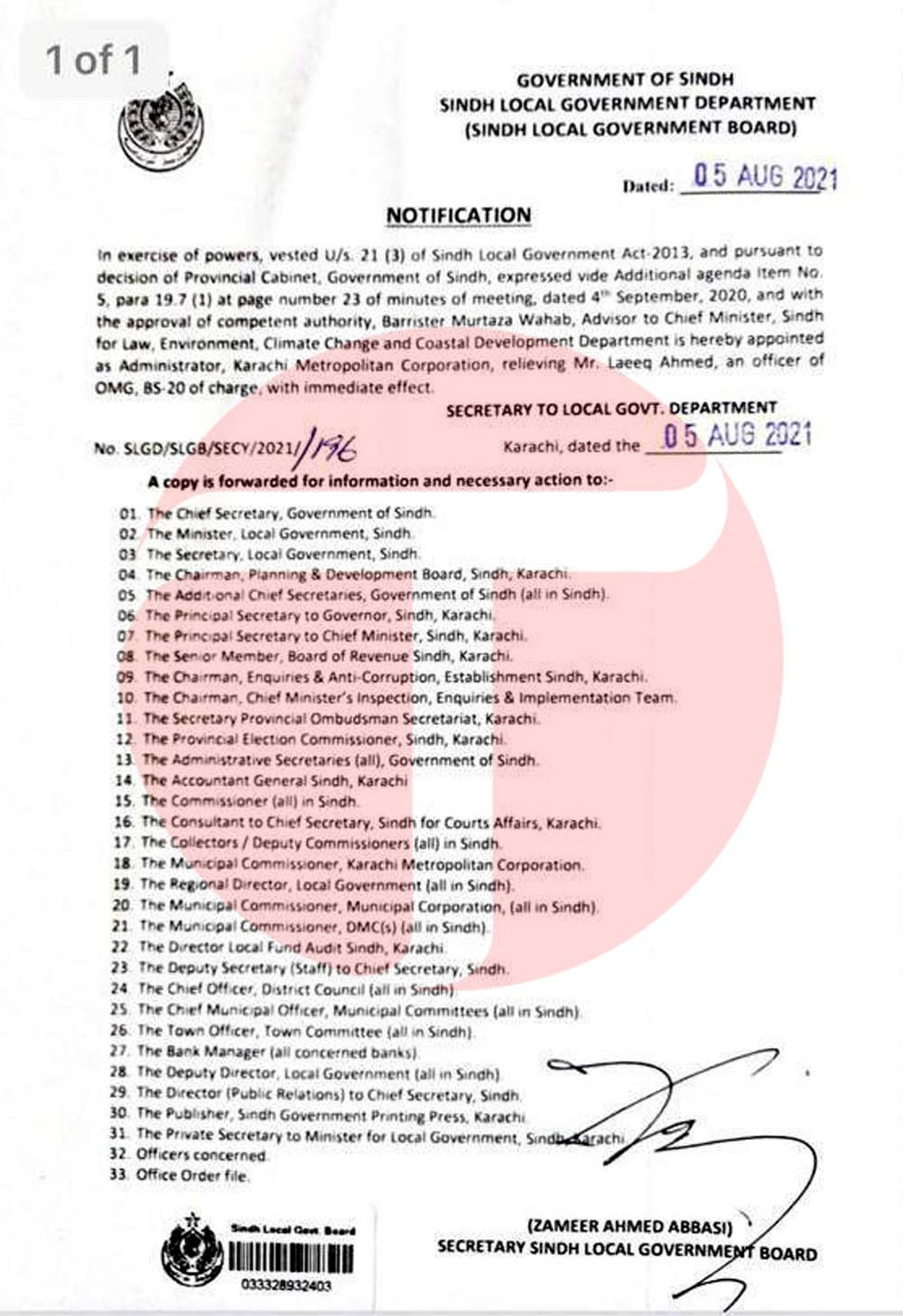 SKMT Karachi all set to open by December next year: PM Imran