Pakistan on Wednesday closed indefinitely Friendship Gate -- the border crossing with Afghanistan in Chaman district of Balochistan -- for all commercial activities and pedestrian traffic.

The decision came after the Taliban said they had captured Spin Boldak, a major district in southern Afghanistan.

With the capture of Wesh Mandi, an Afghan border town, and areas near the Bab-e-Dosti Gate just across the border with Chaman, the Afghan insurgents said they have achieved one of the most important objectives so far during a rapid advance across the country as US forces pull out.

The sudden closure of the border crossing has left people stranded on both sides of the border, in addition to affecting trade between the two countries.

According to sources, stringent security arrangements have been made in Baluchistan’s border areas in view of uncertain situation in Afghanistan.

Meanwhile, video released by the Afghan insurgents showed their white flag flying in place of the Afghanistan flag above the Friendship Gate. 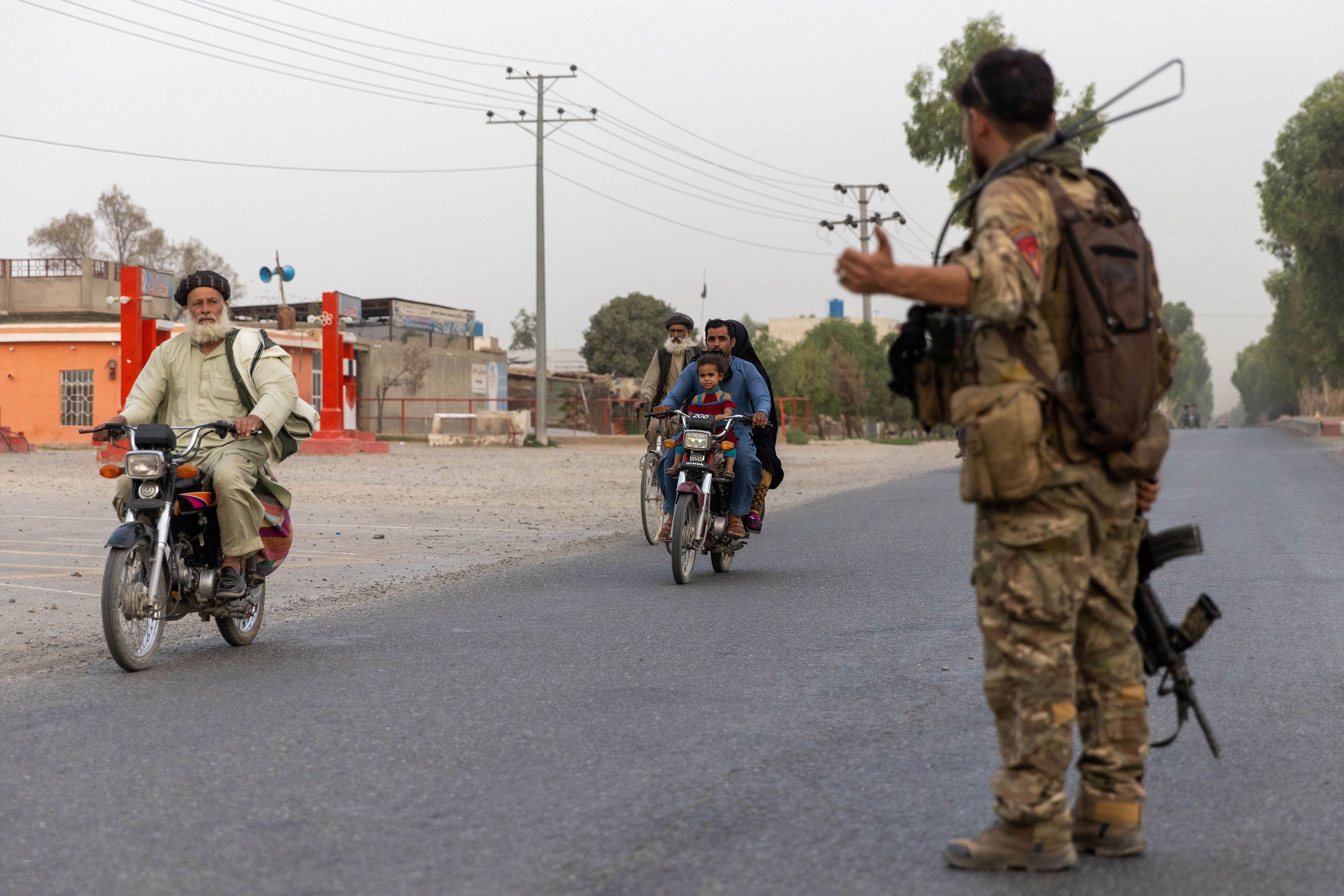 A member of the Afghan Special Forces directs traffic during the rescue mission of a policeman besieged at a check post surrounded by Taliban, in Kandahar province, Afghanistan, July 13, 2021. PHOTO: REUTERS.

"After two decades of the brutality of Americans and their puppets, this gate and the Spin Boldak district were captured by the Taliban," a fighter said to camera.

"The strong resistance of the Mujahideen and its people forced the enemy to leave this area. As you can see, that's the Islamic Emirate flag, the flag that thousands of Mujahideen shed their blood to raise."

Afghan government data indicate that the route is used by 900 trucks a day. Afghan officials said government forces had pushed back the Taliban and were in control of the district.

But civilians and Pakistani officials said the Taliban remained in control of the crossing. "Wesh, which has great importance in Afghan trade with Pakistan and other countries, has been captured by the Taliban," said a Pakistani security official deployed at the border area.

Officials in Chaman said the Taliban had suspended all travel through the gate. The Taliban have in recent days seized other major border crossings, in Herat, Farah and Kunduz provinces in the north and west.

President Ashraf Ghani travelled to the northern province of Balkh on Tuesday to assess security after the Taliban pushed government forces out of several districts there.

Ghani, 72, met civilians and assured them that "the Taliban's backbone will be broken" and government forces would soon retake areas lost to the militants, the Tolo News network reported. 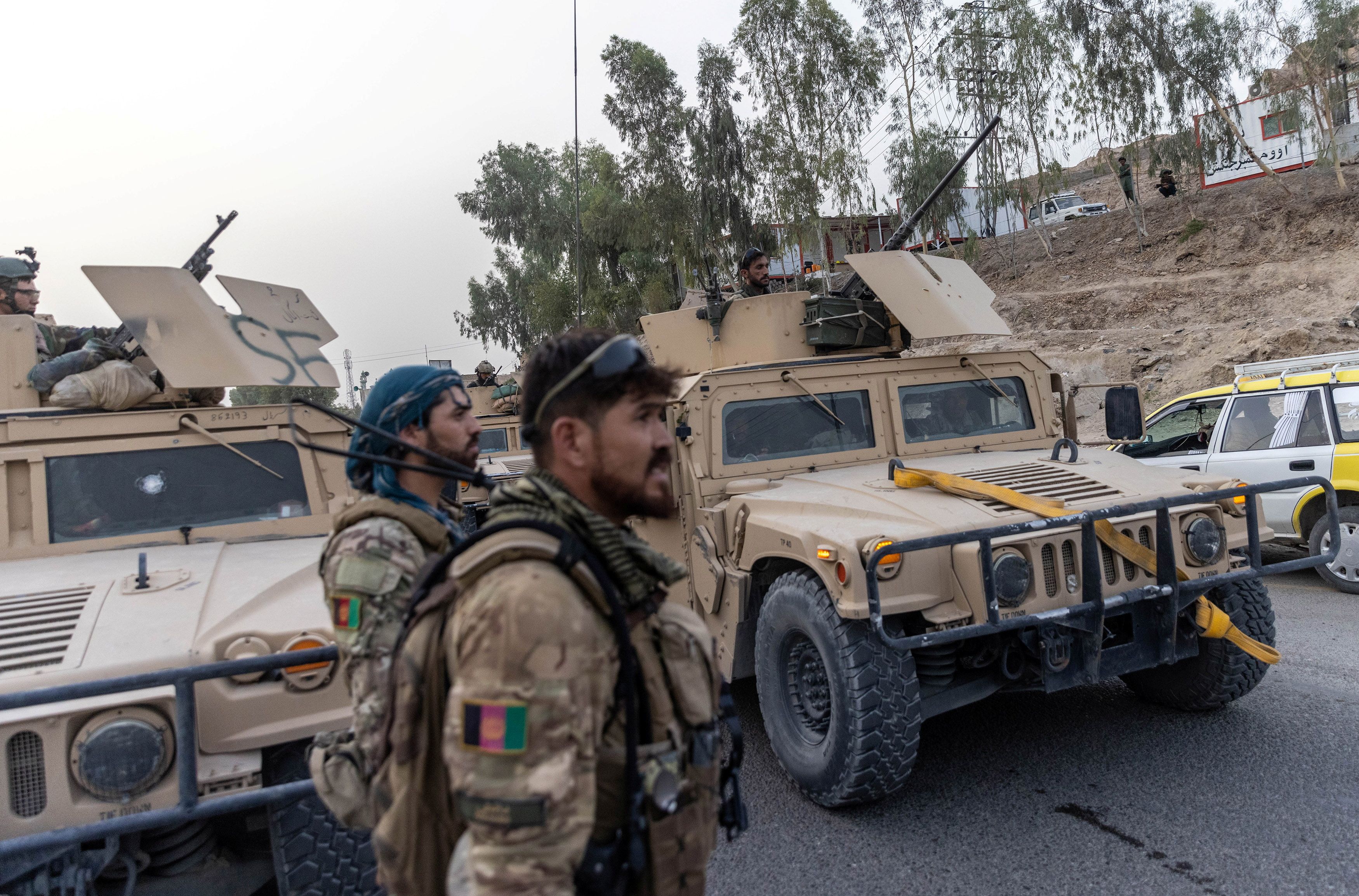 A convoy of Afghan Special Forces is seen during the rescue mission of a policeman besieged at a check post surrounded by Taliban, in Kandahar province, Afghanistan, July 13, 2021. PHOTO: REUTERS.

Border guards in the ex-Soviet country said those feeling included 177 minors, and that two babies had died during the journey to the mountainous and impoverished country.

The Taliban's offensive has seen a stream of Afghans make their way across the border and earlier this months more than 1,000 government troops fled to Tajikistan after the fighters seized a border crossing between the countries.

The militants in recent weeks have brought huge swathes of Afghanistan under their control as foreign troops withdraw, including the county's main Shir Khan Bandar border crossing with Tajikistan.

The border guards said the refugees who arrived over the last two days and included some 64 boys and 113 girls, had crossed from the Badakhshan province, bringing with them herds of livestock.

Moscow, an important power broker in the region was closely watching the offensive, concerned about the security of countries in ex-Soviet Central Asia where it maintains military bases.

The agency cited a statement by Russia's Central Military District as saying the exercises were meant for unit commanders and combat chiefs to ready for "combat operations in a dynamically changing situation".

Interfax reported that the exercises will run until the end of the week.

Russia's defence ministry said in a statement carried by the news agency that servicemen stationed at the military base had "repelled a massive missile strike by a simulated enemy" during the drills on Wednesday.

The 201st base is one of Russia's most important foreign bases and has the aim of helping maintain stability in Central Asia and providing support for Tajik troops.

Set up in 2005 and made up of three separate installations, the base houses about 5,500 troops.

Foreign ministers of SCO countries met in Dushanbe on Wednesday and issued a joint statement expressing their "deep concern over the growing tension in the northern provinces of Afghanistan".

"We urge all parties involved in the conflict in Afghanistan to refrain from using force and actions that could lead to destabilisation and unpredictable consequences in the areas of Afghanistan's borders with the SCO member states," the statement said.

But he added that the Taliban had confirmed and reconfirmed that it would not launch attacks on Afghanistan's neighbours.

Afghanistan to rush troops to border as Taliban extend gains

Afghanistan could descend into civil war

Biden to speak Thursday about Afghanistan amid swift US pullout