The top US general in Afghanistan relinquished command on Monday at a ceremony in the capital, the latest symbolic gesture bringing America's longest war nearer to an end even as the Taliban continue a bloody onslaught across the country.

General Austin "Scott" Miller — the highest-ranked officer on the ground in the war-torn nation — handed command to General Kenneth McKenzie, who will oversee remaining operations from a US-based headquarters. 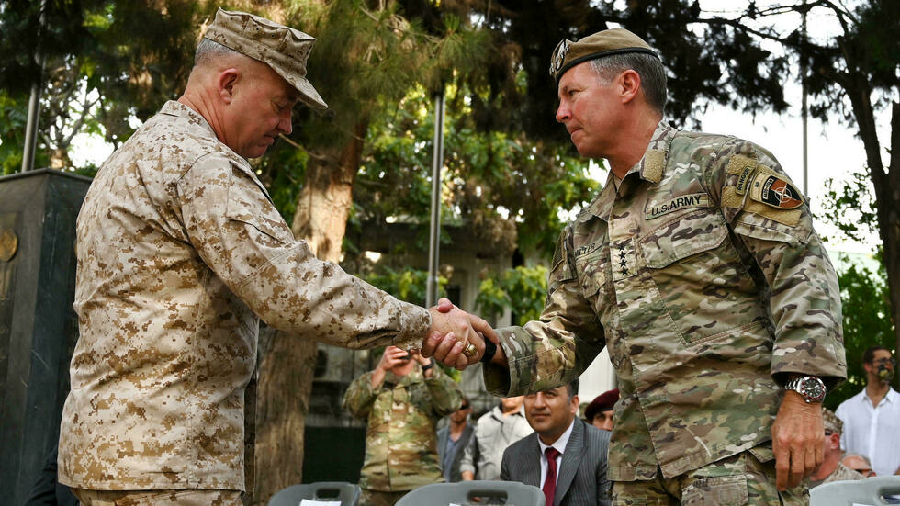 Miller has been in Afghanistan since 2018, but was charged more recently by commander-in-chief President Joe Biden with organising the final withdrawal of US troops, to be completed by the end of August.

The pace of the pullout — and multiple offensives launched recently by the Taliban — have raised fears that Afghanistan's security forces could be swiftly overwhelmed, particularly without vital US air support.

Biden has made clear, however, that America's involvement in a war launched after the September 11, 2001 attacks has to end, and Afghans must chart their own future.

Most of the 2,500 US and 7,500 NATO troops who were in Afghanistan when Biden detailed the final withdrawal in May have now gone, leaving Afghan troops to fight an emboldened Taliban seemingly bent on a military victory

Peace talks between the insurgents and the government supposedly taking place in Doha have largely fizzled out.

"The command of this coalition has been the highlight of my military career," said Miller, who survived a Taliban assassination attempt in 2018 that killed a senior Afghan official he was meeting with.

"I do know that the people of Afghanistan will be in my heart and on my mind, for the rest of my life," he added, after handing the coalition force flag to McKenzie.

The US has already handed over to Afghan forces the vast Bagram Air Base, from where coalition forces carried out operations against the Taliban and militant groups for the past two decades.

Miller steps down at a time when the Taliban have captured a vast swath of territory, seizing dozens of districts, capturing key border crossings and even attacking a provincial capital in recent weeks.

But claims by the hardline group to control 85 per cent of the country are impossible to verify independently — and strongly disputed by the government.

He conceded a Taliban presence "in limited areas", but gave no alternative assessment of how much territory each side controlled.

Analysts say both sides exaggerate the territorial gains and casualties they inflict on each other, while playing down their own losses.

The situation has alarmed foreign nations, however, and on Sunday India became the latest country to evacuate its diplomats as security deteriorates.

Its foreign ministry said staff had been temporarily pulled from its consulate in southern Kandahar, where the Taliban are fighting with Afghan forces on the edge of the city.

Last week, Russia announced it had closed its consulate in the northern Afghan city of Mazar-i-Sharif, while China also evacuated 210 nationals from the country.

Biden says US troops drawdown in Afghanistan is on track

Afghanistan: a possible component of counter-quad or a quintet