Djokovic ready to be first among equals at Wimbledon

Hundreds of rescue workers scour through rubble, as questions arise about the tower's structural integrity

People mourn at the memorial site created by neighbors in front of the partially collapsed building where the rescue personnel continue their search for victims, in Surfside near Miami Beach, Florida, US, June 26, 2021. PHOTO: REUTERS

Searchers worked early on Sunday to find more than 150 missing residents amid the rubble of a Florida condo building that collapsed three days ago as questions arose about the tower's structural integrity.

The death toll rose to five on Saturday after emergency workers found a victim in their methodical search of the site in Surfside, a shore town near Miami, Miami-Dade County Mayor Daniella Levine Cava said during an evening news briefing.

"Our top priority continues to be search and rescue and saving any lives that we can," Levine Cava said.

Workers also found some human remains; three other victims were identified and their family members notified, she said. 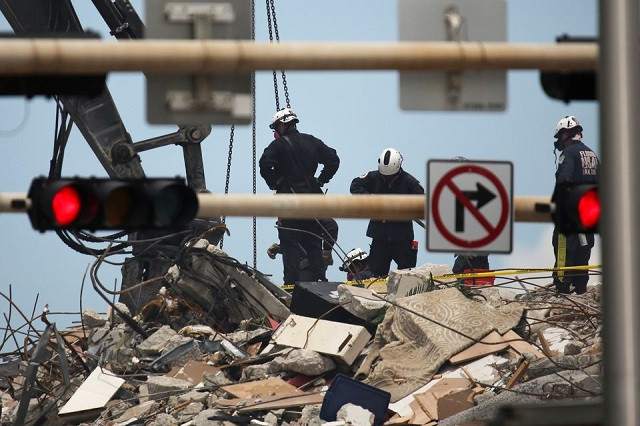 Officials said they harbored hope that some of the 156 people unaccounted for might be alive. Firefighters on Saturday made progress on a smoldering fire and smoke beneath the rubble of the 40-year-old building, allowing rescuers to search with fewer limitations, officials said.

Aided by dogs, infrared scanning and heavy equipment, rescuers hope that people can survive in air pockets that may have formed in the debris.

Our latest photos from the increasingly desperate search for survivors as a smoldering fire hampers rescue efforts at a collapsed Florida condo tower: https://t.co/BcLiHGC2lX pic.twitter.com/J5qenn3Ag8

A 2018 report showed that an engineer found evidence of major structural damage beneath the pool deck and "concrete deterioration" in the underground parking garage of the 12-story oceanfront condominium. 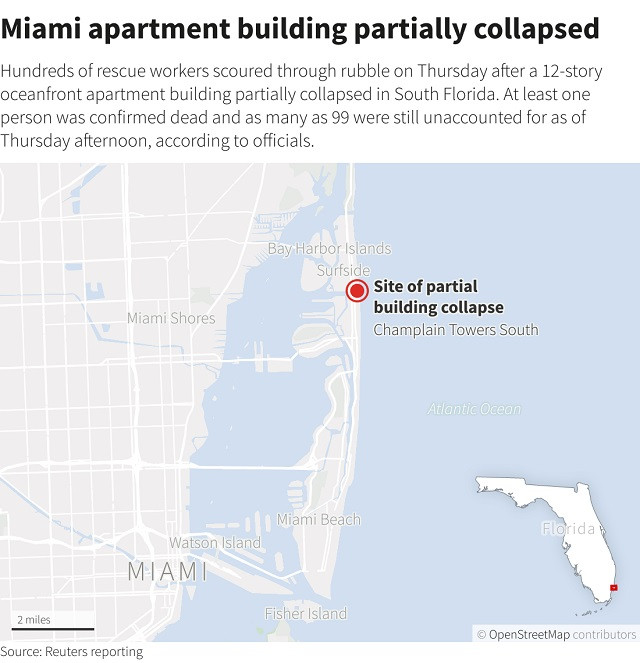 The report, released by town officials, was produced for the condominium board in preparation for a major repair project set for this year.

It was not immediately clear whether the damage described in the report was connected to the collapse about 1:30 a.m. (0530 GMT) on Thursday.

Vice mayor Tina Paul called the structural issue described in the document "very alarming" in an email on Saturday morning.

Donna DiMaggio Berger, a lawyer who works with the condo association at Champlain Towers South, said the issues outlined in the 2018 report were typical for older buildings in the area and did not alarm condo board members, all of whom lived in the tower with their families.

She added that the board had taken out a $12 million line of credit to pay for the repairs and asked owners to pay $80,000 each. Work had started on replacing the roof ahead of hurricane season and the board was gathering bids for the concrete work, but the pandemic slowed the project, she said. 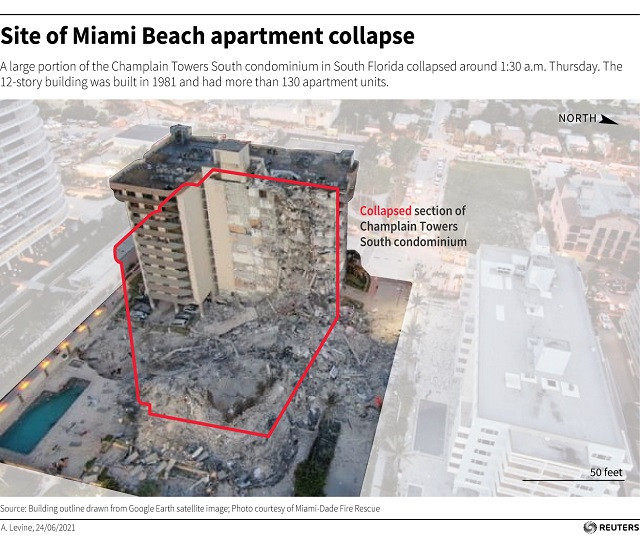 The condominium was also preparing for recertification this year, a safety requirement for buildings older than 40 years in Florida.

Officials said the county would audit all buildings more than 40 years old within the next 30 days to ensure they have been recertified.

Satellite data from the 1990s showed the building was sinking 1 to 3 millimeters per year, while surrounding buildings were stable, according to Florida International University professor Shimon Wdowinski.