Despite financial constraints and a lukewarm response from the federal government regarding the release of due share from the divisible pool, the Sindh government unveiled on Tuesday a development portfolio of Rs329 billion for the next fiscal year. This is a 41 per cent increase from the Rs232b allocated in the outgoing year 2020-21.

According to the budget documents available with The Express Tribune, the Sindh government the Rs329b development outlay includes, Rs222.5b for the provincial development plan, Rs71b for foreign funded projects, Rs30b for districts and an estimated Rs5.37b in federal grants.

In the outgoing year (2020-21), the total development portfolio of the provincial government was estimated at around Rs232b with Rs155b for the provincial Annual Development Programme (ADP), Rs54b for foreign funded projects, Rs15b for districts and Rs8.3b in federal grants.

However, the development targets as planned in the budget could not be achieved because of different factors, including delays in releasing funds by the federal and provincial finance departments and the diversion of funds for Covid-19 related programmes. With this, the revised estimates for the development portfolio of the current fiscal year stood at Rs160b.

"We realise that we have not spent much of the development funds in the outgoing year. Despite this, we have enhanced the provincial ADP by 43 per cent - from Rs155b to Rs222b. A 100 per cent increase in the district ADP, from Rs15b to Rs30b, 30 per cent increase in foreign-funded projects, from Rs54b to Rs71b," said Sindh Chief Minister Syed Murad Ali Shah, who also holds the portfolio of the finance department, while presenting the budget.

Growth has been shown in the development budget except for federal funded projects, which show a minus 3.5 per cent growth in the allocation for next year - Rs5.3b as compared to Rs8.3b in the current fiscal year.

According to the budget books, a total 3,315 schemes have been included in the provincial ADP at an estimated cost of Rs222.5b in which 1,670 are news schemes worth Rs84.11b. These comprise roughly 37 per cent of the development programme and indicate a 142 per cent growth as compared to the current year's budget. Besides, Rs138b - 15 per cent increase - have been set aside for the 1,645 new schemes.

In his budget speech, Shah said that 1,033 schemes have been identified for completion in the first and second quarters and maximum resources would be provided for their timely completion. 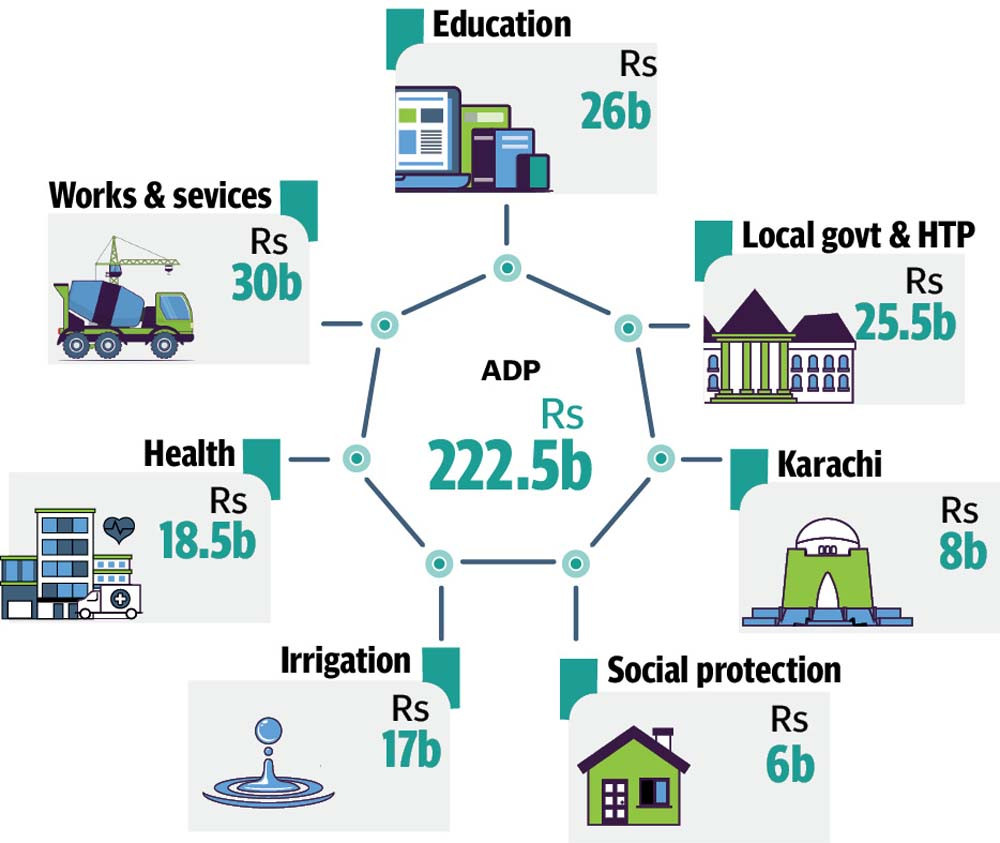 In next year budget, health remains a priority sector. The total non-development budget estimates for the sector (excluding medical education) has been enhanced by 29 per cent from Rs132b to Rs172b. In the development side, the ADP of health is pitched at Rs18b. Moreover, Rs7b have been allocated, with an overall increase of 10 per cent, to combat polio, tuberculosis (TB) and AIDS, the lady health workers programme, hepatitis control and the expanded programme for immunisation and so on.

For the education sector, a total of Rs277b has been allocated for the next fiscal year as compared to Rs243b in the current fiscal year. This shows a 14 per cent increase.

The ADP includes Rs26b, which entails Rs14b for school education, Rs4b for college education, Rs800m for the empowerment of persons with disabilities, Rs1200 million for STETVA and Rs6b for universities and boards. Besides funds in the provincial ADP, the government has earmarked Rs4.28b for foreign project assistance of the education sector. In the current fiscal year, Rs78b was earmarked for the local council as a non-development expenditure. For the next year, the government has proposed an allocation of Rs82b. Of this, Rs25b is part of the ADP.

"There are projects for the Karachi division in the next provincial ADP and district ADP and the total cost of the schemes stands at Rs61.91b," said Shah.

According to the sector wise budget allocated in the annual development plan (ADP) Rs9b has been allocated for the home department, Rs5b for agriculture, Rs17b for irrigation, Rs8.2b for transport, Rs1b for minorities, Rs16.5b for the public health and engineering department, Rs2.5b for the energy sector, Rs1,200m for the environment, Rs300m for food, Rs350m for population and welfare, Rs1,500m for industries and Rs320m for the women development department.

IHC issues notices to respondents on maintainability of PTI petition