Portugal's new wave of talent waiting in the wings behind Ronaldo

In boost for Africa, Senegal aims to make Covid shots next year

Jannat Mirza apologises for hurting sentiments of the Christian community

Tiktoker Jannat Mirza recently landed herself in hot waters after sharing videos wearing a pendant crucifix around her waist, leading many from the Christian community to feel offended, and rightfully so.

The Tiktoker, who has amassed around 13.9 million followers on the video sharing app and enjoys another 2.2 million followers on her Instagram, took down the videos post backlash. But it seems she was too late, provided the jury was already out on social media, a complaint against her had been submitted to the Deputy Director FIA and a veteran celebrity also passed her judgment against her.

Renowned actor, comedian, singer and playwright Bushra Ansari, upon acknowledging Mirza’s apparently insensitive and irresponsible behaviour, commented on one of the posts featuring her now-deleted video. “Aik dur fitteh mun to banta hai (this calls for a face palm), in jaahil stars par afsos [hai] (disappointed by these ignorant stars). Na Islam ka pata na kisi or religion ka (they have no regard for Islam, nor any other religion),” she wrote.

Following this, Mirza shared Ansari's comment and asked her not to judge without knowing. “This is not okay at all!” she wrote. “Please do not judge anyone without knowing anything Amma Jee,” added the social media celeb. “I respect you a lot but you can’t defame anyone without knowing the facts. Islam ki baat ap kese karsakti hain aunty, ap koi tableeghi jamaat nahi chala rahin (besides, how can you preach Islam when it’s evident you’re not running a transnational Islamic movement yourself).” 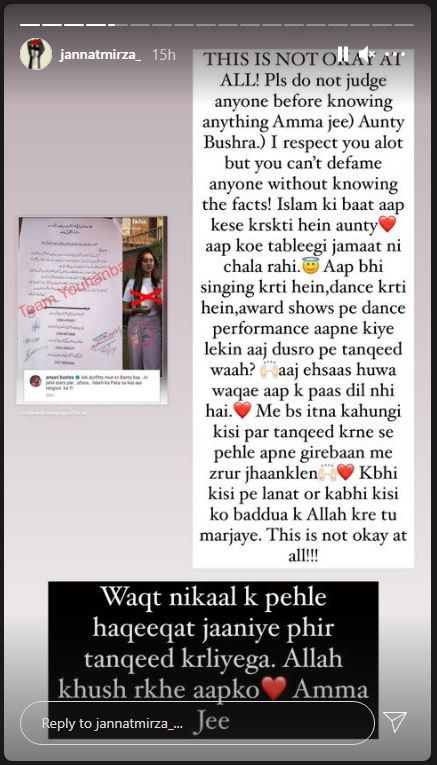 In her elaborate note against Ansari, Mirza went on to call her out for ‘singing’, ‘dancing’, ‘performing’ and according to her, doing in essence the same things that she does. “I would just request you to look at your own shortcomings before judging me for mine,” she concluded. 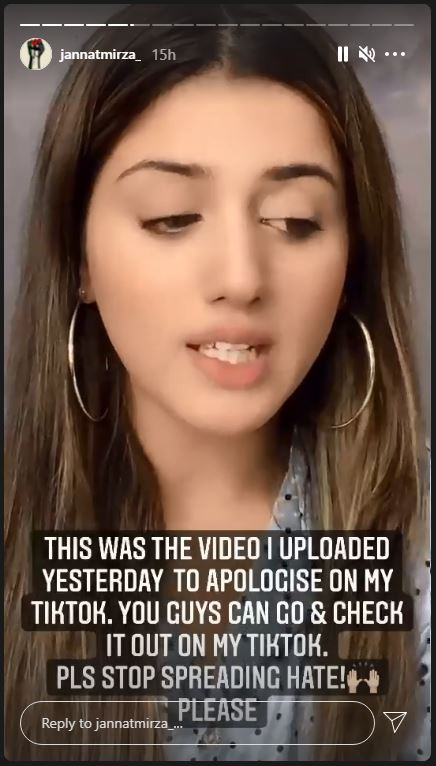 In a follow-up video, Mirza acknowledged she had made a mistake, and clarified that the chain she donned came as a PR package, which she promoted without checking. “My intention was never to hurt anyone, I found out through the comment section of my videos after posting them that the chain I’m wearing on my waist has a Christian amulet and I deleted the videos instantly after. It was my fault and I am accepting my mistake,” she says in the video currently available on her Insta Stories.