Pakistan calls upon UN to play role for resolution of Palestine, Kashmir disputes

Foreign Minister Shah Mahmood Qureshi on Thursday called upon the United Nations (UN) to play its role for the resolution of the Palestine and Indian Illegally Occupied Jammu and Kashmir (IIOJK) disputes, that have been on UN Security Council's (UNSC) agenda for over seven decades.

The foreign minister's remarks came during a joint news conference along with UN General Assembly President (PGA) Volkan Bozkir after a meeting in Islamabad earlier today.

Pleased to have had constructive discussions with @volkan_bozkir on a wide range of political and socio-economic issues today including:
➖The inalienable right to self-determination of the people of Jammu & Kashmir and Palestine
➖ The Afghan peace process and Pakistan’s role. https://t.co/YNT88mbthf pic.twitter.com/dY3a6loKIG

"There are similarities between the Palestinian situation and that of Jammu and Kashmir," the FM said. "The oppressed people in both the territories faced with the worst form of human rights violations are demanding their right to self-determination."

The FM categorically stated that the IIOJK dispute is a reality and nobody can remove it from the agenda of the UNSC.

"Pakistan expects the UN to continue to play its leadership role for the revival of the peace process in the Middle East," the foreign minister added.

"The fire can be extinguished through dialogue and a two-state solution in accordance with the UN Security Council resolutions."

FM Qureshi maintained that timely humanitarian assistance should also be provided to the Palestinians affected by Israeli aggression.

Condemning the Israeli atrocities in occupied Palestinian territories, the foreign minister commended the role of Bozkir in organising a special meeting of the UN General Assembly last week.

He emphasised that the international community must fulfil its responsibility in protecting the legitimate rights of the Palestinian people and take steps to facilitate a just, comprehensive and lasting solution in line with the UN resolutions envisaging the establishment of a viable, independent and contiguous Palestinian state, with pre-1967 borders, and Al-Quds Al-Sharif as its capital.

Focusing on the importance of the UN reforms, the foreign minister underscored the need to transform the organisation into a more effective, transparent, democratic, accountable and efficient body. Appreciating the role of the PGA in that regard, he reiterated Pakistan’s support for a comprehensive and consensus-based reform of the UN Security Council.

Regarding the Afghan peace process, the foreign ministers reiterated that Pakistan had supported the Afghan reconciliation process and will continue to do so.

Pakistan is supportive of the Istanbul process and international conference that should take place at the earliest in Istanbul, he further said.

UNGA President Bozkir said both Palestine and IIOJK disputes emerged at about the same time and that the UN position on the IIOJK dispute was governed by its charter and the applicable UNSC resolutions.

Furthermore, he was also appreciative of Prime Minister Imran Khan's Ten Billion Tree Tsunami project, debt relief initiative and the steps taken to keep the spread of Covid-19 in check.

Welcoming the PGA’s initiative of “Vaccine 4 All”, the foreign minister re-emphasised Pakistan’s call for universal access to affordable vaccines for Covid-19. He stressed the importance of removing export restrictions on vaccines and essential materials for the benefit of humanity.

PGA Volkan Bozkir is on an official visit to Pakistan from 26 to 28 May 2021. Mr. Bozkir – the first Turkish national to preside over the UN General Assembly – is a former diplomat and a senior politician.

Earlier today, during a meeting with President Bozkir at the Ministry of Foreign Affairs, FM Qureshi stated that establishing peace in the Middle East without resolving the Palestine issue on a permanent basis was impossible. 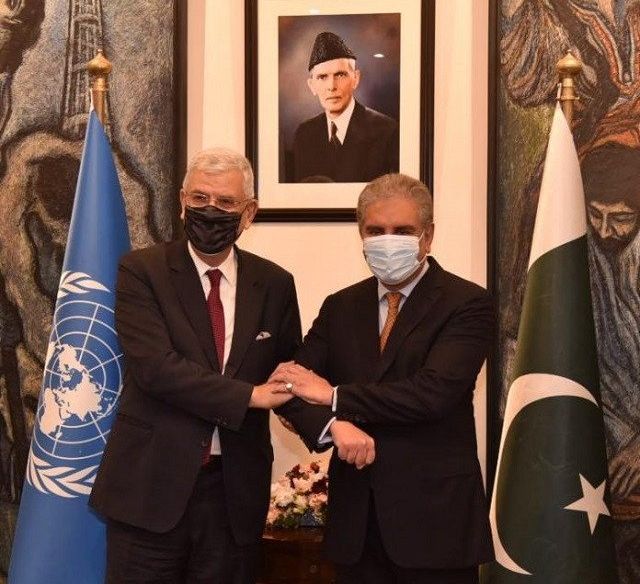 "A ceasefire was the first step towards stopping Israeli atrocities," the FM said. "The implementation of the UN Security Council resolutions was the only just solution to the issues of Palestine and Kashmir."

Welcoming the UNGA president, who arrived in Islamabad on a three-day visit yesterday, the foreign minister appreciated the president's efforts to convene an emergency session of the General Assembly on Palestine. 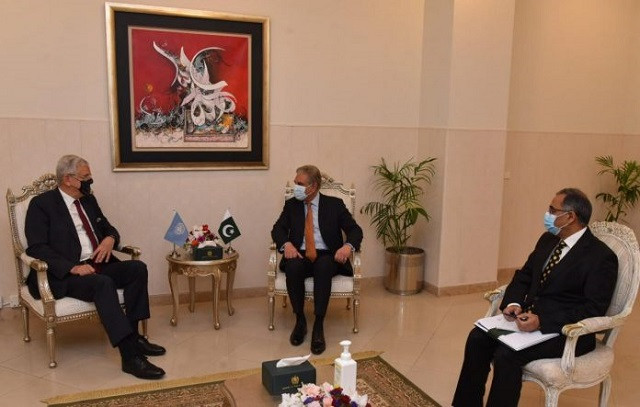 Similarly, the foreign minister maintained that there could be no peace in South Asia either unless the Kashmir issue was resolved.

He said Pakistan wanted peace in Afghanistan and intended to continue playing a conciliatory role in the Afghan peace process.

The foreign minister appreciated the UNGA president's ‘Vaccine for All’ initiative, adding that it was necessary to make everyone safe if the pandemic had to be overcome.

Foreign Secretary Sohail Mahmood was also present at the meeting.

‘Nawaz must return at the earliest to save his party’

FM Qureshi’s CNN remarks: a storm in a teacup?

Twitter responds to FM Qureshi being accused of antisemitism