‘World needs to do more on climate crisis’ 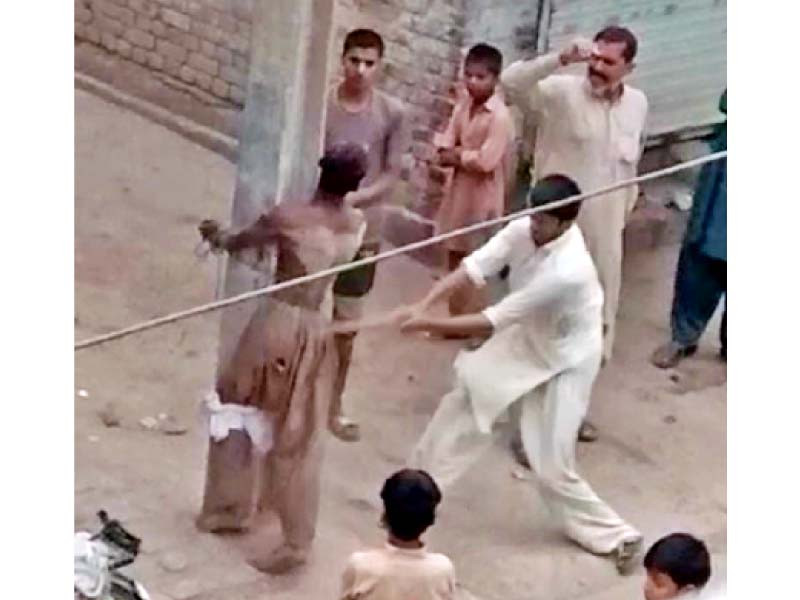 People tied a differently-abled youth to a pole in Tandlianwala and tortured him on suspicion of theft. PHOTO: EXPRESS
TANDLIANWALA:

Six suspects were arrested for allegedly tying a disabled youth to a pole and torturing him on suspicion of theft.

Police said three days ago the suspects including Abu Bakar, Abu Sufiyan, Sher alias Sheera, Allahyar and seven others had set up a butcher shop in Mohalla Rasoolpura, Tandlianwala where they tortured a 17-year-old differently-abled Mohsin Raza alias Toti Malang. They tied his hands and a foot to a pole on suspicion of theft while they tortured him and made a video that went viral on social media.

Imran said, “I had sent my mentally retarded brother Mohsin Raza to pick up yoghurt at the time of Sehri. Meanwhile, the accused were sitting on a Phate in Mohalla Rasoolpura Chowk when they allegedly molested my brother, in reply my brother abused them and escaped. On which suspects tied him to a power pole and tortured him. We are eight siblings with two mental disabilities.”

The victim's brother demanded of the police officers to arrest the suspects immediately. The named suspects attacked and had beaten the plaintiff, Imran Raza Hashmi's house and threatened to kill him if he does withdraw the case.

After the video of the torture of the accused went viral on social media, the police registered a case against the suspects under different section of Pakistan Penal Code (PPC) including 147 (Punishment for rioting), 149 (Every member of unlawful assembly guilty of offence committed in prosecution of common object), 342(Punishment for wrongful confinement), 355(Assault or criminal force with intent to dishonour person).

CPO Sohail Chaudhry took notice of the matter and formed teams to arrest the suspects. Teams raided different areas and arrested six accused including Abu Bakar, Abu Sufyan, Sher alias Shera and Allahyar. On this occasion, CPO Sohail Chaudhry said that no one is allowed to take the law into his own hands. Legal action will be taken against anyone who takes the law into their own hands and we will provide all possible justice to the affected youth.

Earlier this month, Punjab Police registered a case against two men on charges of recording an objectionable video of an old man and making it viral on social media.

According to the police report, 60-year-old Waryam, a resident of Jhumra Road 293 RB, filed a complaint stating that the incident took place when he went to village 159 RB to buy fodder for his cattle five days ago. “A local resident Wahid Buta and an unknown man accompanying him started mocking me. Wahid then pulled off my clothes and his accomplice made a video that they then made viral on the internet.”

Waryam added, “The suspect Wahid and his accomplice have abused me by making a video of me and making it viral on social media. Action should be taken in this regard.”

Police registered a case against the two suspects under sections of PPC including 500(punishment for defamation), 355(Assault or criminal force with intent to dishonour person), 292( Sale, etc, of obscene books, etc) and 34(Acts done by several persons in furtherance of common after the video went viral on social media. The police have also started searching for the suspects.