The late Professor Riazuddin was an extraordinary scientist who also happened to be a quiet, gentle and humble man. To those who know him, he was also second to Professor Abdus Salam among Pakistani physicists. Quietly (like he did most things), he led the initial efforts in crafting the theoretical models for developing Pakistan’s nuclear capability.

His memoirs carry a similarly quiet and straightforward narration of facts. Unusual in a society that is far more inclined to taking to gloating and chest thumping, it is a first of its kind coming from a physicist who selflessly served Pakistan. For this reason alone, the editors are to be commended for compiling this volume.

Professor Riazuddin was the founder director of the Institute of Physics at the University of Islamabad, which was established in 1967. It was nearly nine years later in 1976 that the university was renamed as Quaid-i-Azam University (QAU).

There are two episodes in the life of Professor Riazuddin occupying most of the narrative of the book: the lonely, painstaking and intriguing work that led to the tests at Chaghai on May 28, 1998, which of course is recorded in an understated manner but the other is the chain of events covered in relative detail relate to procurement of a Van De Graaf accelerator at the National Centre for Physics (NCP) Islamabad in 2005. The emphasis is on facts. There is a hint at pressures and manipulations employed, leaving much to one’s imagination.

The sections related to the personal life leave the reader clamouring for more information. For example, I am intrigued by his interactions with the famous poet Sahir Ludhianvi. There is also not much about his worthy brother and their mutual interactions, apart from a couple of incidents. One is left to wonder if the second person he mentions, who kept on attending Professor Abdus Salam’s evening lectures on quantum mechanics (1951-53) at the University of the Punjab, was in fact Professor Fayyazuddin.

Earlier I had enrolled in the PhD programme under Professor Fayyazuddin. From a distance, during those days it was often difficult to tell them apart, close up one could make out that Professor Riazuddin was quieter of the two.

In reading the memoirs, most people may focus on the narrative related to the atomic bomb and the saga of Van de Graaf accelerator at the NCP. However, there are other significant documents that demand attention. Professor Riazuddin’s writings dealing with our society, basic and applied sciences and education policies (all detailed in chapters 14 through 18) are instructive for their simplicity, broad appeal, everlasting relevance and directness. One hopes those writings find understanding and comprehension from readers just as much as the aforementioned excitement-filled ones do.

My first introduction to Professor Riazuddin was on a bone chilling day in January 1974. We 13 students were huddled around a single gas heater in a large room, waiting for an introduction to quantum mechanics. Five minutes before 1:30 in the afternoon, he was spotted coming up the stairs of the physics building.

Having previously heard about his success and brilliance, we were in awe of this man. As the class started, we tried to hang onto his every word and ensure our notes detailed every morsel of brilliance he was willing to bestow on us. Each class started with a clean board and the chalk board covered almost the entirety of one wall - roughly five meters. Professor Riazuddin started writing from the top left and when the board would fill up, he would erase it and start all over again. Questions were answered with precision. During those 90-minute lectures throughout the year, seriousness held, and we all developed a deep and abiding respect for him. He would arrive at the appointed hour and leave each class walking across the physics building taking those small but quick purposeful steps.

The summer of 1977 at the ‘Second International Summer College on Physics and Contemporary Needs,’ was the first time that I had occasion to talk to him informally. I picture the strolls on the roads of Nathiagali. We talked about the utility and relevance of the college and were topics covered in enough detail? Those strolls continued for a few years for me.

The institution of the college, nurtured by him is now in its 46th year. I am compelled to correct and expand upon one incident. In Chapter six, the late Professor Faheem Hussain cites the termination from service of Professor Riazuddin at QAU as having predated his move to Dhahran, Saudi Arabia. There is also an impression that he resigned and left for a quiet professorship in Saudi Arabia. As it is, fate had me at Dhahran from December 1982 to April 1983. A couple of times a week, I used to visit Professor Riazuddin at the King Fahad University of Petroleum and Minerals.

One morning Professor Riazuddin handed me half a sheet of paper – perhaps the third or fourth carbon copy of a note from a manual typewriter. The text was blurred and difficult to read. In the sweetest Punjabi we had grown accustomed to, he asked me to take a look. It was the notice of termination from the QAU. I read the note and looked at him, unable to make any sense, unable to speak, unable to stay quiet!

Professor Riazuddin had known about it a day earlier through a write up by Professor Faheem Hussain, published in The Muslim, an Islamabad daily. It would help if the article had been part of the memoirs. In its absence, allow me to set up the relevant context:

Following the military takeover in mid to late 1979, rules were tightened to curb faculty travel abroad. Getting a ‘No Objection Certificate’ for travel to seminars and conferences abroad got tougher. Professor Riazuddin had left the country in early 1979 on a leave of absence. In November 1980, Shaikh Imtiaz Ali was appointed as the Vice-Chancellor (VC) of QAU. Overnight, most male senior faculty members, on instructions from their bosses, exchanged their coats and ties to shalwar-kameez coupled with a vest coat. At the Physics Department Professor Arifuzzaman Siddiqui and Faheem sahib stood out among the senior faculty. One by continuing as ever and the other by conspicuously donning jeans and t-shirts daily. At around the same period people started to insert a “Dr” between “Professor” and their names – perhaps it made them feel more accomplished.

Shaikh Imtiaz Ali played havoc with rules and regulations governing the departments and the faculty. Departmental chairpersons became accountable only to the VC, foregoing to seek faculty input. Decisions flowed down. With all due respects, even in the Department of Physics, where some of those who came between 1966 and 1968 with lofty ideals, now had narrower interests.

After traveling to Virginia, USA from Trieste, Italy, Professor Riazuddin applied for an extension to his leave. The University asked him to sign an indemnity (surety) bond, while Professor Riazuddin reminded them of his numerous trips and returns without a bond and that the service statutes did not have such a provision (The communications back and forth between the professor and administration on the subject leading to the termination notice should be on record at the QAU).

A couple of weeks after this incident, Professor Fayyazuddin (then serving at the King Khalid University at Riyadh and also on leave from QAU) visited Dhahran. He called me aside, took me to an electric typewriter and dictated a letter of resignation from his position at QAU and in this way, QAU lost two distinguished physicists within weeks.

The summer of 2005 was when things got heated with the proposal of the pelletron being placed at the NCP, as mentioned in the memoirs. Professor Riazuddin was at that time the Director-General. Having a June 25, 2005 article of Dr. Atta-ur-Rahman, I was as perplexed at my former colleagues at QAU. At this stage, I took the unusual step of writing a letter to a distant cousin, transmitting it via email to my sister. She personally delivered a print of my letter to General (R) Pervez Musharraf. Subsequently he called and I remember pressing him to intervene and seek input from Professor Riazuddin. Those efforts did have some, though not the desired effect. One unwelcome outcome was a phone call in early August at 2 AM in the morning. Someone asked for a mailing address. A week or so later, I received a thick stack of papers, the curriculum vitae of Dr. Atta-ur-Rahman.

In 2007, the pelletron arrived and Professor Riazuddin was pushed aside to an emeritus position. Fortunately, however, he was spared office space. He remained active in research and much later thankfully, took up the writing of the memoirs. Perhaps he had more to write. We shall never know. 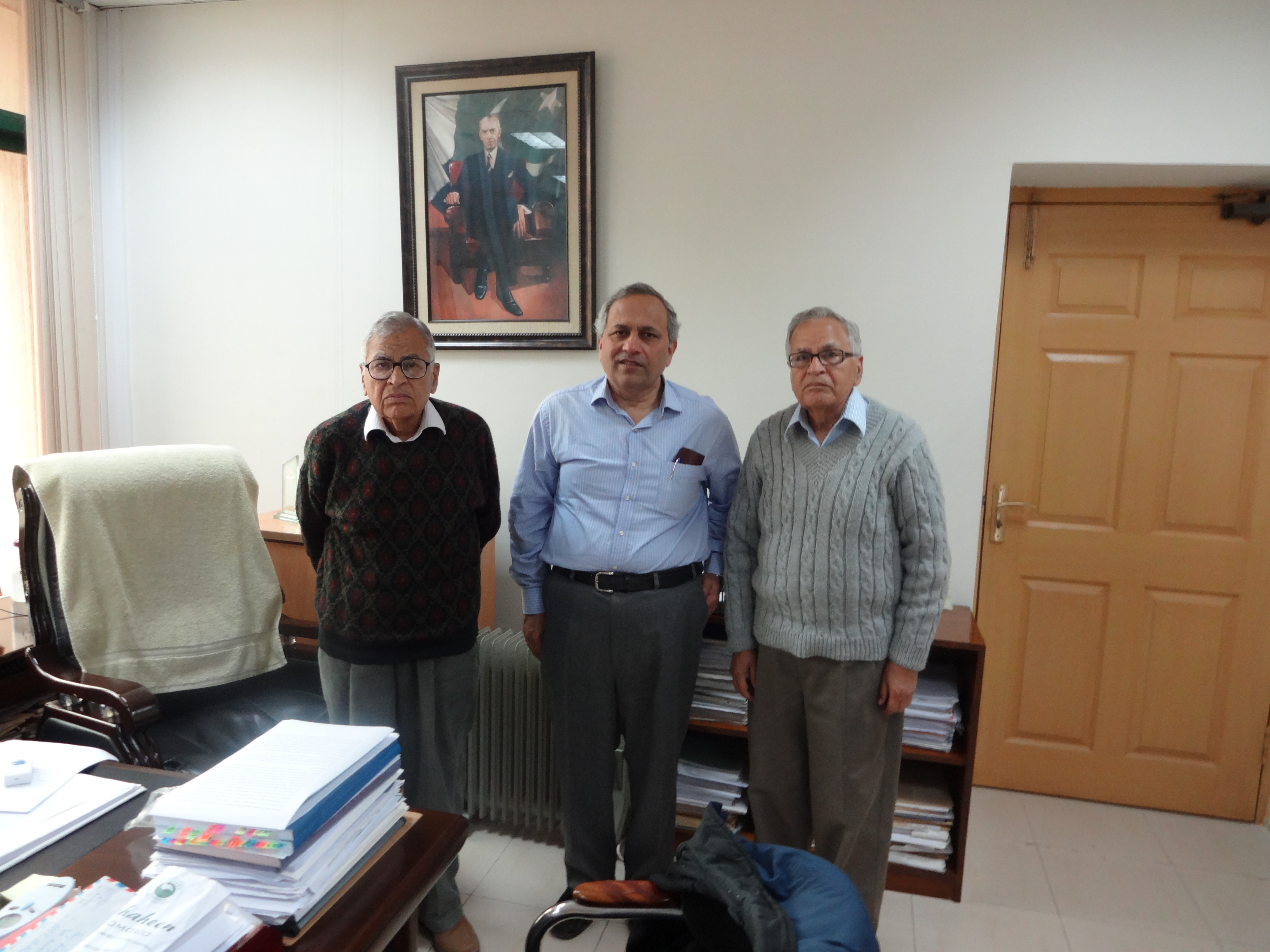 Professor Riazuddin’s dedication to development of science in Pakistan, and to QAU continued in his personal capacity. Not widely known, Professor Riazuddin established a family trust that funds scholarships at QAU. These started in 2007 and now cover all the natural science departments at the Master’s level and for the Physics Department at the M.Phil. level too. The family has renamed the trust as Riazuddin Trust for Science Education and Research in Pakistan and expanded its domain. All earnings from the memoirs benefit the Riazuddin Trust.

Perhaps it is pertinent here to bring forth some aspects of his personality apart from academics and science. In January 1983, we travelled to the holy cities of Makkah and Medina. I came across both brothers at the Holy Prophet’s mosque in Medina. Sitting there, while Fayyazuddin sahib talked about history and the Turkish architecture surrounding us, Professor Riazuddin was focused solely on his recitation of the Holy Quran and prayers. How can I ever forget his thoughtfulness?

We were in Trieste, Italy when in the spring of 1984 Professor Riazuddin visited. As all young parents, we had a tough time deciphering what caused our infant son to cry. The crying is customarily ascribed to colic and gripe water often soothes. The problem was we could not find it on the shelves in pharmacies. Someone had told Professor Riazuddin of our quandary and on his way through London he picked up bottles of Woodward’s Gripe Water.

And his simple and unpretentious nature? One evening he graced our apartment in Trieste. It was near dinner time and there was no dinner. I ran down and got into the corner store just as it was shutting down. All I could grab was a box of noodles. We had noodles with homemade tomatoes and onion sauce. It remains a memorable dinner for us.

When in late January 2013, I walked into the office of Professor Riazuddin at the NCP. He was working; an open journal, calculation in progress. Looking up, he rose to greet me with a smile that we forever miss. Soon Professor Fayyazuddin joined us and we chatted for a while. He was gracious and kind. It seemed Professor Riazuddin had aged more than his brother. Now as I look closely at the picture of us three, I see him in discomfort. I had no idea of the pain he endured.

As I walked out, I saw Professor Riazuddin walk back to his desk, grab the pen and pick up the work from where my entry had disrupted the chain. Above him was a portrait of Mohammad Ali Jinnah.

(The writer is a former student of Professor Riazuddin and was a member of the QAU Physics faculty from 1984 to 1997.)