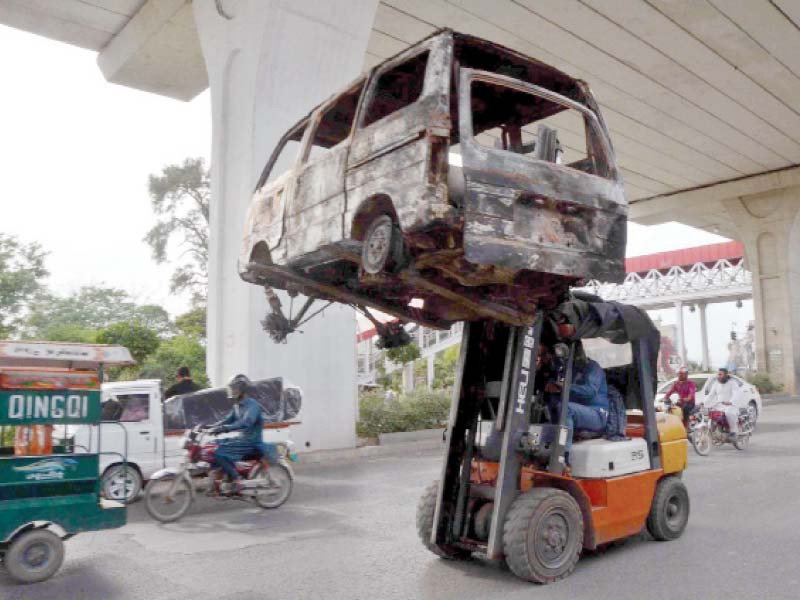 A traffic warden uses a forklift to remove a burnt vehicle from Murree Road after a police operation against protesters in Rawalpindi. PHOTO: AFB
RAWALPINDI:

Residents and commuters in the garrison city faced difficulties as protesters continued their sit-in for a third consecutive day on Wednesday near Liaquat Bagh and in Gujjar Khan, Rawat, and Taxila. The traffic was affected badly, creating problems for the commuters while the traffic police shared alternate routes for motorists.

Muhammad Naeem, a resident, said people faced problems due to long queues of vehicles, adding alternate roads were congested after vehicles diverted to those routes. "I had to walk for two hours due to the traffic jam as the roads were blocked and there was no use of hiring a vehicle," said Hakeem Abbasi.

Meanwhile, about 135 security personnel have been injured, including three paramilitary officers, in clashes with the activists of a religious party in the past three days while over 150 protesters have been booked as they continued to resort to violence when they were asked to end the blockade, pelting stones and wielding sticks.

The police started its operation early morning on Wednesday, which continued for more than six hours as security agencies cleared all roads blocked by the protesters amid strong resistance. As a result of this, 98 policemen were injured in the Rawalpindi division while 30 sustained injuries in Jhelum, five in Attock and two in Chakwal.

The police arrested 152 workers of the religious political party, including members of the top tier leadership. The suspects were detained in different police stations, the spokesperson informed. He said that 46 of these workers and leaders were from Rawalpindi district, 28 from Attock and 30 from Jhelum district.

Sources in Adiala jail said that 46 suspects have been detained for two weeks under MPO-3. They added that the police were inspecting past records of the booked suspects and they would be arrested if found involved in any offences.

The spokesperson said that cases had been registered against the protesters in different police stations of Rawalpindi under the Anti-Terrorism Act responsible for the deteriorating law and order situation in the city. The accused will be presented in court today (Thursday), they added. The spokesperson further stated that senior officers of the Rawalpindi police, including SSP Operations Shoaib Mehmood, SSP Investigation Muhammad Faisal, and Divisional SPs also participated in the operation.

Furthermore, Punjab Rangers with the help of police conducted a major operation on Murree Road to disperse the protesters. Clashes between protesters and Rangers personnel left more than 90 people injured while dozens were arrested.

The area from Murir Chowk to Waris Khan Stop was blocked by the protesters along with taking control of the metro bus track and three metro stations. The police made numerous attempts to disperse the protesters, however, when the situation got beyond their control, the Punjab government sought the help of the Punjab Rangers.

Rangers personnel launched an operation at the site in the early hours of the morning, using rubber bullets against the protesters on the metro bus track. After three-hour-long clashes, the tracks were cleared at 6 am as dozens of protesters were arrested. The operation was led by Rawalpindi Commissioner Gulzar Hussain Shah, Regional Police Officer (RPO) Imran Ahmar, City Police Officer (CPO) Ahsan Younas while senior Rangers officials were also present at the site. CPO said that no one would be allowed to create unrest and anarchy under the guise of religion.

Moreover, the Rawalpindi administration removed obstructions from Faizabad Interchange and other routes to Islamabad while also beginning an assessment of the damages incurred.

Meanwhile, residents of Gawalmandi, Iqbal Road, College Road, Arya Mohalla, and other areas were distressed due to heavy shelling and firing of rubber bullets. Later, a clean-up operation was launched during which the staff of Rawalpindi Waste Management Company (RWMC) and Rawalpindi Municipal Corporation (RMC) removed stones and debris from Murree Road, following which traffic was restored.