Pakistan Tehreek-e-Insaf (PTI) MPA Kareem Gabool resigned from his provincial assembly seat of PS-100 over what appeared to be 'unaddressed complaints' from the party's provincial representatives and district leadership.

Gabool had previously made headlines two days before the March 3 Senate elections when he had announced to not vote for the PTI's candidates.

In his resignation addressed to the Opposition Leader in Sindh Assembly Haleem Adil Sheikh, Gabool maintained that, "On every floor of party, I always said my voice up there. My constituency of (PS-100) (NA-242) MNA Mr Saif Ur Rehman always ignored me and people of my constituency and he always did whatever he wanted for the development work of the people.

"Still, nobody has taken any action on my statement at all. Therefore, for the benefit of the nation and their request, I [am] myself giving resignation from the seat of member provincial assembly of Sindh, PS-100."

However, according to sources in the PTI, Gabool's resignation was a pressure tactic and nothing else.

"He was to resign either to [the] parliamentary leader of the party or speaker Sindh Assembly. There is no sense of sending his resignation to the opposition leader," a senior PTI leader told The Express Tribune.

In a video message on March 1, Gabool announced that he wouldn't vote for the party's candidates, saying that "a few candidates were given tickets in exchange of money". He also said that the Constitution of the country allowed him to vote for any candidate.

The next day, on March 2, Sindh Assembly turned into a battleground after lawmakers belonging to the PTI and Pakistan Peoples Party (PPP) got into a physical brawl over the development.

Gabool was eventually 'taken into custody' by his own party members from the assembly premises and whisked away from the scene in a car.

The PTI MPA who was elected from the PS-100 Karachi East-II constituency in the 2018 general elections. 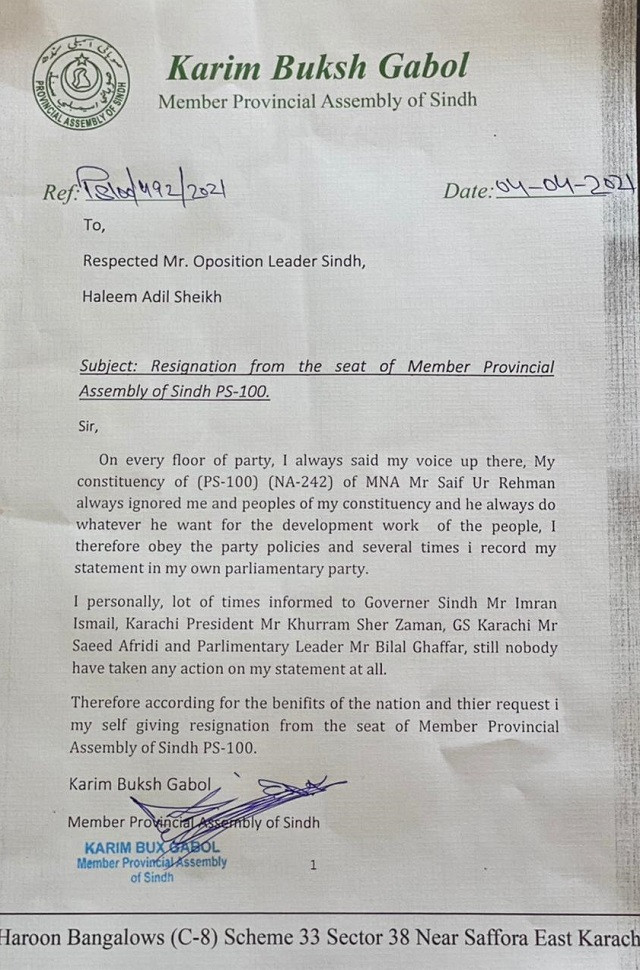 A copy of the resignation available with The Express Tribune