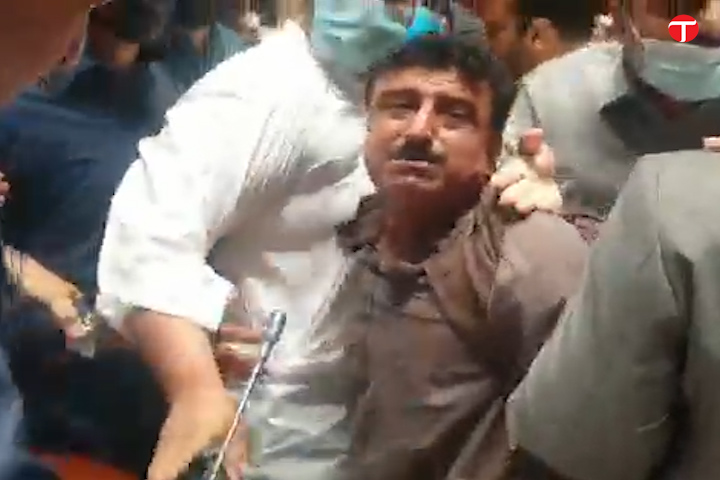 The Sindh Assembly turned into a battleground on Tuesday after lawmakers belonging to the Pakistan Tehreek-e-Insaf (PTI) and Pakistan Peoples Party (PPP) got into a physical brawl over a disgruntled PTI MPA, eventually 'taken into custody' from the assembly premises by fellow party lawmakers.

After a brief fight on the floor of the house, the PTI members managed to whisk away Karim Bux Gabol - the PTI MPA who a day earlier announced he won't be voting for his party in the upper house elections, scheduled to be held tomorrow (Wednesday).

Gabol - who was elected from the PS-100 Karachi East-II constituency in the 2018 general elections - in a video released on Monday claimed that his party has given Senate tickets to candidates in exchange for money, adding that the Constitution of the country allows him to vote for any candidate.

The situation in the assembly turned ugly when Gabol was approached by fellow PTI MPAs including Khurrum Sher Zaman, Saeed Afridi and Bilal Ghaffar even before he had taken his seat, and asked him to come with them.

After a brief argument, the PTI MPAs tried to take Gabol out at which point the PPP MPAs intervened in an attempt to resolve the matter.

However, the situation further escalated and led to a scuffle between the PTI and PPP lawmakers.

“This is not the way. Speaker Sahiba, they are kidnapping an MPA from the house,” shouted Mukesh Kumar Chawla, urging Deputy Speaker Rehana Leghari, who was chairing the session, to intervene.

Zaman and other PTI MPAs asked the PPP lawmakers to not intervene as the issue was "an internal party matter".

However, the resistance led to a physical fight between the members of the two parties when the PPP lawmakers tried to free Gabol from the custody of his fellow party MPAs.

During the brawl, a few PTI MPAs surrounded Gabol and asked him to record a statement about how the PPP forcibly had him record yesterday's video and asked him to vote against his own party candidates in Senate.

In a video, a visibly harassed and confused Gabool is seen saying that he was ‘kidnapped’ by members of PPP.

The house was dominated by both the opposing parties' sloganeering, while women MPAs stood aside astounded, attempting to get the brawling MPAs off each other from time to time.

However, the PTI MPAs eventually managed to 'take Gabol into custody' and drive him out of the assembly premises.

Speaking to the media following the incident, the PPP lawmakers said that there was an imminent threat to Gabol’s life, who was forcibly taken away by the PTI MPAs from the assembly proceedings.

“Every MPA is free to vote in the elections. This is not the way to kidnap members from the house,” Shehla Raza said.

Later, Leader of the Opposition in the Sindh Assembly Haleem Adil Shiekh claimed that Gabol had been ‘released’.

“Gabol has given a statement clarifying that the PPP ministers and MPAs had kidnapped him and had forced him to record a video against his own party,” Shaikh told the media outside the assembly.

Two other PTI MPAs - Shahar Yar Khan Shar and Aslam Abro - who had also released a video on social media saying they will not be voting for their party in the upcoming Senate polls were also sitting in the session.

It may also be mentioned that all the three disgruntled PTI leaders had come in the same vehicle to attend the assembly session.