Gilani to lead opposition in Senate

PML-N unhappy with the development, says it will dent the alliance

PPP’s Yousuf Raza Gilani on Friday was officially appointed the Senate opposition leader, hours after he filed the application for his candidacy, in what appears to be the final nail in the coffin of his party's shaky alliance with the PML-N.

The secretariat of the upper house of issued a statement notifying the PPP leader's appointment.

However, Gilani's appointment did not go down well with the PML-N whose leader, Ahsan Iqbal, told reporters in Lahore that by applying for the slot of the Senate opposition leader, the PPP had dented the alliance, the Pakistan Democratic Movement (PDM).

The PPP had 21 seats in the upper house and was assured of support by the ANP and the BNP-M. The PML-N had 18 seats, whereas the JUI-F had five.

Gilani was accompanied by PPP leaders Sherry Rehman, Rubina Khalid and others during the submission of the application. 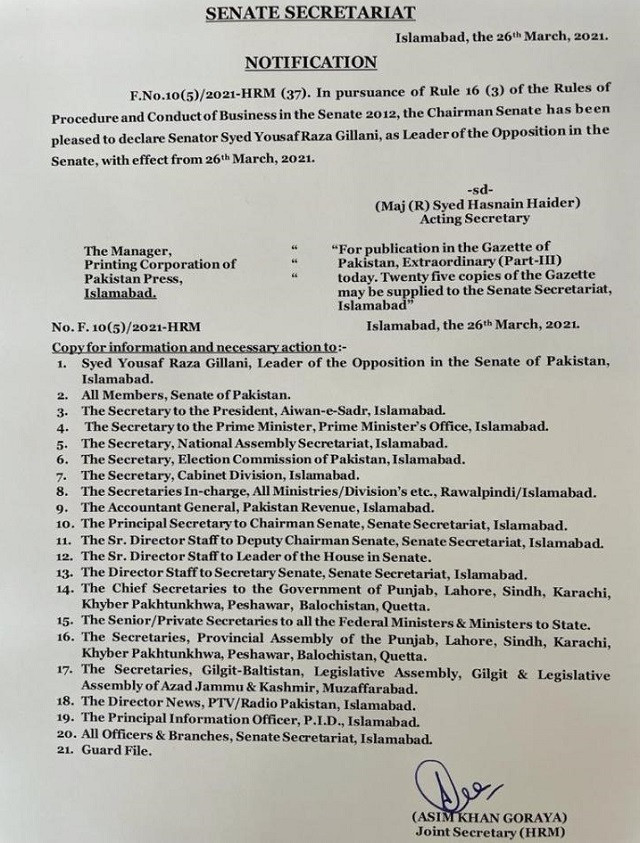 A copy of the notification available with The Express Tribune

“The PDM won in every by-election it participated in," he added.

The former PM said it had always been the PPP's stance that the electoral process should not be abandoned.

Gilani said his party had completed preparations for the PDM's long march and sit-in on March 26, but in the latest meeting of the alliance, a view came forward that the long march would be of no benefit without resignations from the assemblies.

“This was a new thing for us and because of it, there a difference of opinion,” he added.

The PDM allowed the PPP to discuss this "new scenario" in its Central Executive Committee (CEC) meeting, Gilani said.

“PPP leader Raja Pervez Ashraf has been tasked with presenting the party's viewpoint regarding the Senate leader of the opposition in a meeting of the PDM steering committee,” he added.

“He [Ashraf] has not insisted on the position being given to the PPP at the time so that the Senate chairman election, for which Gilani has already been nominated by the PDM, would not be compromised.”

Gilani further said party chairman Bilawal Bhutto Zardari believed that the opposition leader's position should be held by the PPP as it was the largest opposition party in the Senate.

“Under the same formula, the PML-N was given the offices of the opposition leader and Public Accounts Committee chairperson in the National Assembly,” he added.

The former premier said PPP Co-Chairman Asif Ali Zardari then contacted various PDM leaders on the issue, but they refused the proposal for the opposition leader's office to be given to the PPP, saying a decision on the matter had already been made.

"Several parties contacted us saying that it was our right [to hold the opposition leader's office],” he said.

Gilani added that they told Zardari that they were ready to vote for the PPP candidate.

“During negotiations, the JI, the ANP, two [former] Fata members and Dilawar Khan's group agreed to vote for me.”

Gilani added that the PPP bagged 30 votes and he was elected the leader of the opposition.

“In the eyes of the public, I have already won the Senate chairmanship. But today I was named the leader of the opposition."

Gilani said the PDM saw a ceasefire in the last few days and during conversations between the PPP, the PML-N and the JUI-F leadership.

“It was decided that the opposition would be kept intact and statements would not be issued against each other,” he added.

"So we expected there wouldn’t be criticism from the other side. Today, a senior office-bearer said a majority had been formed after taking people from the BAP.”

The former premier said calling it a “government opposition” was inappropriate and and must be avoided to keep the opposition alliance intact.

PML-N's Iqbal, accompanied by fellow party leader Rana Sanaullah, told the media in Lahore that the PPP's move was against the objectives of the PDM.

“If the post [of Senate opposition leader] was so important for the PPP, they could have asked us, and we would have given it to them," he added.

The PML-N leader maintained that smaller parties in the alliance had fully supported Azam Nazir Tarar as per the decision of the alliance.

"Twenty seven senators had expressed their confidence in Tarar.”

Regretting that the ANP had also supported Gilani, Iqbal announced taking up the matter with the PDM leadership. "The ANP took a unanimous decision [against the desire of the alliance]," the PML-N leader observed.

“The PDM is not [a] homeopathic [alliance], but is very lethal," he said as he warned that those backtracking from the alliance's objectives will remain in loss.

Iqbal added that the leaders of the alliance will continue to play their role in the Senate and the National Assembly.

“Everyone knows who asked the senators for support [to vote for Gilani]."

Speaking on the occasion, Sanaullah said it was political retaliation.

“The [alleged] videos of the NAB chairman are with Shehzad Akbar,” he added.

The opposition alliance has been battling differences after the PPP disagreed on making en masse resignations from assemblies conditional to the long march.

The party's co-chairman, Asif Ali Zardari, also asked PML-N supremo Nawaz Sharif to return to Pakistan from London, and face jail together with everyone.

The other hotly-contested issue between the two parties was the nomination for the post of leader of the opposition for which both the parties insisted on their candidates.

The PML-N had accused the PPP of deviating from its earlier commitment made during a PDM meeting that the opposition leader in Senate would be from the PML-N. On the other hand, the PPP maintained that the position should go to it as it was the largest opposition party in the house.

Pfizer begins study of oral drug for prevention of Covid-19