According to a press release issued by NAB, a meeting was held to discuss the hearing as well as the recommendations of the National Command and Operation Centre (NCOC), the body overseeing the country's Covid-19 response.

It was observed that the NCOC had banned all types of gatherings.

“The decision has been made in view of NCOC guidelines against coronavirus and in wider public interest,” the notification read.

Reacting to the NAB announcement, Maryam told reporters at her Jati Umra residence that she would not become an easy prey for the anti-graft body anymore.

“The days for using NAB for political victimisation are coming to an end,” she added.

The PML-N vice president questioned if her appearance before NAB officials had been put off, then why was Prime Minister Imran Khan allowed to preside over a meeting.

“If there is rule of law in the country, the PM House should also be closed.”

Earlier in the day, the LHC disposed of a NAB petition asking the court to direct Maryam to appear at her hearing on Friday at the bureau's office in connection with the Jati Umra land and Chaudhry Sugar Mills cases without party activists and with a maximum of two persons.

The authority had contended that two persons could act as her support staff, of which one may be an accountant to assist her.

As the proceedings commenced, an LHC bench headed by Justice Sardar Muhammad Sarfraz Dogar asked NAB Special Prosecutor Syed Faisal Raza Bukhari “under what law the court could pass an order to a person, directing him/her to do this or not to do that”.

Bukhari told the court that NAB wanted the implementation of Article 5 of the Constitution as Maryam belonged to a major political party and she had been hurling threats through her statements about her visit on March 26.

The PML-N leader, he added, had been inciting people by saying “it is not the time for sacrifices but accountability”.

The NAB counsel further said the anti-graft body sought the rule of law outside its Lahore office.

He added that the respondent had apparently planned to come to the NAB office with a view to sabotage the investigation process and evade any hearing that might take place before the authorities.

Bukhari argued that the PML-N posed threats to NAB whenever it issued notices to them.

Justice Dogar remarked that the law was very clear on someone not obeying it. “The state will do [as it pleases] in accordance with the law if someone violates it,” he noted.

"Don’t ask the court to intervene in such political matters," the judge told the NAB prosecutor.

“It is your problem, not of the court.” 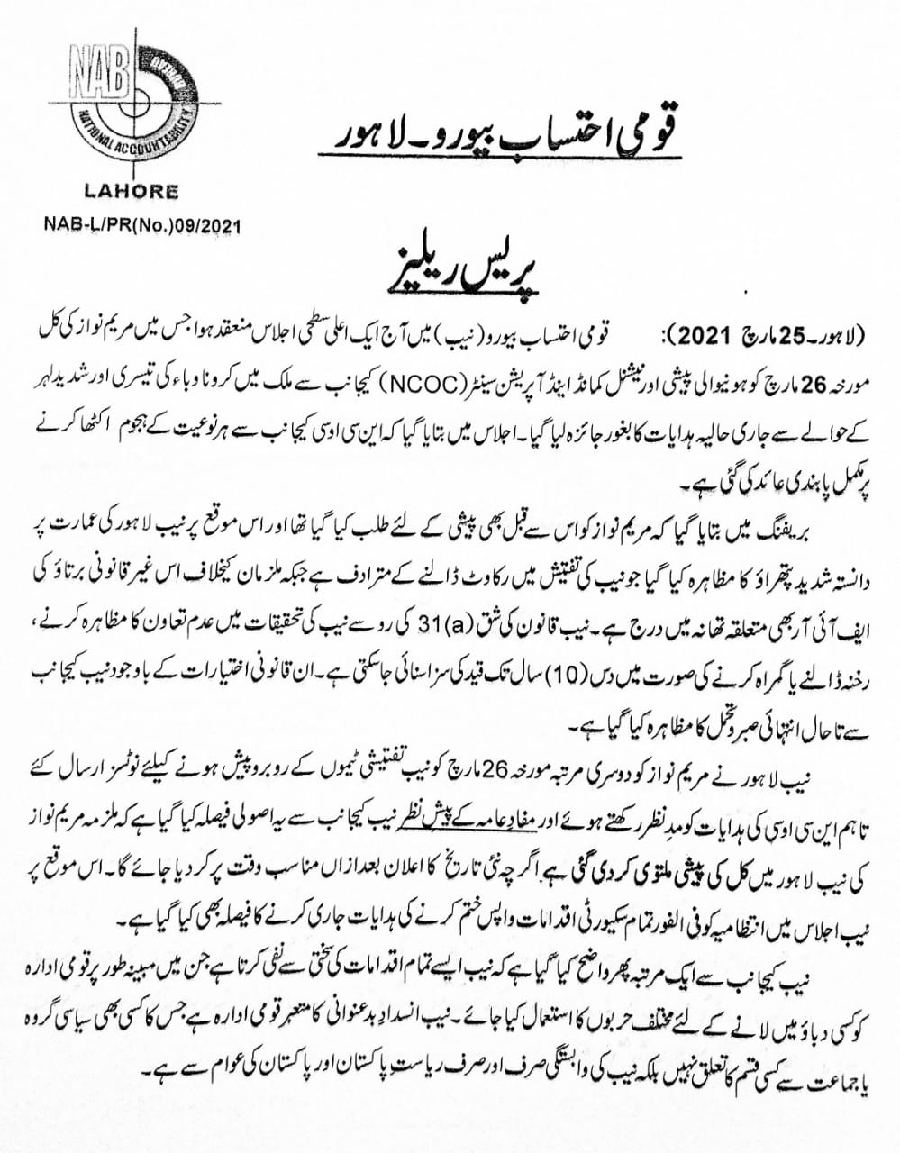 Subsequently, the court disposed of the NAB petition with the observation that the law would take its own course if someone violated it.

Also on Thursday, the leaders of the Pakistan Democratic Movement (PDM) – an alliance of opposition parties – reiterated that they and their activists would accompany the PML-N leader to the hearing.

They warned the government against creating any obstacles for Maryam.

"We warn the government against creating any hurdles in the way of Maryam's convoy," said PML-N leader Rana Sanaullah while addressing reporters in Lahore, alongside PPP’s Qamar Zaman Kaira and JUI-F’s Abdul Ghafoor Haideri.

Sanaullah further said Maryam would leave for the NAB office with PDM leaders from her Model Town residence.

Speaking on the occasion, Kaira again confirmed that PPP activists would be accompanying Maryam to the graft-buster's Lahore office during her appearance.

He added that the responsibility of impeding her arrival before the bureau would be upon the government.

Kaira went on to say that the government had lost its footing, indicating that it should avoid creating any trouble [for itself].

“The government thinks that the leaders can be stopped from their campaign with such notices, but we won't let it happen. We won't let victimisation rule the roost and we are united against it," he added.

He asked for establishing a system and legislation for transparent elections and accountability in the country.

The PPP leader clarified that the leaders were not heading towards the NAB office to launch an attack on it.

JUI-F's Haideri asked, "Are your [the government's] efforts aimed only at humiliating the opposition leaders?" He said it was the PDM leaders’ decision to appear before NAB however, "appearing before an institution like NAB is a humiliation unto oneself." During its hearing on Wednesday, the LHC had granted pre-arrest bail to Maryam till April 11.