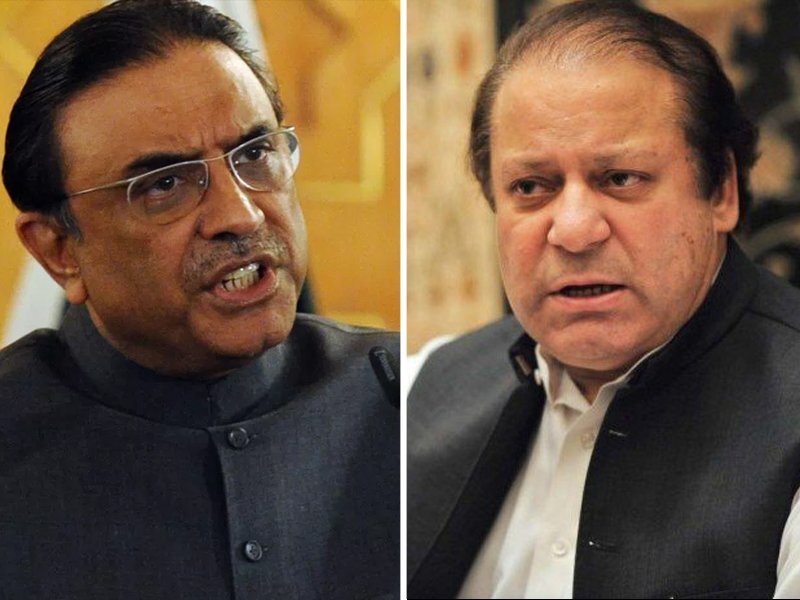 PPP Co-Chairman Asif Ali Zardari on Tuesday urged PML-N supremo Nawaz Sharif to return to Pakistan from London to reinforce the opposition against the PTI-led government and if necessary the leaders of the Pakistan Democratic Movement (PDM) would go to jail together.

Zardari’s call for return of Nawaz, who has been living in self-exile, stunned the participants of the PDM leaders who were in the federal capital to discuss the fate of the much-debated long march on Islamabad to unseat the PTI-led coalition government.

The meeting witnessed heated exchanges on several issues, including tendering resignations from assemblies, return of former prime minister Nawaz Sharif and defeat of opposition candidates in the election for Senate top slots.

In the meeting, according to sources, the Pakistan Peoples Party (PPP) leadership refused to tender resignations of its lawmakers. PPP Co-chairman Asif Ali Zardari also demanded of PML-N supremo Nawaz Sharif, who is in London for medical treatment, to return to Pakistan.

PDM President Maulana Fazlur Rehman raised the issue of Maulana Abdul Ghafoor Haideri’s defeat. Haideri, who was present in the meeting left early. On his way out, he asked by the reporters if there were bitter talks in the meeting, he replied there was no such thing.

Also read: Not in favour of en masse resignations: Bilawal

“There are talks,” Haideri told the media. “When 10 parties sit down together, they will present their respective positions.” When asked further if there would be any consensus, he replied that after discussing issues, the position will “come before you”.

According to sources, Zardari wanted Sharif’s return to Pakistan. He also raised the issue of the absence of former finance minister Ishaq Dar from the Senate session. He told the PDM leadership that the leaders should be prepared to go to jails in their struggle.

“Mian [Nawaz Sharif] Sahib, please come back to Pakistan. If we want to fight, we will all have to go to jail,” a source quoted Zardari as addressing the PML-N Quaid during the meeting. Zardari also reminded the opposition leadership that he had spent 14 years in jails.

On the long march issue, Zardari referred to a rousing welcome of former prime minister late Benazir Bhutto in 1986 and in 2007, saying that the party had mobilised the entire country on those occasions. “We have to plan the long march as we did in 1986 and 2007.”

“We mobilised the entire nation when Benazir [Bhutto] returned to Pakistan in 1986 and then in 2007,” he noted.

“The long march will have to be organised in the same manner as our preparations in 1986 and 2007,” he added.

“The struggle against the establishment must carry on for democratic stability.”

Zardari urged Sharif to return to the country along with former finance minister Ishaq Dar. "We will then all fight together," he said.

He pointed out that Dar did not even come to cast his vote.

"When you return to Pakistan, we will hand over our resignations to you.”

Zardari also said that he had no fear of the establishment, but the struggle against the establishment should be for the consolidation of democratic institutions rather than for personal vanity. He said he was ready to “fight” and added that if Sharif was ready too, he would have to return to Pakistan.

According to the source, he then addressed Nawaz Sharif, saying: “We are ready to struggle to our last breath, but my domicile is different. Mian Sahib, you represent Punjab. If you [Sharif] are ready to fight, be it a long march or the no-confidence motion, you will have to return home.”

Pointing out the demerits of staying abroad, Zardari asked Sharif how could he solve people’s problems, when he in his tenure in the government did not raised the salaries. On the other hand, he added, the PPP government increased salaries and passed 18th Amendment and the NFC Award.

During the meeting, most of the constituent parties including the PML-N and the Jamiat Ulema-e-Islam-Fazl (JUI-F) insisted that success of the long march was linked to resignations of the lawmakers from the national and provincial assemblies.

Arguing against resignations, Zardari emphasised that such a move would tantamount to strengthening the establishment and Prime Minister Imran Khan. He also took a firm stand that the PDM summit should take any decision which “separate our path”.

The PPP, he said, is a democratic party, adding: “We do not fight from the mountains but in the parliament”. He warned the alliance that any chaos among the opposition’s ranks would benefit the “enemies of democracy”.

Responding to Zardari’s remarks, Maryam Nawaz said that the PML-N was the largest political party of the country. She stressed that not just the party workers and leaders but the whole of country prays for the long life and security of PML-N Quaid Nawaz Sharif.

On personal note, Maryam told Zardari: “The way Bilawal Bhutto Zardari is not just seen as your son, I should also be not seen just as a daughter of Nawaz Sharif. I am a PML-N worker, I have decided that I will stay here and fight.”

She told the meeting, according to the sources, it was the decision of the party that until the health of Sharif recovered, he should not return from London. “Nawaz Sharif faced the worst with courage, bravery and steadfastness. No one can blame him for not facing jail,” she said.

According the sources, Maryam pointed out Zardari that he was attending the PDM meeting via a video link, while remaining inside the country. Similarly, she added that Nawaz Sharif was also attending the meeting through a video link.

While responding to the PPP Co-chairman’s comments about Dar, the PML-N vice president reminded that her party’s 83 National Assembly members and 17 senators voted for the PPP’s candidate “yet you are mentioning one lost vote”.

While Fazl demanded accountability from the PDM parties for the defeat of Haideri in the election for the post of Senate deputy chairman. He pointed out the difference between the votes polled in favour of PPP’s Yousuf Raza Gilani and JUI-F’s Haideri. 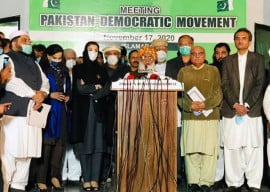 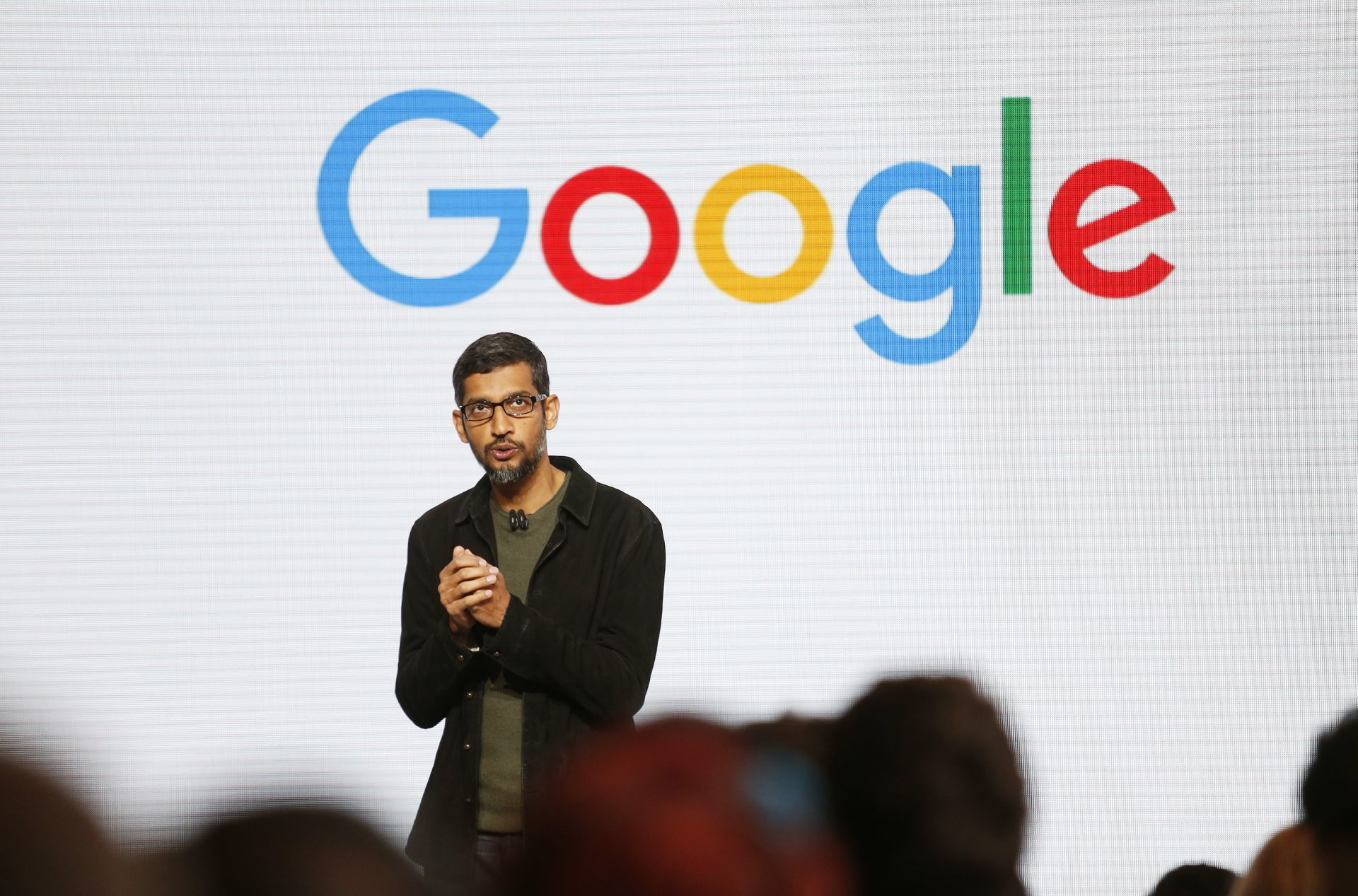