Malaysia overturns ban on use of 'Allah' by non-Muslim publications

Under the programme, mobile vans would visit different areas of major cities to feed poor and underprivileged people

Imran Khan, Pakistan's 22nd prime minister, who before taking office was known for caring for those who have so little, has launched “Koi Bhooka Na Soye" programme under the umbrella of the Ehsaas poverty alleviation.

One of the cornerstones of the ruling Pakistan Tehreek-e-Insaf's (PTI) manifesto is to rid the country of poverty and PM Imran has tried aggressively to push initiatives for the common man.

Under the programme, mobile vans would visit different areas of major cities to feed poor and underprivileged people. Initially, it has been launched in the federal capital and would soon expand to other cities of the country.

Addressing the launching ceremony in Islamabad on Wednesday, Prime Minister Imran regretted that there were many areas in Pakistan where people go to bed hungry. "Most people [in Pakistan] are on daily wages and when they don't get their wages, they have to sleep empty stomach," he added.

He said that the government is starting the programme in Islamabad at the moment but it would soon reach other cities of the country. "One day, these vans would feed people across Pakistan."

Lauding the facilities given to people in Panagah (shelter homes), the premier said that many people have come forward and said that they want to be a part of the government's initiative. "People generously donate in Pakistan," he added.

The premier also inspected one of the mobile vans and distributed meal boxes among the needy on the occasion. 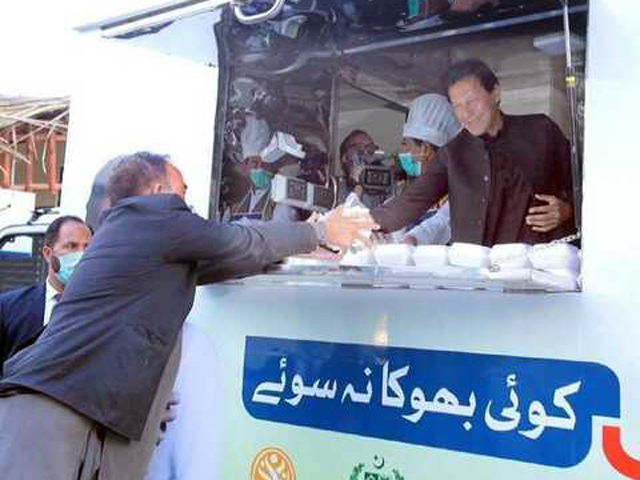 In his address, the premier maintained that the government was providing health insurance to millions of people in Khyber-Pakhtunkhwa (K-P), Punjab and Gilgit-Baltistan (G-B), adding that now the people of these regions can avail themselves medical facilities in any hospital public or private.

He said that in June, the government will introduce a programme under which money will be transferred to the accounts of 30 million people so that they keep up with the rising inflation and afford basic commodities such as ghee and flour etc.

"Farmers will also receive direct subsidies to pay for fertilisers. It will be a revolutionary step," the premier further said.