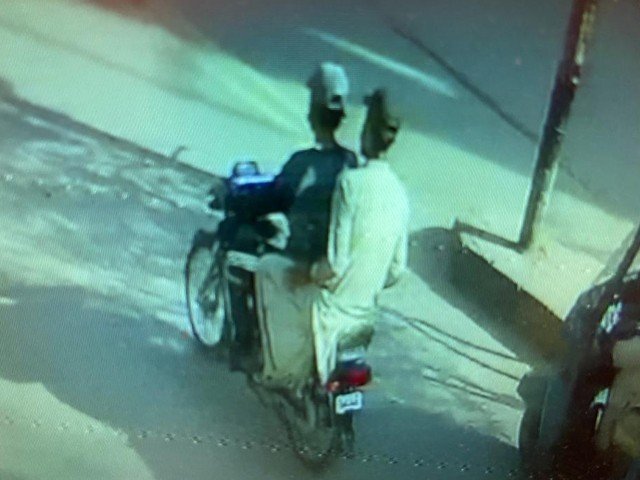 CCTV footage screengrab of the suspects involved in attack on the Chinese staffer. PHOTO: EXPRESS
KARACHI:

At least two people, including a Chinese staff, sustained injuries after unidentified assailants opened fire at a vehicle of Sindh solid waste management in Karachi's Lyari neighbourhood on Tuesday.

The suspects, riding a motorcycle, fired at the white Hi-roof vehicle near the DMC School area and fled from the scene.

A passerby, later identified as Khalid, was also injured and moved to a nearby hospital.

DIG Police South Javed Akbar Riaz, SP City Abrez Ali Abbasi, and other officers and personnel of police and Rangers reached the scene and cordoned off the area.

DIG Riaz told the media on the occasion that the Chinese staffers accompany the solid waste management teams to different areas of the metropolis as part of a project, and they were on their routine visit to Lyari today.

He further said that the incident is being investigated, adding that police have found two 9mm casings from the scene.

The casings, he added, will be sent for forensics. The police is also in the process of conducting further information.

Earlier in December, Police and security officials disarmed a bomb planted on the car of a Chinese restaurant owner in Karachi's posh Clifton locality near Bilawal House.