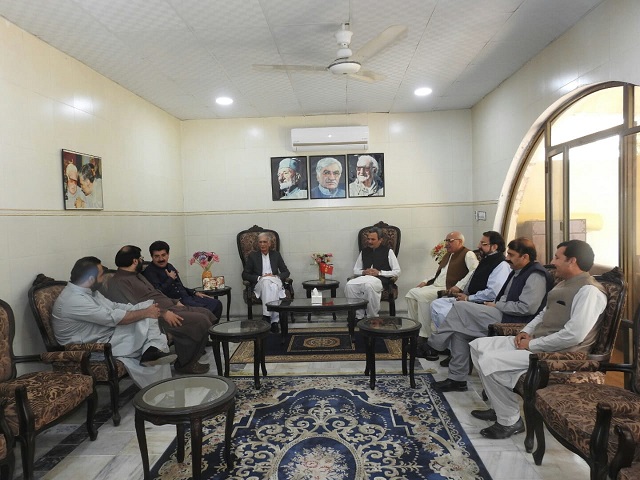 Defence Minister Pervez Khattak in a meeting with the ANP representatives in Peshawar on March 7, 2021. PHOTO: EXPRESS
PESHAWAR:

In a surprise move, a government delegation, headed by Defence Minister Pervez Khattak, visited the opposition Awami National Party on Sunday, to garner support for the March 12 election of the Senate chairman.

The ANP is a part of the Pakistan Democratic Movement (PDM) – an alliance of 11 opposition parties formed to dethrone the Imran Khan government.

Speaking on the occasion, Hoti said that Wali Bagh is the centre of the Pakhtun national movement, and thanked the delegation for their visit.

Hoti added, "ANP is part of the PDM [but] we appreciate your visit. All decisions in the party are made through consultation. We will also consult the party about your request."

He was of the view that resolving political issues through political means was in the best interest of the country and the nation.

The election for the post of Senate chairman will be held on March 12 after the completion of Sanjrani's three-year term.

On March 4, Premier Imran announced Sanjrani as the candidate for Senate chairmanship.

The announcement came a day after the hotly contested Senate elections in which Yousaf Raza Gilani, the PDM’s joint candidate, was elected Senator from Islamabad by defeating Abdul Hafeez Shaikh of the ruling party.