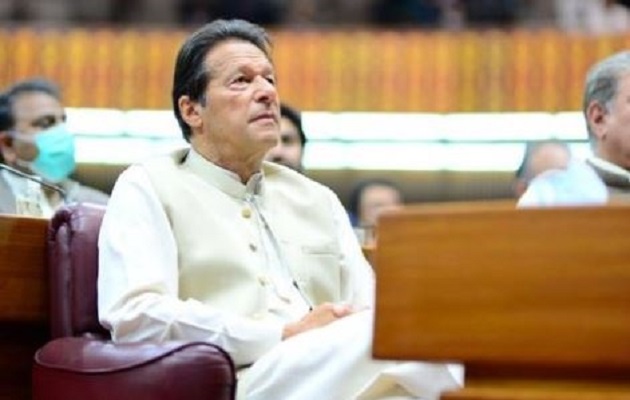 The prime minister voluntarily decided to seek a fresh vote of confidence from the house after the shock defeat of PTI candidate Hafeez Sheikh at the hands of PDM’s Yousaf Raza Gilani in the March 3 Senate elections which the opposition said was a vote of no-confidence against Imran Khan. It was also a preemptive move because, according to the premier, the opposition planned on using the vote of no-confidence as the Sword of Damocles over his head.

The house convened around midday. After procedural rituals, Foreign Minister Shah Mahmood Qureshi tabled the resolution to seek the vote of confidence for Premier Imran Khan who needed a simple majority to retain his office.

Jubilant scenes inside the National Assembly as Prime Minister Imran Khan wins a vote of confidence motion with 178 in his favour.#etribune #ImranKhan

Subsequently, the speaker directed the lawmakers who wanted to cast their votes to make their way to another chamber inside the house, where staff recorded their votes.

Following the voting, the speaker announced the results. “The resolution is passed. A total of 178 votes were cast in favour of the resolution. Prime Minister Imran Khan has the support of the house,” he said. “Today, the prime minister has secured 178 votes, while he was elected leaders of the house in 2018 with 176 votes,” he added amid thunderous desk thumping and vociferous sloganeering from the lawmakers.

Taking the floor, a beaming prime minister thanked all allied parties for reposing trust in him. “I’d also like to congratulate my party which came out stronger during this challenging time,” he said, adding that he could tell that his “team” was hurt by the defeat of Hafeez Sheikh in the Senate elections. “It was good to see you as a team,” he said, predicting that his team would go from strength to strength. 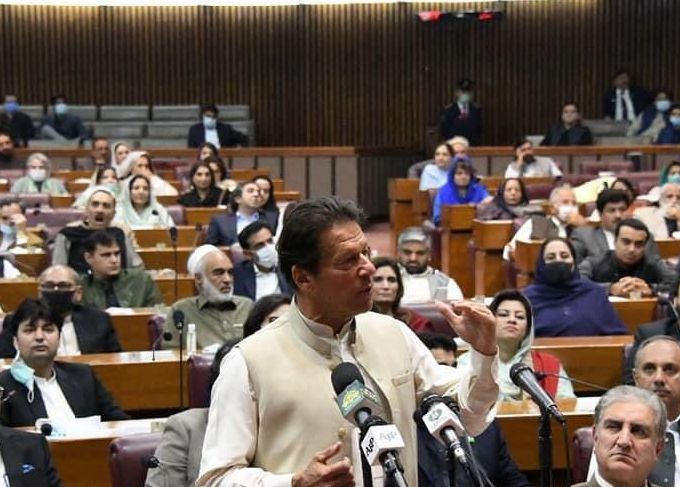 The vote of confidence came a day after the Election Commission of Pakistan issued an unprecedented rejoinder to the prime minister for his criticism of the conduct of Senate polls calling it a “great elections”.

“If this election was carried out well by you [ECP] then what is a bad election,” said the prime minister. “I request the ECP to get a briefing from our agencies on what goes on behind the scenes in the elections," Imran said, referring to the alleged corrupt practices.

Premier Imran also fired a broadside at his chief political rivals calling Asif Ali Zardari and Nawaz Sharif thieves who were blackmailing his government into dropping corruption cases against them. “Corrupt practices have earned Zardari the slur of Mr. 10 per cent globally,” he said. “Nawaz Sharif had faked sickness to flee the legal consequences of his loot and plunder.”

The prime minister said the political elite has only personal interest close at heart. “They [opposition parties] tried to sabotage legislation required to get out of FATF grey list and linked its support to changes in the accountability law,” he said.

Imran also hit out at Yusuf Raza Gilani, who outvoted Hafeez Shaikh of the ruling party in the Senate elections, as one of the most corrupt politicians in the country’s history. “Compare his current assets with what he owned before becoming prime minister – and difference will become clear.”

He defended his ruthless accountability campaign saying the future of coming generations hinged on eradication of corruption. The PTI government has drawn a lot of flak from the opposition for its economic policies which have triggered seemingly unbridled inflation.

In his speech, the prime minister, however, sought to assuage concerns saying the country was on course to economic recovery. “The current account is improving, while the rupee is strengthening against the dollar without government’s intervention,” he added.

The prime minister conceded that inflation was the biggest challenge for his government. “Our economic team is doing everything it can to rein in inflation," he said.

Live Stream: Prime Minister of Pakistan @ImranKhanPTI at National Assembly of Pakistan in Islamabad for Vote of Confidence (06.03.2021)#PrimeMinisterImranKhan https://t.co/G7E6C2xXHo

Earlier after announcing the results, Speaker Asad Qaiser gave the floor to MNA Amir Liaquat, who recited poetry in praise of Imran Khan. After him, MQM's Khalid Maqbool Siddiqui took the floor. He congratulated him and said now it is the premier’s turn to give this trust back to the nation.

Women Parliamentarians in the lobby waiting to go and vote for #PrimeMinisterImranKhan! pic.twitter.com/i5YqSWHAea

“It time to consult and seek an opinion from your allies during important decision-making process,” he stressed adding that if nothing else, then at least promise us a dream where a farmer can be represented by a farmer in the assembly, not a landlord.

“Let us pave the way for a new Pakistan, not just dream of it,” Siddiqui said. “The MQM has stood by the government and will always stand by it, no matter what,” he added. “You’ll always have our back because we want to see Pakistan a country our founding fathers envisioned it to be.”

Taking the floor, GDA leader Fahmida Mirza reassured the government that its allies would always stand with the prime minister whenever there was a threat to the continuity of democracy despite any grievances they might have.

Mirza then went on to criticise the way in which the Senate elections were conducted, questioning whether the ECP was able to guard the process against “corrupt practices”.

She also slammed the opposition for its damaging the prestige of the house with their unruly behaviour. “What lesson are you giving to the people? I am sure they have lost interest in politics,” she added.

Treasury lawmakers from PTI also spoke in the house, calling the overwhelming support for the vote of confidence a trust in Imran Khan’s vision for a corruption-free Pakistan.

PM Imran Khan addresses the floor of the National Assembly after...

Victory of the truth. Alhumdulilah