PDM to decide 'when and where' to table no-confidence motion, says Bilawal 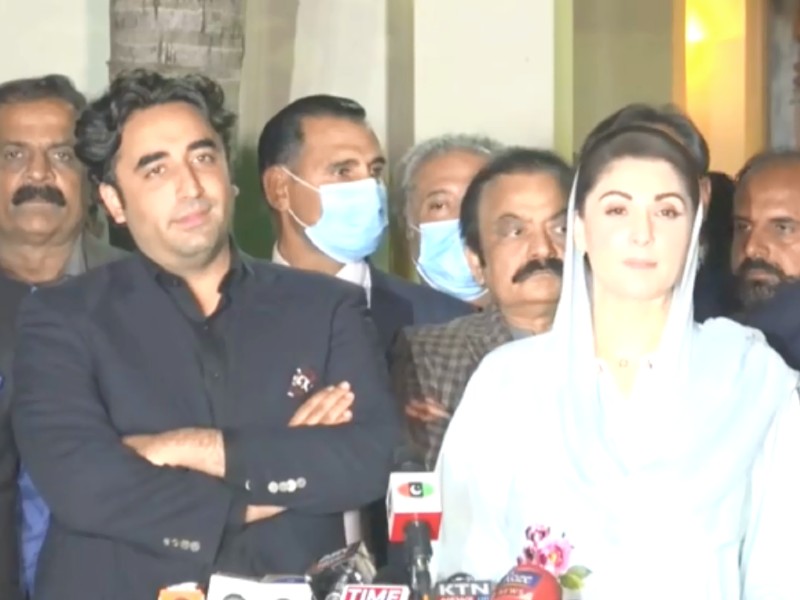 Bilawal and Maryam spoke to the media after holding a meeting here. Their talks came a day after Syed Yusuf Raza Gilani of the PPP – a joint candidate of the PDM – dealt a severe blow to the government, defeating Finance Minister Abdul Hafeez Shaikh in the Senate election from Islamabad.

Prime Minister, in an address to the nation on Thursday, said he would seek vote of confidence from the National Assembly on Saturday (tomorrow) and warned that he would “not spare anyone of you [opposition leaders] even if I lose power, until you return the nation’s money”.

Commenting on the speech, Bilawal said: "Imran Khan's choice of words shows that he is nervous now." About the election victory of Gilani on Wednesday, he said that the entire nation rejoiced at the defeat to the "puppet" government.

Bilawal had earlier said that Imran was seeking vote of confidence in an effort to save face. "This is all a drama,” he said, while speaking at another press conference along with two former prime ministers, Gilani and Raja Pervez Ashraf.

“This puppet show will soon end. He [prime minister] has lost the confidence of the National Assembly and has been rejected by his own MNAs [National Assembly members] and allies. You must submit your resignation," he added.

Bilawal stressed that the decision for tabling no-confidence motion against the prime minister would be taken with the consensus of the PDM. However, he added: “We believe, we have to save Punjab first. But all the decisions would be taken by the leadership of PDM with consensus.”

On the Senate elections, Bilawal said the premier claimed that he was aware about which lawmakers had not voted for Hafeez Shaikh. “Why don’t you expel them from the National Assembly and your party then?” he asked. “The parliamentarians don't see a future with the PTI,” he added.

Separately, at a General Council meeting of the PML-N, the party leaders fired a broadside against the prime minister, saying that after the victory of Gilani, Imran and his political party had no future.

Addressing the meeting, Maryam said that 83 lawmakers of the PML-N voted for Gilani on Wednesday on the directives of the party Supreme Leader Nawaz Sharif. “I say that money did not prevail [in Senate elections]. Rather, the PML-N’s ticket prevailed,” she added.

“What you [PM Imran] have given besides disappointment and bad reputation?” Maryam questioned. “Your MNAs know that you have been brought to power for the first time. Now neither you have any future nor any political party.”

The PML-N leader said that those who thought that the PML-N will disintegrate after the court cases were proved wrong. On the contrary, she added, Nawaz Sharif’s narrative of “respect the vote” had prevailed all over the country.

She said that the PML-N’s culture was also changing. “Workers of Nawaz Sharif will no longer let you steal their votes,” she said, as she congratulated the people of Nowshera, where the PTI candidate lost in the recently-held by-election.

She also referred to the Daska by-poll, where the Election Commission of Pakistan (ECP) has ordered re-poll after irregularities on the election day. “Their graves would be dug in Daska in the re-election,” she added.

The meeting was also addressed by the PML-N Supreme Leader Nawaz Sharif. He congratulated Gilani on his election victory on Wednesday, which, he said, showed that Imran had lost majority in the National Assembly.

Sharif said that the PML-N government made Pakistan an economic power in Asia and led the country on fast track basis to joining the Group of 20 (G-20) countries. “We ended the darkness of load-shedding, we laid a network of roads and motorways,” he said.

On this occasion, former prime minister Shahid Khaqan Abbasi said that “we respect the vote.” Addressing prime minister Imran, he challenged: “Come to the field, the decisive movement is to start on March 26” – a reference to the proposed PDM long march against the government.

On the occasion, PML-N Secretary General Ahsan Iqbal informed the participants about the organisational matters of the party. He also explained the amendments proposed to the party’s constitution, which were approved by the council.

Iqbal also dilated on the preparations for the PDM long march from March 26. “The convoys will reach Islamabad by 3 pm on March 30. All provinces should schedule their arrivals in Islamabad by that time,” he said.