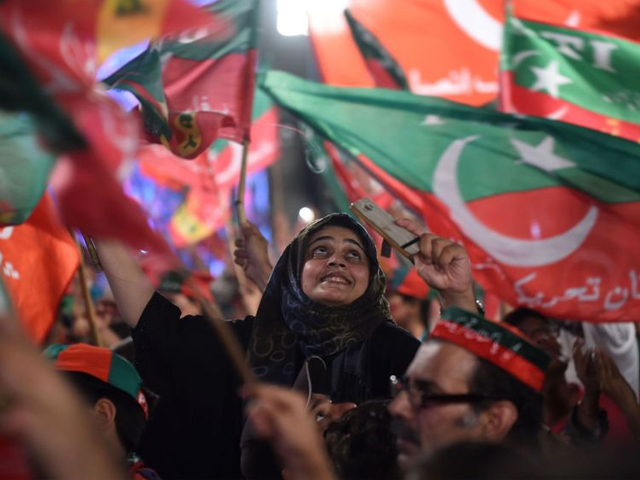 Barring the federal setback, Wednesday’s Senate elections didn’t spring any major surprise as the ruling PTI dethroned its political arch-nemesis, the PML-N, as the single largest party in the upper house of parliament. This was what political pundits had predicted based on the governing party’s numerical strength in the four provincial assemblies.

Lawmakers in the National Assembly and the provincial assemblies of Sindh, Balochistan and Khyber-Pakhtunkhwa voted to elect 37 senators. Punjab had already returned 11 senators unopposed as a result of a rare consensus among the government and the opposition there. In all, 48 senators have been elected to replace the retiring members of the upper house of parliament.

The Senate, where all the provinces have equal representation, is the permanent house, with each member elected for a six-year term. Half of the senators retire every three years and elections are held to elect their replacements.

According to the unofficial results, the PTI won 18 seats, followed by the PPP with eight seats. The Balochistan Awami Party (BAP) won 6; the PML-N bagged five and the JUI-F 3. The MQM-P and the ANP won two seats each, while the Balochistan National Party (BNP) and the PML-Quaid-e-Azam got 1 seat each. Two independents were also elected.

More than 700 members of the National Assembly and three provincial assemblies cast their ballots to elect 11 senators from Sindh, 12 each from Balochistan and Khyber-Pakhtunkhwa and two from the federal capital through secret ballot.

In Punjab, there were 11 seats up for grab but thanks to the efforts of the PML-Q leadership all the senators were elected unopposed. Therefore, no polling was held in the province.

There was separate balloting for seven general seats from each province, besides two seats for women and two for technocrats. There was additional contest in Balochistan and K-P for one seat each for the minorities.

Most of the newly-elected senators are experienced politicians. They include several heavyweights from both the government and the opposition, such as Sherry Rehman, Farooq Naek, Ghafoor Hyderi, Kamil Agha, Sarfaraz Bugti and Shibli Faraz.

In the new Senate, the PTI will be the largest party with 26 members, followed by the PPP with 20, the PML-N with 18, the BAP with 12, and the JUI-F and the MQM with 3 senators each. There will also be six independent senators.

Voting for the two seats from the federal capital was held in the National Assembly. The results showed a shocking defeat of Hafeez Shaikh of the ruling PTI at the hands of former prime minister Yousaf Raza Gilani for a general seat.

However, in the same house, where the ruling coalition has the support of some 180 lawmakers, PTI’s Fozia Arshad defeated PML-N’s Farzana Kausar on a women’s seat.

In an expected win, the PPP – the ruling party in the province – bagged majority of Senate seats, with the joint opposition, comprising the PTI, MQM-P and the Grand Democratic Alliance (GDA), managing to win just four seats.

The PPP won five general seats and one seat each for technocrats and women. The winners are: Sherry Rehman, Jam Mehtab Dahar, Saleem Mandviwalla, Taj Haider and Shahadat Awan of the PPP; Faisal Subzwari of the MQM-P and PTI’s Faisal Vawada on general seats

Palwasha Khan of the PPP and Khalida Ateeb of the MQM-P won the two women’s seats contested this year, while the PPP’s Farooq Naek and PTI’s Saifullah Abro won the seats reserved for technocrats.

K-P also didn’t spring any surprise as the PTI secured 10 seats. The winners are Shibli Faraz, Mohsin Aziz, Liaquat Tarkai, Faisal Saleem and Zeeshan Khanzada of the PTI; Hidayatullah Khan of the ANP and Maulana Attaur Rehman of the JUI-F.

The province’s ruling party, the BAP, which is an ally of the PTI at the Centre, secured eight seats, while the four remaining seats went to the opposition – the component parties of the PDM, according to the unofficial results.

Kamran Murtaza of the JUI-F and Saeed Hashimi of the BAP were elected on the technocrats seats, while Samina Mumtaz of the BAP and independent candidate Naseema Ehsan Zehri succeeded on two reserved seats for women. Danesh Kumar of the BAP won on minorities seat.

Those elected in Punjab are: Saifullah Sarwar Khan Nyazee, Aon Abbas and Ejaz Ahmad Chaudhry of the PTI, Afnanullah Khan, Sajid Mir and Irfanul Haq Siddiqui of the PML-N and Kamil Ali Agha of the PML-Q on general seats.

On technocrats seats the winders are Azam Nazeer Tarar of the PML-N and Syed Ali Zafar of the PTI while Zarqa Suharwardy Taimur of the PTI and Saadia Abbasi of the PML-N won the women’s seats. All the candidates in the province are elected unopposed.