Pave way for smooth polls in Punjab, as all 11 candidates stand unopposed 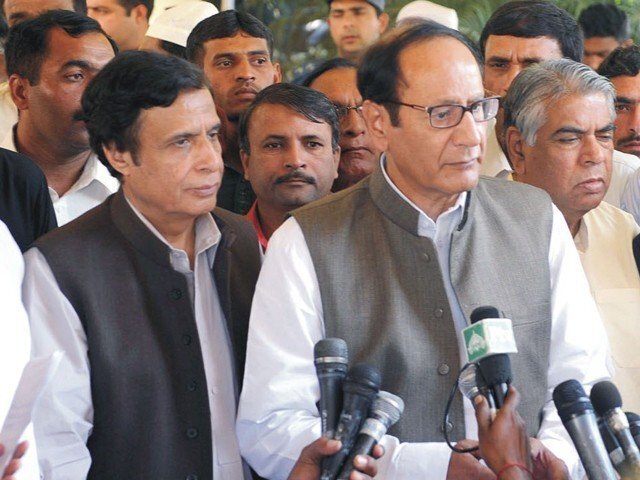 Chaudhrys of Gujrat, who were known as kingmakers during former president Gen (retd) Pervez Musharraf’s era because of their political influence behind the scenes, have brokered a major deal between the government and the opposition parties by paving the way for Senate elections in Punjab without even bothering the MPAs to cast their votes.

Supreme Court’s opinion will apparently have no consequences for Punjab’s Senate race as it has already taken its final shape because of the Chaudhrys, who used their experience and contacts with cross party lines to ensure that every party got its due share in the Senate polls from the largest province of the country.

“It was a ‘local operation’ with Ch Parvaiz Elahi playing a pivotal role … everyone got what they wanted, so it was a smooth win-win situation for all parties,” Senator Mushahid Hussain Sayed told The Express Tribune. “[It] shows political pragmatism can trump political polarisation in the most difficult of times,” the senator added.

Expressing that it was a good sign that political parties showed maturity for common interests, Sayed gave full credit to the Chuadhrys. “Full marks to Ch Shujat Hussain and Ch Parvaiz Elahi for putting their prestige and political capital to make Punjab stand out as a test case for a clean Senate election,” he added.

Federal Minister for Information and Broadcasting Senator Shibli Faraz was of the view that getting seats in Senate as per the parties’ proportional strength in provincial assemblies was the right thing to happen, saying that the debate over use of money to become a senator ended in Punjab because the candidates were elected unopposed.

“It’s good that people were elected unopposed and as per parties’ representation from Punjab; the same should happen in Khyber-Pakhtunkhwa as well,” the information minister said, adding that candidates in K-P were in favour of ending the role of millionaires and billionaires in Senate elections.

To a question about the role of Chaudhrys, Shibli said, “They are political people and know how to achieve objectives by making reasonable arrangements. The Chaudhrys have similar influence in Punjab that Defence Minister Pervaiz Khattak has in K-P.”

However, he said that Elahi, being the Punjab Assembly speaker, had more access to and influence over other parties in Punjab.

PML-N General Secretary Ahsan Iqbal, however, had a different view. “We had votes for 3.5 seats so we decided not to take any chance for the fourth seat and secured our three seats by giving extra votes to each of the three candidates,” Iqbal said.

In addition, Iqbal said, when others saw that the PML-N had a 200% success rate on three seats and under no scenario could snatch any seat, they decided to withdraw their extra candidates to avoid embarrassment. “The PML-N got three senators elected on general seat.”

A PPP parliamentarian, who requested anonymity, also confirmed that it was the PML-Q leadership which played an important role in brokering the deal, saying Elahi reached out to former president Asif Ali Zardari and sought his help in making the arrangements smooth. He refrained from revealing what PPP got through the negotiations.

Though PML-Q’s Moonis Elahi was not available for comments but expressed his views on his Twitter account. “Successful conduct of Senate elections in Punjab; no quarreling, no rigging, no mischief,” Moonis stated, adding that it was another successful innings for the continuity and stability of democracy in Pakistan by the PML-Q.

Surprising as it may seem amid rising political temperature, there will be no polling for the 11 Senate seats from Punjab as all the candidates for three categories — seven general and two seats each reserved for women and technocrats — stand elected unopposed after disqualification and withdrawal of papers by other contestants. Five seats each have gone to the ruling PTI and opposition PML-N, while PTI’s ally in Punjab – PML-Q – grabbed one seat.